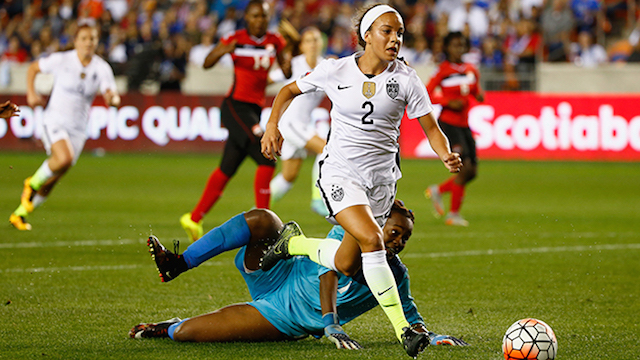 As a variety of high-level club leagues in the U.S. begin to glimpse the finish line to the 2015-16 season, they’re targeting trophies of their own. Whether those are individual or team-wide, the end-of-season awards haul is always the ultimate cherry on top.

And now that there’s one more, we’ve got our eye out as well.

The TopDrawerSoccer.com Player of the Year Award presented by IMG will award its first two winners this August. Taking into account the top performances from the very best amateur American players, the honor will be bestowed on one girl and one boy each who best exemplify the rising tide of American soccer. Through a panel of judges carefully curating these performances over the course of the year, we’ll make an informed decision about the best seasons from the best players.

Today, we begin to narrow the focus.

This periodic column will break down those players who’ve caught our eye already as deserving a spot in the race. This will shift and morph over time, and we will accumulate dozens of worthy candidates over the course of the next few months. But for now, here are two award-eligible players whose 2015-16 seasons are already deserving of merit.

Rice is no stranger to anyone who’s followed youth national team soccer over the years. He made his first splash on the scene with the 2012 id2 International Selection Tour as a U14, and that put him on U.S. Soccer’s radar. He steadily worked his way up the YNT ladder until becoming a mainstay with the U17s in 2014. Rice’s last real act in the U.S. national team system was as a member of the Spring 2015 residency class. Since then, all quiet on the western front.

Rice’s club career had come to something of a standstill with Chicago Magic PSG, where he’d been for years, and a change of scenery seems to have revitalized his promising career. Since switching to RSL before the season, Rice has led the Development Academy in scoring practically since the first day of the year, and he currently boasts 18 goals in 18 games this season. Rice recently committed to Washington, and there’s no reason to think he won’t honor that commitment, but his return to form likely puts him back on a few radars, namely that of MLS and the national team as well. Playing a full season for an MLS academy puts him in line for a Homegrown contract, and playing as well as he has could lead him back into the promised land of national team minutes. He’s certainly earned another shot.

This will be a hard one to dislodge.

It’s not that other girls club players don’t have a shot at this award. The panel will take into account a broad variety of factors, and the fact remains that while Pugh’s rocketed to USWNT super-stardom, she’s not even the leading scorer on her own Real Colorado U18 team (that honor goes to Texas Tech commit Tatum Barton). But there are certainly reasons behind that, and there have been few girls amateur players who’ve had a better year than Pugh’s in the history of girls soccer.

The 2015-16 season ostensibly started when Pugh’s Real Colorado team fell short at the 2015 ECNL Finals, stoking the coals for a revenge tour in 2016. That’s come to pass so far, and while Pugh’s only had time to play a handful of games for her club side, she’s scored eight goals and provided four assists in those games. Further, Pugh’s developed into a mainstay with the U.S. senior team, and the fact that she scored off a header in her USWNT debut earlier this year will nudge her ahead of the rest of the pack in the international category for good. The bigger question during awards season is whether her Real Colorado team can finally shake the monkey on its back and bring home an ECNL national championship. If Pugh can do that between national team camps on her way out the door to UCLA, she’ll have the cake-topper to an unmatched youth career.