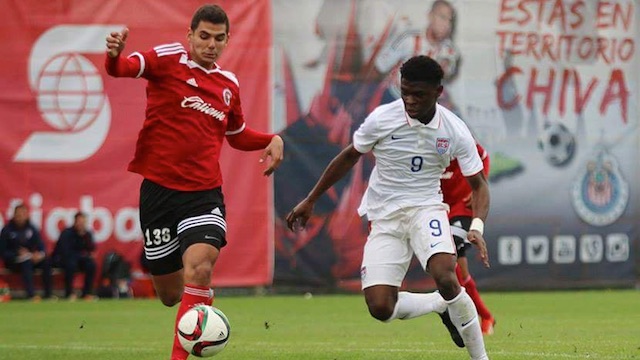 We’ve hit March. It’s nearly kingmaker time in the coveted hunt for the TopDrawerSoccer.com Player of the Year Award presented by IMG.

The award, which is in its inaugural year, honors the top American club players’ performances over the course of the 2015-16 season. That of course takes into account everything, from high-flying club performances to standout moments on the national team. Players who aren’t called up are not penalized, but it certainly doesn’t hurt. You can read about the full requirements for eligibility and our panel’s criteria here.

Our first installment looked at the insane years from Mallory Pugh and Elijah Rice, two players who’ve staked convincing claims to the title this year. But the race is wide open with a couple months still left to decide the winners before the July deadline.

Without further ado, here are a couple players who are pressing their advantage this season.

We probably knew Sabbi was in line for a breakout year when we saw him steamroll the competition en route to a U17 title at last summer’s US Youth Soccer National Championships. During the course of the tournament Sabbi looked every bit the man among boys, and the incendiary forward hasn’t let off during a 2015-16 season that’s turned into an all-out assault on multiple fronts.

With the Magic, Sabbi has one of the best rates of return in the league with eight goals in 10 games played. His Chicago-based club side is a dynamic attacking outfit and relies on Sabbi’s unique blend of speed and technical ability to finish the chances its midfield helps create. There have been few better finishers in the academy over the last couple years than Sabbi.

But he’s also been impressing on the international stage. Just this week, in fact, Sabbi’s been intricately involved with the U20 MNT and its push to win the Super Group of the Dallas Cup’s prestigious international competition. As chronicled on this site, Sabbi’s goal-getting performance with the U20s has been one of the highlights for the U.S., and his flip celebration game is strong.

Sabbi is committed to Akron for 2016 and has largely stayed below professional radars for now, but there’s no telling whether that changes in the coming months. For now, he remains one of the top amateur American boys players in the country.

If Pugh has any serious challenger to this title in 2016 - and make no mistake, frontrunners don’t get much stronger than Pugh at this point - Sanchez has to be as close as anyone. Pugh of course made mondo headlines earlier this year by making a USWNT camp, then making the field, and then scoring a goal. Since then, she’s been the hottest thing in women’s soccer in the U.S.

Sanchez, though, might have something to say about that.

Just weeks after Sanchez ripped through CONCACAF with a dizzying array of golazos for the title-winning U17 WNT, she earned a call-up to a full USWNT camp this week. And here’s another note: she was younger than Pugh was when she earned it. In fact, she just turned 17 a week before the call-up, meaning she was almost a 16-year-old in a national team camp. Finding precedent for that kind of run up the national team ladder is tough. Going from U17 to that in a matter of weeks? Hard to fathom.

But Sanchez has earned it. She’s a unique talent and has the versatile ability to slot in either up top as a striker or, as she has more recently, out wide as a lung-burning winger dancing through tackles. It’s that second skill set that makes her more marketable as a national team player, as she can lean on those skills in a position that doesn’t exactly have a ton of depth.

The other scary thing for college soccer fans outside Westwood: Sanchez is committed to UCLA for 2017. That means, should Pugh stick around for at least her sophomore year, Sanchez and Pugh will be arrayed in the same attack. Terrifying stuff.