Comments
Dallas, TX - The Colorado Rush are Champions of the first ever Dallas International Girls Cup (U18 age group) behind two great goals from Bri Campos and a fantastic game winner by center back, turned goal scorer, Sara Feder. After conceding the first goal of the game to Eclipse Select of Illinois, Campos answered with a long distance goal and then again minutes later with a composed finish after making a wonderful run and receiving a blind slip pass from Lindsey Horan. The teams went into halftime tied at 2-2 after the Rush Girls gave up a late first half corner. Rush played quality soccer throughout the match and with about 20 minutes remaining Feder picked up a high ball at the top of the box, faked the shot while cutting it underneath her and hit a rocket to the near post! The Girls saw the game out like young pros and earned the title of champions. 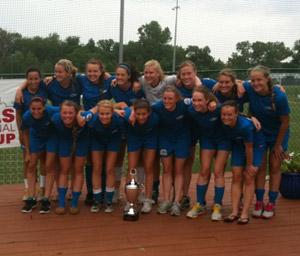 Colorado Rush girls after their victory.
The team, coached by Erik Bushey, was comprised of players from the U16 and U17 Colorado Rush Nike teams and one player from the New Mexico Rush U17 Nike team.