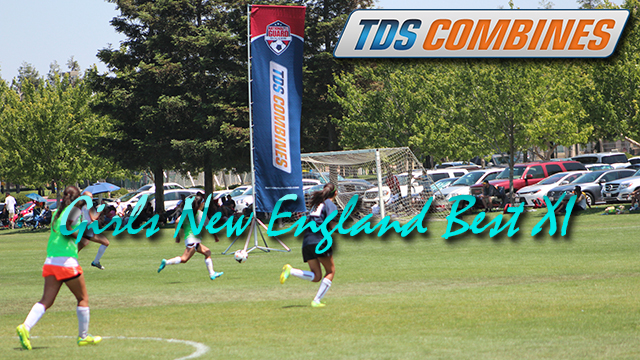 The TDS combine series visited the north East Coast on June 21, hosting its first New England combine.  With coaches from top Division I, Division II, and NAIA programs in attendance, the Combine was a success for both the players and scouts.

College coaches and TDS staff were impressed with the level of talent on display with players from Massachusetts, Rhode Island, Connecticut, Maine and Vermont making the short trip to New Hampshire for the event.

From the talent on the field on the day, TDS have put together the New England Girls Best XI presented by National Guard.

Interested in getting on a Best XI list for a TopDrawerSoccer Combine? Check out how you can get seen at any of our 6 remaining Combines in 2014 here.

Amanda Fay – Goalkeeper – FC Stars of Mass – 2017 – Fay is one of our highest scoring goalkeepers on evaluations to date to attend a combine. Her technique, speed, decision making and all round consistency in these areas make her a solid keeper. With her attributes she should be playing D1 college soccer.

Kelsey Gilbert – Defender – Boston Breakers – 2016 – Gilbert is physically powerful and fast. It is not just her physical attributes that help her stand out as a high level player but also her ability technically and her decision making under pressure. She likes to break out of the back and has the ability to dribble at people.

Sonia Sousa – Defender – Prospect Soccer – 2016 – Sousa had a good solid defensive display and managed to really showcase her tactical understanding of the game. Great 1v1 and when beaten (which was very rarely) she demonstrated fantastic recovery speed. Her physical attributes and competitive nature make her a great defender.

Hayley Gilmore – Defender – Prospect Soccer – 2017 – Gilmore is a modern day defender – smart, reads the play well and rarely had to use her body to make a tackle. She stepped at the right moments to win the ball, and had the confidence to play out of the back. Gilmore also isn’t shy to taking her space on the dribble.

Ilana Albert – Defender – Alleycab – 2017 – Described as “one of the best players at the combine” by one D1 coach, Albert has a very bright future ahead of her. Playing both left and right back she showed maturity by communicating well with the back line, and having a good understanding of shape. A player that likes to break out from the back at every moment she gets, she brings an excitement to the game with her high speed play down the flanks. Fast, versatile, strong and has fantastic movement off the ball she is a dream full back.

Kelsie Cummings – Midfield - FC Stars of Mass – 2017 – Cummings is an attacking midfielder/forward who is extremely comfortable on the ball. Smart, always alert and with a fast speed of play she can run at players and has the ability to play killer passes.

Diana Bruggeman – Midfield – FC stars of Mass – 2017 – Bruggeman is a tough tackling midfielder, who has the ability to burst through the midfield at the right moments and play through balls. She brought an edge and energy to the midfield whenever she was present and rarely gave up possession.

Gwynith Godin – Midfield – Scorpions SC – 2017 – Godin was described by one of the best Division II programs in the country’s head coach as a “great prospect.” An old-fashioned style central midfielder she floated around the middle third, never dropping too deep or getting too high. She showed herself to be the “Claude Makelele” of the day, picking up loose balls and linking up play with simple passes.

Sara Dasilva – Midfield – Connecticut FC – 2017 – Da Silva is a player who can be effective as an attack central midfielder or in the number 10 role. She has a solid technical foundation which mixed with her athleticism leaves her a fantastic prospect for the future. She showed confidence on the ball dribbling into space and taking players on, distributing to the forwards and wingers well and getting shots off from in and around the box. Da Silva has maturity beyond her years.

Gabrielle Brummett – Forward – FC Stars of Mass – 2017 – Brummet was the star of the day. Having just come off the back of a US youth national team camp, coaches already knew that she may be one to watch. Like her best 11 counterpart Amanda Fay, Brummet scored one of the highest scores for a forward at any combine to date. Quick and powerful she showed that she can score and create chances from anything. There were moments in the game when she didn’t have much service into her, and we saw her chasing down the defense to force mistakes to create chances and even dropped deeper to find passes through to her strike partner. She even managed to get a good goal in the first game from dropping deep.

Alexandra Schafer – Forward – Scorpions SC – 2016 – Schafer is a fast forward especially with the ball at her feet. She has the ability to get out wide and get some good crosses in, and found herself pushing on the last defender for through balls at moments in the games. Always alert and sniffing for chances, she scored a cracker from outside the box in the second game of the day.