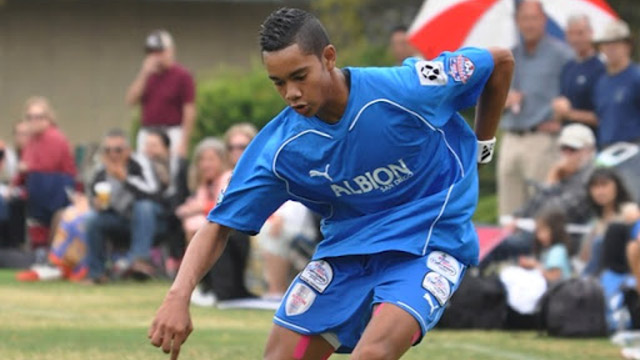 Every program needs a blue chip forward to lean on in the close games. The special talent that team depends on to separate himself from the opposition in the tightest of games and deliver something special.

Last week, Cal Poly received some good news when they landed a player of that caliber.

Ariel Lassiter (Albion SC) put the recruiting chase to an end and gave his word to head coach Paul Holocher to join the Cal Poly Mustangs 2013 class of recruits.

Lassiter, the son of MLS and U.S. Men’s National Team great Roy Lassiter, has been a goal-scoring savant at the elite club level with Albion SC (San Diego, California). He was the U16 Golden Boot winner at the 2011 US Youth Soccer National Championships. 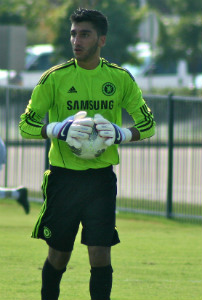 The forward cited the attractive blend of soccer from the Central Coast program that sold him on heading to San Luis Obispo.

The technical, fast paced play of the Mustangs is similar to the way Albion SC plays, which has led the Southern California to many tournament titles over the years.

Lassiter also said that it was the coaching staff that made his decision pretty easy on where he was going to play.

“They are really player’s coaches there,” he said. “Plus the big crowds at the games just make an amazing atmosphere.”

Lassiter joins Joseph Bolous and Kaba Alkebuian in the 2013 class for Cal Poly.

Whether it is off the bench or in the starting lineup, the striker with a great pedigree is expected to make an immediate impact at the next level, and he is well aware of it.

Lassiter said he has turned his focus to preparing for the next level, now

The streaky striker will quickly be putting defenders on the West Coast on notice with his arrival in the green and gold next fall.

A shot-stopper for Carlos Somoano’s CASL Chelsea U18 side, Bardia Asefnia’s near-term future is sorted after he made a verbal commitment to play soccer at Drexel for 2013.

“I am planning to study Pre-Med. Drexel University has a very great reputation for academics and sports both of which are very important to me,” he told TopDrawerSoccer.com. “The school is also located in the heart of downtown Philadelphia and I enjoyed the urban atmosphere of the campus.”

Asefnia brings a very impressive soccer resumed to the Dragons. He’s played for CASL since he was 9 years old, and has competed on various ODP teams for several years. He’s also had the opportunity to travel abroad and train with Chelsea’s Academy in London.

He’s admired the Drexel soccer program for awhile as well.

“Drexel University has been one of my top choices for college soccer,” Asefnia said. “I have couple of older friends on Drexel's team who have high praise for the soccer program and the school. I also felt comfortable when I visited the university and joined some classes and could envision myself on campus.

“The coaching staff of Drexel is very professional,” he continued. “Coach Doug Hess has a huge reputation and respect among other division I college coaches and club officials. While on my visit, I stayed with the team and got to know them up close. I'm excited to be apart of such a great team next year.”

The shot stopper also paid tribute to the CASL coaching staff that helped him get this far, specifically coaches Rusty Scarborough, John Bradford and Carlos Somoano.

Another goalkeeper, this one from the Midwest, Bryan Seefeld found everything he was looking for when he came across what Saint Louis had to offer.

“I decided to commit to SLU because it just felt like the right fit for me in all the aspects of a university that I laid out before I even started looking at colleges,” he told TopDrawerSoccer.com. “The soccer program has a long standing legacy of being an amazing soccer school, and also having great academics on top of that. I knew I wanted to play soccer at a high level, and be able to get a great education at the same time, and SLU seemed to fit both of those criteria very well.”

Getting to play for head coach Mike McGinty and the rest of his staff were huge highlights for Seefeld as well.

“Coach McGinty and his coaching staff have done an amazing job since they came to the program,” he said. “The competitiveness and drive that they bring to the program is the kind of coaching that can bring a team to a national championship.”

He also reserved special praise for Franco Carotenuto, who coaches the team’s netminders.

“The goalkeeping coach is probably one of the best coaches in the nation,” Seefeld said. “I can see myself getting exceedingly better very quickly with him as a coach.”