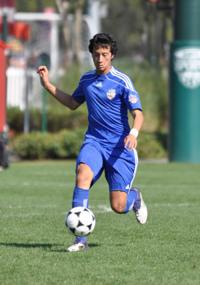 An impressive recruiting crop continues for the Wolfpack, as Mattias Fracchia, another player from the IMG Academy 150, joined its 2014 class recently.

“I was really impressed with the way the coaching staff worked with my family and me,” Fracchia told TopDrawerSoccer.com. “I loved everything about the school when I went on an unofficial visit, including that school offers exactly what I want to study. NC State stood out among other schools for me because of the way the coaching staff is working.”

Of course, from the way Fracchia describes everything else about the team, it didn’t take much to persuade him.

“The soccer program is incredible,” he said. “The facilities are unbelievable and everything is extremely organized. Seeing the way the coaching staff is working, I have no doubt that the soccer team will improve greatly. Adding to all that, the players that are being recruited into the school are very high-level players and I am extremely excited to have them as teammates.”

Few programs have made as significant strides forward like VCU has in the past few years. And recruits are certainly taking notice, not just of the results, but also the way the team plays.

It’s what drew an in state talent like Cody Sweatte to the Richmond-based school.

“Everything about it felt right,” he told TopDrawerSoccer.com. “When I visited VCU the players and coaches made me feel welcome. I spent a lot of time talking to coach Josh [Tudela]. He shared the same goals that I have when he was a player at Indiana. He really made me feel wanted and showed me all the aspects of why this would help me achieve my goals.“

Style of play was important to the winger, who offers a creative spark to his McLean Youth Soccer DA team from the flank. Head coach Dave Giffard, a former assistant at Akron under Caleb Porter, has brought the possession-oriented style to the program and it caught the attention of the recruit.

“It is hard to find a school like VCU,” Sweatte explained. “It is one of a handful of teams in collegiate soccer that is possession oriented, and likes to keep the ball on the ground and not just play long ball. I like that VCU has players moving on to the next level every year which matches my goal of playing professionally after college. They have some of the top facilities in the nation and there is great backing by the university.”

The leading scorer for Seattle Sounders U16s is heading to enemy territory.

While Kalamar, who has 14 goals in 16 games this season, isn’t signing with the Timbers, he will be in close proximity to the Cascadia rivals after committing to join the Pilots in 2014.

“I chose it because of the academics and the coaching staff that has shown to constantly produce professional talent,” Kalamar told TopDrawerSoccer.com. “Having aspirations to become a professional player, I feel that UP is the perfect environment for me to excel on and off the field.”

A defender who can play anywhere along the back line, Colgate landed a coup with the verbal commitment of Scodari.

A member of the soon-to-be Academy club Olney BGC, Scodari found everything he was looking for at the New York institution.

“I decided to commit to Colgate because deep down inside it seemed like the right fit,” he told TopDrawerSoccer.com. “I wanted to be able to play Division I soccer at a high level while also being able to study at one of the best liberal arts schools in the nation. At the end of the day, the opportunity was just something my family and I couldn't pass up.”

While ‘national power’ and ‘Colgate’ aren’t usually synonymous, Scodari sees signs that could end up changing in the not too distant future, as head coach Erik Ronning has done a good job building a program.

“I really like the staff, the players, and the direction where the program is heading as a whole,” Scodari explained. “Coach Ronning has done an excellent job building the program over the years, and it is still on the rapid incline. Both incoming recruiting classes are filled with many talented players, and the program has a bright future ahead.”

Midfielder Chase Gasper (OBGC Rangers) committed to Virginia for the class of 2014.

Midfielder Jake Areman (Matchfit Academy) committed to Maryland for the class of 2014.

Forward Noah Hutchins (Crew Soccer Academy) committed to Kentucky for the class of 2014.

Defender Wyatt Fabian (Lehigh Valley United) committed to Lafayette for the class of 2014.

Defender Michael Nastu (Met Oval) committed to Stony Brook for the class of 2013.