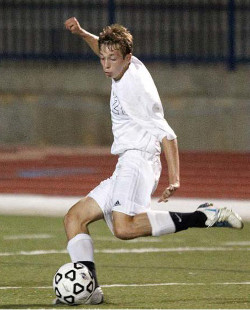 A versatile attacking player, Alex Kowalski found the right fit and recently made the decision to verbally commit to Elon.

“My decision was based on being able to get a quality education, while playing at the highest level,” he wrote TopDrawerSoccer.com in an email. “Elon has a great reputation as an outstanding academic institution. The athletic program strongly emphasizes succeeding both on the field and in the classroom.”

Intending to be a business major, Kowalski also took strong interest in a level of education available to him – and of course, the soccer team factored in as well.

“The Elon Phoenix soccer program has established a competitive tradition in the Southern Conference and nationally,” he said. ”Their possession and tactical style is a great fit for the way I play.

“I have tremendous respect for Coach [Darren] Powell and Coach [Chris] Little and that respect is shared by all of the members of the team that I met during my visits to the school."

When he goes to school in the fall of 2013, it’ll mark the first time since he was about eight years old that Jimmy Fiscus will play for a team other than the Wolves.

The center back is staying in state to continue his education after verbally committing to the Spartans.

“Michigan State best fit the criteria I came up with when I talked with my parents and my coaches,” Fiscus wrote TopDrawerSoccer.com in an email. “This included the academic programs offered, the size of the school, the school's commitment to soccer and academics, but also the interest the school showed me starting with the camp I attended and throughout the entire visit to the campus.”

Staying close to home was on his mind too – or at least not venturing too far away.

“I really wanted to stay within the Midwest so that my parents would be able to continue to see the majority of my games,” he said.

Getting the chance to see the team up close during a visit helped him end up making the decision to commit there.

“I have to say I enjoyed every part of it but when my parents asked me the same question I said I liked the overall atmosphere,” Fiscus said. “The various tours of the facility and campus were great but I also wanted to see the team practice.

“I feel that I got a real look at the team by doing this as well as team chemistry and coaching styles.  But it was the feel of the team that I liked the best, I felt they were close like a family, and this was very appealing.”

A tough, tenacious competitor, Schunk is part of a coveted breed of soccer player – the left-footed defender who likes to go forward from the back.

She recently decided to take her talents to Texas Tech.

“Tech provides the exact atmosphere I was searching for: a competitive, hard-working, quality soccer team and a school which provides the highest level of academics,” Schunk wrote TopDrawerSoccer.com in an email. “Not only that, but I knew going to Tech would be a challenge for me. The team is improving at a fast pace and getting better and better every single year.”

It wasn’t only the rising tide of the soccer program that appealed to her.

“The thing I like most about the school is the school spirit and support,” she said. “Everyone at Tech wants to be there, and everyone wants not just themselves, but the people around them to succeed.”

“My decision to commit to Notre Dame was easy,” Kristin Hayman told TopDrawerSoccer.com. “Because Notre Dame is so strong both on the field and in the classroom, I know I will receive one of the best educations possible and I will have the privilege of playing at the highest level available in college soccer.”

If a player did have a doubt, visiting the South Bend campus is enough to seal the deal.

“When I visited Notre Dame the campus was amazing and the athletic facilities were equally impressive. In addition, the coaching staff was incredible. They were organized and ready to give me all of the information I needed, but most importantly, they were unbelievably welcoming and kind.”

Hayman also considered Fairfield, Marist, and Cornell before giving her verbal to the Fighting Irish earlier this month.

“I am so happy to see my college recruiting process end like this and I am indescribably excited to make the most of the amazing opportunity that I have been given.”