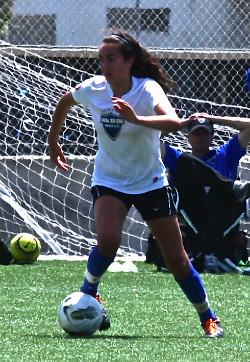 Throughout her college search, Sofia Chambers had a list things she wanted to find in a school. She was looking for a school with a major athletics program, a soccer team that likes to keep it on the ground, a solid pre-med track and eventually decided she wanted to stay in the Pac-12 and on the west coast.

All of those criteria added up and brought her to the program in Eugene.

“I knew very quickly the University of Oregon was the place for me,” Chambers told TopDrawerSoccer.com. “Not only is Oregon the epicenter of college athletics, the campus is stunning, both architecturally and naturally. As well as the facilities are second to none. The support the athletes receive academically is absolutely incredible. Another factor that helped me make my decision were the resources at Oregon's disposal. This aspect is unmatched by any school, period. The workout facilities, Papė Field, Mashofsky Center, the nutritionist, the strength and condition coach, the trainers, etc. The list goes on and on.”

Along with the program meeting her long list of criteria, it was the coaching staff that convinced Chambers that making the commitment to Oregon was the right decision for her.

“[Head coach] Kat [Mertz], Hideki [Nakada], and Christie [Welsh] are just unbelievable,” she said. “They are so positive, energetic, engaging, tough, bright, and dedicated. These coaches eat, live, breathe, and dream of the game, like myself. Coach Mertz and her staff are determined to win a Pac-12 Championship. I believe, if you can win Pac-12 Championship, you have a real chance at winning a National Championship. In becoming a Duck, I have a real chance to be a part of something special from the ground up.”

A 14-year-old playing up with the U16s, going up against players who are bigger, stronger and faster has been an adjustment for Haley Berg.

The Texans midfielder started her college search while in the eighth grade, and recently decided to commit to a school not too far at home in Texas, with a lot of it coming down to a connection with the coaching staff.

“Coach Angela Kelly is a role model for young ladies both on and off the field and played soccer in college at UNC and also for her Canadian National Team,” Berg told TopDrawerSoccer.com. “I know college is in a few years but Coach Kelly spoke to me and emphasized being a strong, confident and proud young lady both on the soccer field, in the classroom and in life.”

Comparing Texas with other top programs like North Carolina, Notre Dame, Texas A&M, Wake Forest, Duke, Colorado, Houston and Tennessee – to name a few – Berg seemed to think that the Austin-based school offered her what she was looking for on and off the field.

“In terms of the soccer program, the environment was exciting, the coaches and players are very friendly and the fans came out and supported the program,” she said. “It felt comfortable and felt like an environment I would want to be a part of when I graduate high school in both academics and athletics.”

Defender Bridget Callahan (Weston FC) committed to UCF for the class of 2014.

Midfielder Natalie Hein (Real So Cal) committed to Montana for the class of 2014.