It’s long been understood how much of a draw ACC soccer is for recruits, and it’s a big reason that Nicole Molen is making the long trek from Southern California to South Florida for school. 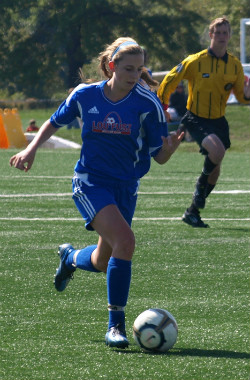 “Miami was just overall the perfect fit for me,” Molen told TopDrawerSoccer.com. “From the great academics to the very competitive conference in the ACC, Miami had everything I was looking for in a school. The combination of athletics and academics is really what prompted me to choose Miami.”

With the opportunity to get that high-level exposure, Molen looks forward to becoming a better player in that competitive environment.

“Playing with and against some of the top collegiate players in the nation is something that means a lot to me,” she said. “Also, the philosophy of all the coaches and the players at Miami is a commitment to get better everyday. When I'm there, I know for sure I will become a better player and be able to improve on my skills, which is very important to me.”

Molen was also intrigued by what she saw in the classroom, and knows that she’ll come away with a top-rate education.

“Miami has a very small class size and I feel like this is important if you want to be successful as a student. Also, they have the majors I'm interested in studying: nursing, pharmacology.”

A quick and agile goal scorer, Kate Sanfilippo’s decision to commit to Northern Illinois came from a very specific yet simple reason.

She also noticed that the soccer team was quite close, with a lot of them living together, but there were also highlights of the campus and school that stood out to her.

“I liked the freshman dorms and how all the athletes were in the same building,” she said. “Also, I like how there are many areas of studies and professors that are willing to help the students.”

Midfielder Gianna Bustamante (PDA) committed to Dartmouth for the class of 2015.

Defender McKenna Sullivan (Heat FC) committed to Brown for the class of 2016.

Defender Megan Ross (Michigan FC) committed to Western Michigan for the class of 2013.

Forward Jordan Cossey (FC Stars of Massachusetts) committed to Mississippi State for the class of 2014.

Defender Sophie Fuller (Lamorinda United) committed to Westmont for the class of 2013.

Midfielder Morgan Murphy (Dallas Texans) committed to Texas for the class of 2014.