This is part two of an article on the MLS Home Grown rule. Please read part one: HERE.

One of the biggest holes in the idea of the player identification lists is what happens when a player moves from one academy to another, which is currently transpiring between RSL and Chivas USA in the case of U.S. U18 forward Ben Spencer.

Spencer is from Albuquerque, New Mexico, and spent last year at RSL-AZ after being scouted at U.S. U15 national team camp by former RSL-AZ residency directors Greg Vanney and Mike Munoz.

After a season with RSL-AZ, Spencer followed Vanney and Munoz to Chivas USA, where he trains with the first team and starts for the Chivas USA U18 team.

“I would simply say the rights to Ben Spencer are in dispute,” said RSL General Manager Garth Lagerwey. 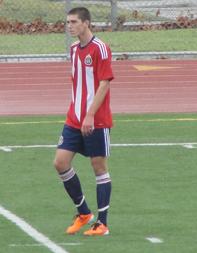 Ben Spencer
Explaining how Spencer is eligible for a Los Angeles MLS academy despite being from New Mexico is another part of the rules that are not public.

“We have a limited number of out of territory exceptions,” said Lagerwey. “Every MLS team gets at least one. Teams in smaller markets get a couple more.”

Delving deeper into the financial logistics of the contract, the Home Grown deals are set aside from the salary cap restrictions in a manner similar to Generation adidas contracts.

“The Home Grown roster has a budget attached to it, which is pretty significant, with the idea that there is a finite amount of money reserved for signing Home Grown players,” said Lagerwey, who said the budget was in the six figures.

“These Home Grown players don’t count on your cap if you keep them within, what is effectively, a Home Grown player salary budget. So in that sense, it operates very much like a Generation adidas program on a team-by-team basis.”

Wheeler added that the role of the Home Grown Player contract is quickly surpassing the Generation adidas deal, in terms of the best option for young players.

“The league doesn’t care how a kid gets in as long as he signs with MLS,” Wheeler added.

Lagerway called it a collective effort in the advancement of the rule to ensure the best players in the country ended up in MLS.

“This is some pretty normal growing pains, as we try to figure out what the best system is not just for MLS, but also U.S. Soccer,” said Lagerwey. “For the youth stuff, we are all in this together. It does us no good to develop players who can only play in MLS but not the national team. It doesn’t do us any good if we aren’t able to get all the best players in the country to play for MLS Academy teams.”

“Those are things that everybody agrees on and are desirable. There is a learning process and a development process that is going on and hopefully once the rules get settled, then I think all of the stuff will be a lot clearer.”

Till then, MLS continues to dive further into the rabbit hole to settle the fragile framework of the current Home Grown rules.
Related: Players To Watch,
Headlines
Club Rankings HQ
View all rankings >>