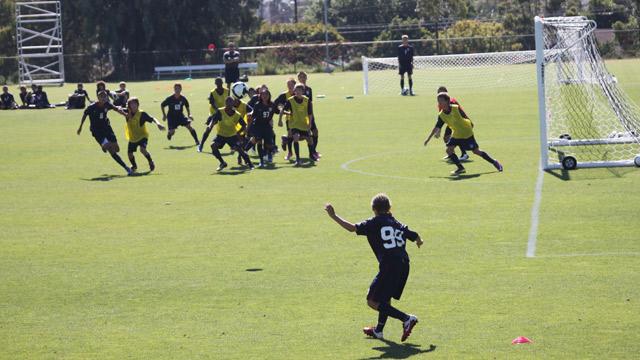 The training wheels finally came off.

Through four days of the U.S. U14 Boys National Team ID Camp, the coaching staff had taken a minimalist approach while guiding the youngsters through trainings and smaller scrimmages.

But on Thursday, the kids were cut loose – kind of.  The games got bigger and the plot a little thicker. The U14s battled in a set of 11v11 and 10v10 matches that allowed players the room to really showcase their abilities. 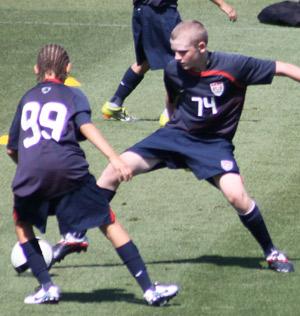 From the early goings, there were some great connections from team blue attackers Pullsic and Deihnia as they pushed the squad forward and put pressure on keeper Romero.
Pullsic is a small but industrious player who showed off his ability to distribute while Deihnia is a lightning quick play-maker who can be explosive.

Romero displayed great hands and reaction on several saves before the blue team ultimately broke through for the scrimmage’s only goal – a well placed long-range strike from Hall, who stopped on a dime and put the ball in the upper corner.

Players who showed well from the yellow team included midfielder Calvillo, who was extremely poised and productive with the ball. The Real So Cal standout never looked rushed with the ball at his feet and maneuvered well in tight space.

Teixeira is a dangerous striker who has performed well all week and continued to be a factor in front of the net.

Defender Westra, from Snohomish United in Washington State, was a strong presence on the outside. He has good upper body strength that allows him to win a lot of battles with his less physically imposing peers.

In a second intrasquad match, Nathan de la Hoya starred as he led his side to a 1-0 win. De la Hoya is a striker with great pace and vision that endeared him to his teammates. After serving several great passes that his teammates failed to put away, he finally connected with Alex Soto on a ball in front of the net that was so precise Soto could have finished it had he been standing perfectly still.

Ethan Lotenero, who was a part of the winning team, was another one of the standouts. A forward from CZ Elite in California, Lotenero was very smooth on the ball as he has been throughout camp.

Highlights from other matches included a nice goal John Shaw, who created in the middle of the field before blasting a shot past the keeper.

His match ended in a 1-1 tie after Terrell Lowe earned and converted a penalty kick by being taken down in the box by goalkeeper Gianfranco Barone.