COLUMBUS, OHIO - Crew Soccer Academy posted a loud advertisement for the quality of the USSF Development Academy here Monday, defeating the U17 Men’s National Team 2-1 in an exhibition played at Ohio State University.

Richie Williams’ starting 11 did not include many of the regulars from the U17s, but Crew put in a strong effort in front of a few hundred supporters on the night.

Rylee Woods and Alex Bumpus were the goalscorers for Crew, while Ahinga Selemani pulled back a late tally for the U.S. 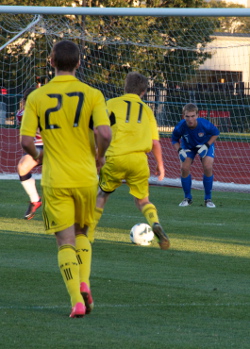 Crew Soccer Academy vs. U17 MNT

“You saw a lot of people come out and see a good game and a team that can play very well. Any time you can get a good result against a national team should tell you something,” he said. “The Bradenton program is very strong but this shows we’re taking player development very seriously as well.”

“This shows we can play against any team in the country,” he said.

U17 MNT coach Richie Williams said the match, along with a 3-2 win Saturday in St. Louis vs. St. Louis Scott Gallagher, will serve as help to his team in progressing through the cycle.

“That’s why we schedule these games, to get them good matches in different environments,” Williams said. “We are able to look at a lot of players We’ve just been back together for a couple of weeks and we have 11 new guys out of our 31. This will serve a good purpose, even though we would still like to get a result.”

Look for a more detailed article with coach and player quotes later in the week about the Residency vs. Academy question.

On Monday, Crew defender Rylee Woods scored the opening goal, walking in from the left, having a shot blocked and then corralling the rebound before firing home. He nearly scored again a minute later after a good cross from Brady Blackwell.

Andrew McKelvey had a chance after some good work on the right from Nathan Kohl, but U.S. goalkeeper Jefferson Caldwell made a save from close range.

In the 36th minute, the U.S. created their best chance of the half when Ahinga Selemani made a good run down the left and precisely cut a pass back for Alan Winn, but the Solar product’s shot went over the bar from 10 yards out. A few minutes later, left back Peter Schropp led Rubio Rubin long down the left, but his cross found nobody home.

Early in the second half, the Crew nearly doubled their advantage with substitute William Bayemi being denied form close range by the legs of Caldwell. The reprieve was temporary as in the 62nd minute as Alex Bumpus placed a header off a Noah Hutchins cross into the lower right-hand corner of the net for a 2-0 lead.

The U.S. got on the board in the 72nd minute when Ahinga Selemani was given too much room on the right. He used his speed to move into space and then curled a shot around the goalkeeper to make the score 2-1.

The U.S. put some more pressure on but in the end it was the Crew who had the better chances to score an additional goal and they deserved their 2-1 victory.