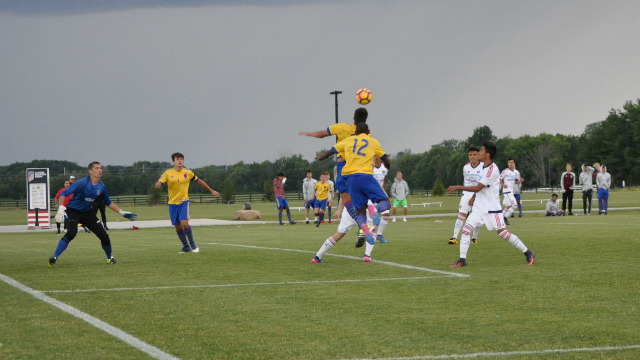 Two more weekends are left in the 2016-17 Development Academy season, and on Friday, the U18 playoff field will be cut down to four.

Rematches and rivalries abound in the four upcoming U18 quarterfinal matches that will be hosted at different locations around the country.

U18 Quarterfinals (July 7, all times EST)

Overview: After sweeping through Group G thanks to a 2-1 win on the final day of group play, Orlando City will be back home at Orlando City Stadium for its U18 quarterfinal against the Colorado Rapids. The Rapids roared into first place in Group F with its dominant 5-0 victory against the Fire on the last day of play in Indiana, also finishing with a perfect 3-0 record.

Players to Watch: Midfielder David Loera was one of the best players spotted in the group games. The attacking midfielder can beat players in a variety of ways, whether off the dribble or his passing ability. Orlando is far from a one-man show, of course. Despite forward Landen Haig absent with an ACL injury, Raul Aguilera packs punch in the midfield, and goalkeeper Justin Bauer’s saves in a 2-1 win against Indiana Fire Academy proved critical. Colorado doesn’t lack firepower, either. Stanford-bound forward Rhys De Sota has a huge frame and is a nuisance at this age group, and one of his front-running teammates Enoch Mushagalusa scored three goals and had two assists in the final group game against the Fire. Defender Bailey Heller is likely suspended after getting sent off against Chicago, so this matchup could produce a high-scoring affair.

Overview: One of these two under-the-radar sides will progress to the semifinals after impressing in Indiana. Real So Cal heads to Houston Baptist for this matchup after defeating Lonestar SC 2-0 in a winner-take-all group finale. Host side Texans SC Houston was in great form at Westfield, sweeping Group D with wins against Montreal, Sockers FC and Sacramento.

Players to Watch: Real So Cal is teeming with Division I recruits that have been difference-makers at the club level. Jason Manning and Jake Kemhadjian (Portland) were impressive in the final third, while Carson Vom Steeg (Stanford) and Freddie Kleemann (Washington) led the team’s stout defensive. That quartet is just the tip of the iceberg will need to slow down a Texans attack that found the back of the net nine times in Indiana. U.S. U18 MNT midfielder Christian Cappis was one of the best players on the field, forming a lethal combination in the final third with Alex Bruce. Wreaking havoc against a stout Real So Cal back line will be a tall task, but if the Texans repeat their form from Westfield, it’s certainly possible.

Overview: The heated crosstown rivalry pays a visit to the Starfire Sports Complex, as the Sounders host Seattle counterparts Crossfire Premier. The Sounders took two of three regular season matches between the two sides, and will riding high after progressing from a tough Group C, getting past FC Dallas and New York Red Bulls. Crossfire Premier won Group A, boosted by opening the group games with a 5-2 win against New England, and closing it out with a 2-1 victory over Bethesda SC.

Players to Watch: Crossfire won’t be daunted by the challenge of facing its rivals. Packed with Division I talent, the likes of Charlie Ostrem, Hal Uderitz, Quinn Fahling and Bailey Letherman will need to be on song in order to spring the upset. The presence of Sounders 2 in the USL has allowed the team to promote some of its top U18 talent to get minutes with a pro side, and those benefits were on display in Indiana. Forward Shandon Hopeau, who signed a pro deal with S2 earlier this season, is a lethal striker that found the back of the net twice in the final game against Beachside SC in the final decisive group match. Goalkeeper Trey Muse, recently committed to Indiana, backstopped the team at Grand Park and has also had reps with S2.

Overview: The less heralded of the two LA teams in the playoffs, the Galaxy nonetheless rode a stout defense and timely scoring to the top of Group B, besting Atlanta United and Sporting KC. RSL, which will host the Galaxy in the final RSL match at Grande, also finished its week in Indiana sporting a 2-0-1 record. The two teams played three times during the regular season, with Real Salt Lake winning two of three, and drawing the other.

Players to Watch: The makeup of LA Galaxy’s traveling roster will be intriguing. With the U16 side failing to progress, it could open to door to include players like Jake Arteaga, Efrain Alvarez and Ulysses Llanez to provide some depth on the bench. Availability of the likes of Ian Lonergan and Ethan Zubak for the U18s, then depends on whether or not they end up playing for LA Galaxy II. Longeran in particular was excellent in central defense, while Patrick Murphy’s energy up front helped both the team’s attack and defense, and Oscar Penate supplied a couple of clashes finishes. RSL lacks the same kind of individual talent that it’s had on past U18 teams, though the group as a whole produces beyond the sum of its parts. U.S. U17 MNT midfielder Taylor Booth joined up for the team’s group games, and his presence can make a big difference going forward. UCLA signees Eric and Milan Iloski have been a hit since joining RSL earlier this year, and UNLV recruit Marco Gonzalez scored twice in the three games in Indiana.