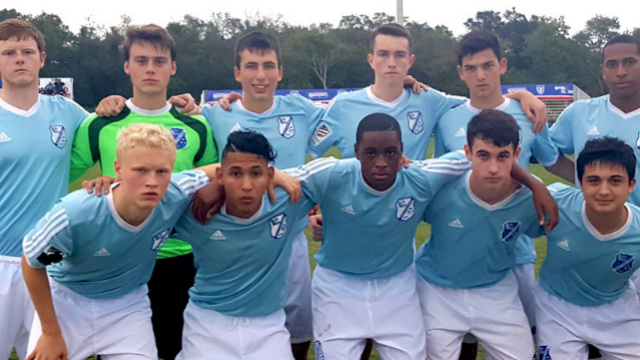 The latest edition of the Development Academy postseason kicks off next week on June 22, returning to Frisco, Texas, after spending two years in Indiana.

There are plenty of familiar teams in the hunt for silverware. The Under-18 age group is ripe with players going through the final days of their club career as well, before preparing to begin their college careers later this fall or embarking on pro careers.

Below is a group-by-group overview of the 32 teams set to do battle in Texas.

Overview:
Vancouver is always a team to watch in the Development Academy postseason, as their teams are typically tough to break down and hard to beat. This U18 team has just one loss on the season -- to go with 11 draws -- while Gloire Amanda and Terran Campbell bring the offense, combining for 30 goals this year. Lining up in the group as Vancouver’s lone MLS Academy foe, D.C. United, hasn’t lost in seven games. Jose Carranza has continued to impress for D.C., and could be joined in Texas by recently signed U17 MNT player Chris Durkin. One of the most storied youth clubs in the country, Vardar emerges out of the Mid-America Division as a wildcard team. Recent Villanova commit Vincent Manzo led the team with 13 goals, and he’ll be required to provide the goals. The Chargers should provide an interesting package, as they showed the ability to put the ball in the back of the net, though struggled at times defensively. They’ll have the second lowest goal differential (+8) of the teams in Texas.

Overview:
Houston Dynamo earned a seed in the postseason after rattling off 18 wins in the challenging Frontier Division. The MLS Academy is a bit of a mystery piece though. Star players Juan Flores and Christian Lucatero appear to have moved onto the professional realm, which makes their availability for this event seem unlikely. However, Dynamo has still been a quality side without those two. UNC Wilmington commit Mason Schuster has been the engine of the midfield this season for the Dynamo with eight goals in his 24 appearances. While Dynamo looks solid on paper, this group still is wide open because Real Salt Lake AZ, NC Fusion, and Seattle Sounders FC all have the potential to snag the top spot in this group. RSL AZ was the finalist in this age group last season. This year’s year is vastly different but Sebastian Des Pres has emerged as a breakout star of the Academy for this campaign. Fusion brings in a strong side from top to bottom with goalkeeper Alec Smir having the most potential to be the star of the week. Sounders have a stacked squad, but a consistent finisher has lacked from the group.

Overview:
The New York Red Bulls are once again in the mix for the Development Academy National Championship. The core of this team was part of the group that finished as runner up in the U16 age group last year. Red Bulls’ strength comes in the pressure that the group puts on the opposing defense. There is no hidden secret that New York will press and force the opposition into uncomfortable spots. The way to success is passing through the lines and cutting out NY’s immediate pressure. Sockers will be looking for midfielder Sean Lynch to be the catalyst at orchestrating the game for the Illinois side. U.S. U19 Men’s National Team defender Nabilai Kibunguchy will be under the microscope for Sacramento Republic, which qualified for the playoffs in its first season in the Academy. Pateadores are a bit of a wildcard, as they emerged from the tough Southwest Division. Eder Oliva led the way with 16 goals this season for the SoCal squad.

This group features two of the best non-MLS Academies in the country, as both PDA and Chicago Magic have a positive track record of churning out quality college and professional players. This U18 Magic group is no different. Emmanuel Sabbi is the spearhead at the front, as the U.S. youth national team player has scored 17 goals from 18 games. There’s always the chance he is unavailable for the competition, but when he’s joined by Luka Prpa and Anselm Pasquina on the field, the Magic are dangerous and tough to stop. PDA features a dangerous weapon in the final third in the form of Isaiah Young, while James Murphy bosses the midfield. U.S. U17 MNT goalkeeper Kevin Silva is rostered though his availability is uncertain at this point. Unbeaten in their last six, Montreal is the unexpected package among this group, and went on a deep run last year. Canadian youth national team players Badreddine Boulajoul, James Pantemis and Jimmy-Shammar Sanon bolster the roster and bring valuable experience to the fold. Arsenal FC grabbed the final Wild Card spot in the playoff race, though that shouldn’t diminish their chances coming from the tough Southwest Division. Davis Moreno-Jaime led the team in goals scored this season and will need to play a big role to give the SoCal side a chance.

Given the academy’s pedigree and history, it’s safe to consider any FC Dallas team a favorite to win its group. Even more so when considering there is no travel involved, and a chunk of the U18s won the U16 title last year. However, the draw was not kind to the hosts. Facing both LA Galaxy, Orlando City and Shattuck, it’s hard to pin down what might tip the balance in this group. There’s a lot of quality to go around on an individual level, as Nathaniel Adamolekun (Orlando City), Luke Haakenson (Shattuck), Ethan Zubak (LA) and Weston McKinnie (FC Dallas) are all plenty capable of making things happen on the field and making the difference.

Overview: Georgia United barely squeaked into the playoffs, but they are probably the favorite from this group. The future Atlanta United Academy has a stacked roster that is looking to make one last push for the title. New Atlanta United signing Andrew Carleton headlines the squad. The talented winger is a tricky mark for any defender in the Academy. Carleton spent the vast majority of the season with the U17 Men’s National Team, but he did register five goals in 12 games. The top seed in this group is Crew SC Academy Wolves, which is a team built on quality pieces. Marc Ybarra and Suniel Veerakone are the midfielders who run the ship and need to control each of the games in this group in order for the Wolves to enjoy success in Frisco. Texas Rush relies on the talent of two forwards to help carry the load. Brandon Guhl and Jorge Zamarron have combined to score 34 goals this season. They will be tough to stop in Group F. Nomads started the season strong, but closed out the campaign with only one win in the last four games.

Overview:
After finishing one point behind New York Red Bulls in the Atlantic Division, the Union have plenty of reasons to be confident heading to Frisco. An impressive defense anchored that accomplishment, and it’ll be what they lean on against Kendall SC, Chicago and Beachside. The Fire are technically defending champions of this age group, though a large number of last year’s team has moved on to college and won't appear this summer. Of the quartet of teams, Kendall brings the most firepower after scoring 90 times during the 2015-16 season, and will look to hit the ground running.

Overview:
One of the more intriguing groups of the playoffs, the best offensive team statistically (CASL) matches up against the best U18 DA defense (BW Gottschee). Toss in two solid and steady MLS Academies with decent talent, and each of these Group H matches should provide solid viewing. Gottschee’s record has been particularly impressive this season, winning 24 of 26 matches and posting 17 shutouts along that stretch. Princeton recruit Sean McGowan led the team with 15 goals, though they don’t need much in order to secure progression.