There is a reason the U.S. Soccer headquarters are in Chicago. It is a hotbed for soccer at every level especially in the youth game.

In the USSF’s Development Academy, there are three clubs from the Windy City: Sockers FC, Chicago Magic PSG, and Chicago Fire.

The U18s from all three have started the 2012-13 Academy season with perfect records with the Magic leading the way at 4-0-0.

On Saturday, the rights to the city, in a sense, are on the line when Fire and Sockers meet for the first time this season.

Through the first part of the season, Fire U18 leads the nation in goals per game with 13 in three games. Striker Jeffrey Farina has been the key for the Fire attack with seven goals. Center back Cody Witkowski has helped the Fire defense hold the opposition to only one goal on the year.

Sockers FC’s defense has been equally as impressive this season with only a single goal let in from its three games, but the Fire attack will definitely test the resolve of that back line.

Saturday’s showdown will be noteworthy, but it is not the only game on the docket in Chicago for the weekend. Chicago Magic PSG hosts Indiana Fire Academy at College of Dupage on Saturday. Magic U18 is the only 4-0-0 team in the country at this stage of the season, but Indiana Fire is no pushover. Star midfielder Cameron Lindley is expected to make his Academy debut this weekend.

Southern California clubs Pateadores and Strikers head up the coast for a pair of games against Santa Cruz Breakers and De Anza Force.

Jason Romero continues to lead the way for the Force U18 squad with four of the team’s five goals this season.

San Diego Surf and Nomads SC also make the trek north this weekend with games against San Jose Earthquakes and Cal Odyssey.  Earthquakes kicked off their season last week with a pair of victories over the Odyssey in the two age groups by a combined score of 9-0.

Continuing with the theme for Southern California teams, Arsenal and Real So Cal hit the air for games against Seattle Sounders and Portland Timbers. The weekend fixtures will be the first home games of the season for the Timbers. 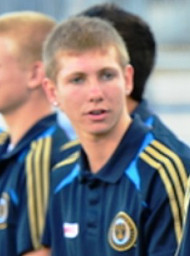 The top two teams in the U18 Atlantic Division face off on Sunday in Manheim, Pennsylvania when Players Development Academy visits PA Classics. Both teams are perfect on the year heading into the match. Classics U18 is led by striker Joseph Julius who has five goals in three games.

PDA U18 has a deep roster, which includes Indiana commit and Union U17 center back Billy McConnell.

In the younger age, the Classics are trying to prevent PDA from pick up its first win of the season on Sunday. Classics have a talented roster, but the star of the show is youngster Christian Pulisic who is playing up a few ages with this team. Pulisic is a member of the U.S. U15 Boys National Team.

D.C. United hosts Richmond Kickers on Sunday, which should be an entertaining game in the U18 age group. The Kickers are undefeated on the year with a 2-0-1 record. Finnlay Wyatt and Tyler Slayton have combined to score six of the team’s seven goals this year.

In the Northeast Division, it is the Battle of New York on Sunday. Albertson travels to New Jersey to take on New York Red Bulls at Montclair State University. Both clubs are undefeated in both the U16 and U18 age group. The matchup in the young age group is even more noteworthy with neither team letting in a goal so far this season.

Orlando City hosts its second ever Academy game this weekend with Charlotte Soccer Club heading down to Florida. The new club faired well in the younger age group with a 3-0 win over North Meck to start the season in September.

The two Texas MLS youth academies play each other in Houston on Saturday. Both clubs are undefeated on the year. Carlos Ibarra has been the main scoring threat for the Dynamo U18 this season with three goals to his name in only one start. FC Dallas U18 relied on a balanced attack with five different scorers in its lone fixture of the season.

In the Mid-America division, the two Michigan clubs are scheduled to meet on Saturday. At the younger age level, Crew Soccer Academy Wolves and Vardar SC Freiburg are the top two teams at this point of the year.