There wasn’t much to separate Portland Timbers and Real Salt Lake’s respective academies over the weekend. RSL’s U18s got the better of Portland’s in what was a tight affair – Syracuse-bound attacker Benji Lopez bagged the winner in a 1-0 win. A point was shared in the U16 match, a 1-1 result, with Brooks Lennon canceling out Jesse Garcia-Aguilar’s first half goal for the Timbers.

It was a glut of goals for LA Galaxy’s U18s, marching past Strikers FC 7-0. Justin Dhillon scored a hat trick, and Oscar Sorto added a brace, while Jack McBean and Paul Arriola rounded out the scoring. The Galaxy’s U16s made it two wins in two games with a 3-2 win. 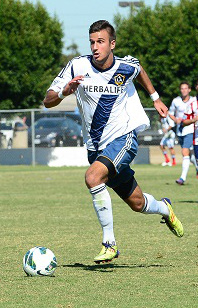 Jesus Garcia’s two goals played a significant role in the San Jose Earthquakes’ U18s win over Santa Cruz Breakers. Garcia opened the scoring in the 11th minute, before the Breakers equalized in the 30th minute with Conor Corboy’s tally. Garcia bagged what would ultimately be the winner after the half. San Jose’s U16s were also victorious by a 1-0 score line.

The weekend proved eventful for the Seattle Sounders Academy down in the northern California region. Seattle’s U18s shared a point with San Juan Soccer Club in a 2-2 draw, although the U16s managed to pick up all three against San Juan in a 3-1 win.

Arsenal FC and San Diego Surf split their two games. Arsenal’s U18s took that game 2-1, while the Surf got four different goal scorers on the day from their U16s to win 4-1.

A battle between two rival Chicago clubs didn’t feature a glut of goals. Kyle Collins scored the only tally of the game, as his Sockers FC side narrowly defeated the Chicago Magic 1-0. The two U16 sides drew 2-2 on the weekend.

The two powers of St. Louis also squared off, with Scott Gallagher’s Missouri side matching up against the Metro side. Missouri’s U18s defeated Metro in the opening matchup, with goals coming from Joseph Rudd, Nick Jones and Blake Gonzalez. The U16 meeting turned into a scoreless stalemate.

Crew Soccer Academy Wolves got the better of their club sponsors in Academy action, winning both games 2-1. Ali Chealb and Oliver Harris each scored as the U18 Wolves won by a single goal.

After a struggle through last season, Houston Dynamo is in the middle of a good start to this Academy season. The wins continued over the weekend, with the U18s winning 1-0 and the U16s 2-0 over Lonestar SC.

New York Red Bulls U18s showed their dominance against MLS rivals New England Revolution, running away as 5-2 winners. Alex Muyl, a Georgetown commitment for 2013, score two goals, as did Ismar Tandir. Midfielder Erik Sa rounded out the scoring. Neither side could break the deadlock in the corresponding U16 fixture, as it ended in a 0-0 draw.

Like many other games this weekend, there was very little differentiating PA Classics and McLean Youth Soccer. PA Classics won the U18 tilt over the weekend by a 1-0 score, thanks to Zach Herstek snatching the winner. McLean’s U16s returned the favor, eking out a result by the same score.

Goals from Eli Dent and James Carlin earned the full three points for the South Carolina United Battery over Orlando City in a 2-1 victory. Orlando City’s U16s redeemed the day for the hosts, winning 3-2.