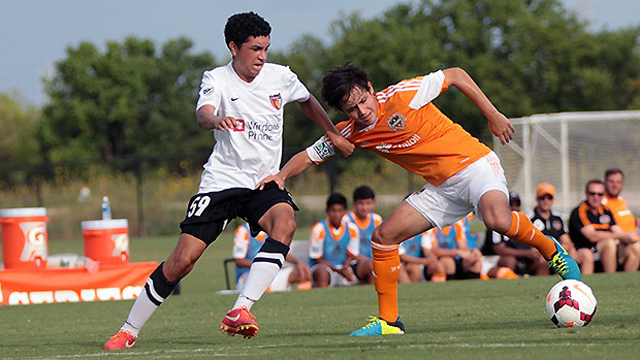 The 2012-2013 Development Academy Finals Week kicked off play on Sunday evening from the Houston Amateur Sports Park with the last 16 teams left standing battling for the two National Championship trophies – one for the U15/16 age group and one of the U17/18 age group. 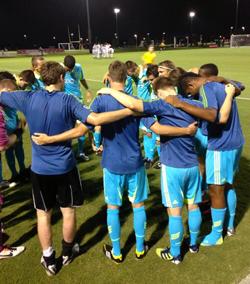 De Anza Force, one of two clubs to send both teams to the event, finished the opening day with a win and a draw. De Anza’s U16 squad looked like it was headed toward a full three points with a 2-1 lead over Colorado Rapids late, but an equalizer from Jovanni Chavez with ten minutes remaining left both teams with a point from the game. Carlos Delgadillo (Santa Clara commit) and Aravind Sivakumar (California commit) scored the goals for the Northern California squad. Edward Venta-Yepes had the other goal for the Rapids.

De Anza Force U18 battled back from an early deficit against St. Louis Scott Gallagher Missouri on its way to a 3-1 win. Zachary Kavanaugh scored the opener in the third minute, but goals by Jason Romero, Danya Kafai (Stanford commit), and Nicholas Lima (California commit) pushed De Anza to the win.

Vancouver Whitecaps defeated local rival Seattle Sounders 3-1 behind a pair of goals from Duke commit Brody Huitema. Marco Bustos had the other goal for the Caps. David Olsen had the lone goal for the Sounders.

In the other U18 fixture, New York rivals Red Bulls and Alberston SC played to a 3-3 draw. Georgetown commit Alex Muyl had two goals for the MLS Academy in the first half after Brett Nason, a Michigan commit, opened the scoring for Albertson in the second minute. Eric McKenna, a Villanova recruit, put the squads back on level terms just before half. Jeongho Ahn gave Albertson the lead shortly after half time, but a late equalizer from Jhon Estama had the teams splitting the spoils.