Despite some proclaiming LA Galaxy as the standard bearers of youth development in Southern California, Chivas USA’s Academy still plans to show up on Saturday for the Mini SuperClasico at the soon-to-be renamed Home Depot Center. 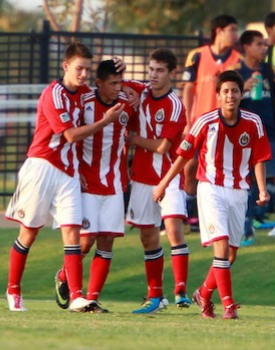 Chivas USA U18 carries a five-game winning streak into the match, as it has climbed into the playoff picture and sits in the eighth wild card spot. UC Santa Barbara commit Caleb Calvert leads the way with nine goals in the last five games after moving up an age group. Galaxy U18, on the other hand, could lock up the Southwest Division title with a win and a loss by Real Salt Lake AZ on Saturday against Pateadores.

Chivas USA U16 has already locked up the division crown in the younger age group, but don’t expect the young Goats to take it easy on Galaxy in the last regular season game for the boys in red and white.

Vancouver Whitecaps U18 could move comfortably into the lead in the Northwest Division with a pair of wins over the weekend. Caps are level with Seattle Sounders at the top of the table in the older age group, but the Canadian side has a game in hand. This weekend, Caps host San Jose Earthquakes and Cal Odyssey at University of British Columbia. Whitecaps leading scorer Brody Huitema made his return to action two weeks ago when he scored four goals in two games, but it sounds like he will be sitting out this weekend's games due to a lower body injury.

Six points this weekend from FC Dallas U18 could go a long way in wrapping up another division title for the MLS Academy. Dallas hosts Real Colorado and Colorado Rush over the weekend. The closest competitor, both in geography and in the standings, Solar Chelsea SC also takes on the two visitors from Colorado. Solar will be shorthanded as its stud center back Trevor Haberkorn departed on Thursday for Portugal to play with the U.S. U18 Men’s National Team at the Lisbon International Tournament.

It is a similar story in the U16 age group, as FC Dallas holds a one-point lead over Solar Chelsea in the Frontier Division with only three games left for both teams.

In the Mid-America Division, Crew Soccer Academy Wolves U16 has already wrapped up the division title but the Michigan club is still playing for postseason seeding this weekend with a road game against Indiana Fire Academy. Hunter Barone and U.S. U17 MNT midfielder Kostandin Moni have been the leading scorers for CSA Wolves with 17 goals between the two of them.

Chicago Fire U18 is holding down one of the final wild card spots in the play offs with only three games left on the schedule, which means taking points from every game is a priority. This weekend, Fire hosts St. Louis Scott Gallagher Missouri, which is also fighting for a chance at the playoffs after finishing as national finalist last season.

The Atlantic Division U18 title could be settled this weekend. If Players Development Academy drops points against NJSA 04 on Saturday, Baltimore Bays Chelsea would clinch the division crown with a win on Sunday against McLean Youth Soccer. Otherwise, Bays victory parade would need to wait for June when they face Potomac for the last regular season game for both clubs.

The roles reverse in the U16 age group, as PDA holds the two-point lead with two games left for both clubs.

Orlando City is clawing onto one of the final playoff spots in the U16 age group in its debut season entering the final weeks. Orlando hits the road this weekend with games against North Meck SC and Charlotte Soccer Academy – both have been eliminated from playoff contention. The Florida team is hoping Richard Prestridge can add to his goal-scoring tally of 17 this season.