With the 10-month schedule, there is one benefit for teams fresh off hard losses. There is little time to stew.

After being dealt defeats in both age groups last week by FC Dallas, Sporting Kansas City is back at this weekend with a tough game against Solar Chelsea SC on Saturday in Oklahoma. Solar is technically the home team for the game.

Sporting Kansas City still holds the top spot in the expansive Frontier Division U18 age group with a 6-1-0 record. Solar, led by U.S. U18 Men’s National Team defender and Furman commit Trevor Haberkorn, is fourth in the division with a 4-2-1 record.

Minnesota Thunder U18 faces a similar proposition after losing its rivalry game against Shattuck Saint-Mary’s Soccer Academy 5-1 last week. Thunder, looking to rebound, takes on Crew Soccer Academy and Internationals over the weekend.

Thunder and Sporting Kansas City are just two of a number of teams looking to get back in the win column. Below is a preview of some of the actions from a big slate of games.

Chivas USA is in action on Saturday against Arsenal FC. Chivas USA striker Ben Spencer marked his season debut in the Development Academy with a goal against Real So Cal last week, but it was not enough for the MLS Academy as the teams played to a 1-1 draw. The Goats will be looking to get back in the winning column and close the gap on Real Salt Lake-Arizona and LA Galaxy at the top of the division standings.

On Sunday, Pateadores takes on Real So Cal. Stanford commit and Real So Cal U18 forward Mark Vero is one to watch in this fixture, as he leads the attack for the visitors in search of their first win. 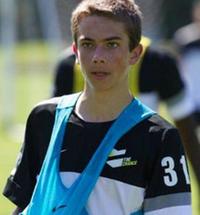 Heading in the opposite direction, Real Colorado and Colorado Rush travel to Texas this weekend for games against Andromeda and Dallas Texans. Real Colorado U18 sits in second place in the Frontier Division after eight games.

In the Mid-America Division, top team Chicago Magic PSG hosts Vardar SC Freiburg and Crew Soccer Academy Wolves over the weekend. Chicago Magic is 7-2-0 on the year with a 2.33 points per game average. Forwards Matheau Rogers and Dzenan Nezirevic have combined to score eight goals for the Magic this season.

D.C. United takes on Philadelphia Union affiliate FC Delco on Saturday in an important Atlantic Division showdown. D.C. United is currently first in the U16 age group while Delco is in second in the division. United will also enjoy the return of U.S. U15 Boys National Team defender Trey Vinson to the lineup against Delco. Vinson missed the last game while in camp with the national team. United will need him against a Delco attack that includes one of the top scorers in the nation in Doyle Tuvesson.

Fellow Union affiliate PA Classics is also in action this weekend with a game against Potomac on Saturday. Classics are third in the division in the U18 age group. Striker Joseph Julius has continued to enjoy success in the Academy with seven goals in his eight games.

New York Red Bulls, the top team in the Northeast Division, is in play this weekend with a game against South Central Premier on Sunday. The Red Bulls are undefeated in both age groups with a combined 10-0-2 record.  In the younger age though, NYRB trails Oakwood Soccer Club, which is a perfect 5-0-0 this year. Oakwood takes on BW Gottschee Academy on Sunday.

Down in the Carolinas, one of the big rivalries in the Development Academy takes place this weekend when CASL Chelsea FC hosts South Carolina United Battery on Saturday. CASL is in first in the U18 age group for the Southeast Division while Battery sits in third.