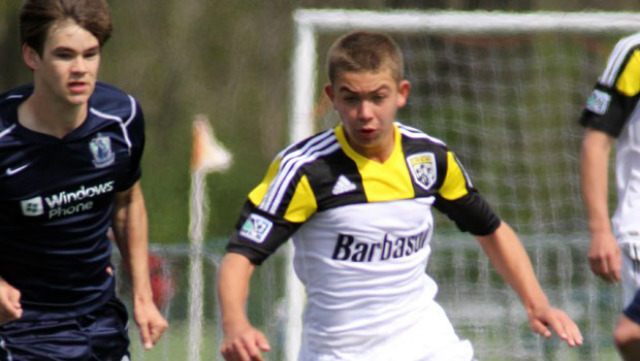 Vardar SC Freiburg U16 finds itself in a must-win game this weekend, which is a shocking proposition after how the team started the season. The Michigan team was undefeated through its first ten games – a streak that last over ten months.

After the break for the New Year though, Vardar has had trouble picking up wins and dropped all the way to the final wild card spot with only two games left on the schedule.

This weekend, Vardar faces Crew Soccer Academy. Vardar beat the MLS Academy 2-1 back in November thanks to goals from Robert Court and Nash Popovic. Michigan commit Nathan Kohl had the lone goal for Crew, but will miss out on the return leg as he recovers from a knee injury.

Crew look to be out of the playoff picture in the U16 age group, but hold the eighth place in the wild card standings in the U18 age group. A full three wins from the clash in Michigan would certainly help Crew Soccer Academy U18’s playoff bid. William Bayemi scored the lone goal for Crew when they drew 1-1 with Vardar in the first meeting of the season. High Point commit Brandon Sloan had the goal for the squad from Michigan.

Texas Rush U16 is trying to keep hold of one of the final wild card spots as well. The Rush Soccer affiliate plays its last game of the regular season on Sunday against Sporting Kansas City.

Last week, Rush recovered from a 2-0 deficit to Classics Elite with three second half goals including two in the final minute of the game to snatch all three points and keep the postseason dream alive. Will Texas Rush still have enough magic left to top a solid Sporting Kansas City side?

In the Mid-America Division, Shattuck-Saint Mary’s Soccer Academy U18 is trying to hold off Indiana Fire Academy and claim the top spot in the division. SSM hosts the two Scott Gallagher clubs this weekend up in Minnesota. Meanwhile, Indiana Fire Academy travels for a game against Internationals on Saturday.

Chivas USA U18 has been lighting up the scoreboard lately with 14 goals scored in its last three games. UC Santa Barbara recruit Caleb Calvert has six of those goals, as the prolific striker is playing up an age group. The Goats take on Real So Cal this weekend in the final home game of the season for Chivas USA. The MLS Academy closes out the season next week against the LA Galaxy.

In Northern California, San Jose Earthquakes U18 still has some work to do to keep hold of its playoff spot. The Quakes take on San Juan Soccer Club on Saturday The MLS Academy still has three other games left on the schedule this season as well.

Sneakily, NJSA 04 U18 has rattled off five wins in a row and moved into a wild card spot with three regular season games left on the schedule. This weekend, the New Jersey club takes on PA Classics. The Pennsylvania club is comfortably in a playoff spot thanks to a strong defense and SIUE commit Joseph Julius’ 16 goals this season.

The Classics U16 side is on shakier group in one of the final wild card spots. U.S. U15 Boys National Team standout Christian Pulisic should be rejoining the team for this weekend’s game against NJSA 04.

In the Southeast Division, Orlando City U16 looks to get back on track this weekend with games against IMG Academy and Chargers SC. Orlando only has one win since February and is quickly slipping out of the playoff picture.