The 2014-2015 Development Academy season wraps up this week in Carson, California where the final eight teams left in the competition are headed for a chance at a national championship. The action starts on Thursday with the semifinals for both age groups. It wraps up on Saturday with the finals.

TopDrawerSoccer previews the action below. Check back on Friday for a recap of the games.

Keys to victory: New York Red Bulls entered the postseason as the No. 1 seed and have continued to play at a high level throughout the playoffs. Red Bulls have scored 19 goals and conceded six during the four games of the playoffs to advance to this point. The potent attack is thanks to a dominance in the center of the field with a talented group of midfielders. Georgia United is the lone non-MLS academy left in the competition. On paper, that might make Georgia United look like an underdog but that is hardly the case. The boys from the Southeast Division have a number of youth national team players and a rich pipeline of talent from the youngest age groups up. GA United went on the road and defeated the Vancouver Whitecaps in a penalty kick shootout in the quarterfinals. U.S. national team prospect Andrew Carleton destroyed the dreams of Canadian children with a historic second half performance. As a team, Georgia United will need to duplicate that effort on Thursday against an equally talented opponent.

Players to watch: New York Red Bulls forward Brian Saramago, a Loyola (MD) recruit, is on fire. Saramago has seven goals in his last three games including a hat trick in the quarterfinal win against Chivas USA. Saramago has been prolific in front of the goal and a difficult player to stop for any defense. The key for Georgia United is not to stop Saramago directly, but to cut off his supply line. Midfielders Chris Goslin and Juan Pablo Torres will be the key pieces to slowing down the Red Bulls attack and keeping the ball when Georgia United wins it back from the MLS academy.

Keys to victory: Philadelphia Union is a pretty predictable team. Union have a strong defense, solid midfielder, and quick attack. Philadelphia relies on the game wearing down the opposition and then taking advantage of the fatigue in the second half. Only two out of the 12 goals Union has scored in the postseason have come in the first half. This is a team that thrives when it can bring Raheem Taylor-Parkes speed off the bench and open the game late. FC Dallas is the type of team that keeps the ball for 80 minutes and then lets the other team have it back after the final whistle. The possession-dominant style has suited FC Dallas quite well, as the Texas club has not given up a goal since May.

Players to watch: FC Dallas attacker Devin Vega has been relatively quiet throughout this run to the semifinals. The U.S. U17 Men’s National Team player only has one goal in four games, which is far off his average of nearly a goal a game during the regular season. This could be the game where Vega breaks out from that streak. He is excellent at finding pockets of space and that has been the key to breaking down Union in the past. Union meanwhile will be counting on goalkeeper Andrew Verdi to make the key saves early in the game.

Keys to victory: Can San Jose stop RSL? It’s been the question of the postseason for every team standing in the way of RSL and destiny. A 100-point regular season propelled RSL to the No. 2 seed for the postseason. Since then, there have been speed bumps including Shattuck-Saint Mary’s putting RSL on the ropes, but the residential academy responded with an uppercut knockout. RSL beat San Jose 3-0 in the meeting during the regular season. San Jose is a world away from that team, but it’s still going to take a bit more to knock out the Goliath of the Development Academy U18 playoffs.

Players to watch: Edgar Duran is scoring thunderbolts with his feet, which is not something you see often from a youth player. With more teams trying to park the bus against RSL, it takes a bit of magic from distance to find the back of the net and Duran offers that to a squad, which is playing at a different level than most in the Academy. Earthquakes are no pushover though. Alex Valencia has been tremendous in the center of the field for San Jose in the playoffs. U18 MNT goalkeeper James Marcinkowski is bringing a 270-minute shutout streak into the game.

Keys to victory: Montreal Impact is in the semifinal of the U18 Development Academy, but it still does not appear that this team has played its best soccer yet this summer. Will Impact bring its A game to Carson? That is what the Canadian academy will need against a Chicago Fire side that is buzzing with confidence after an impressive road win against Houston Dynamo last week. The question for Fire might be fatigue. Cameron Lindley and Mauricio Pineda are currently in camp with the U18 MNT, which is adding to a long month already for the duo.

Players to watch: Ballou Tabla continues to be the main attraction for Impact. The attacking talent is mesmerizing to watch. His change of pace and elusiveness in tight spaces are rare traits that can really shift a defense at this will. Chicago has plenty of talent to go punch for punch with Impact. Michigan State commit Ryan Sierakowski stepped in the quarterfinal round. He was the leading scorer this season with 24 goals. 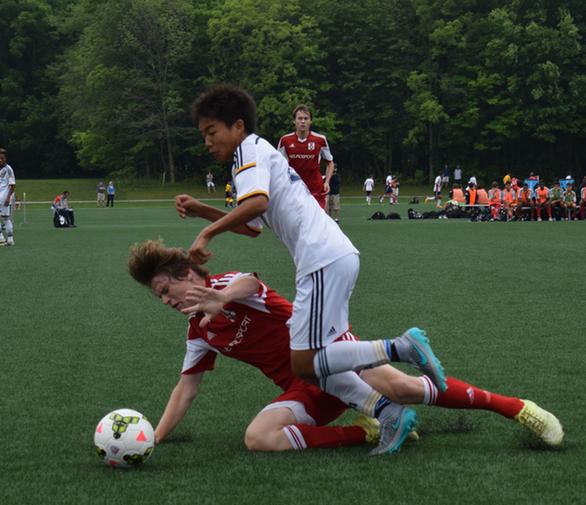