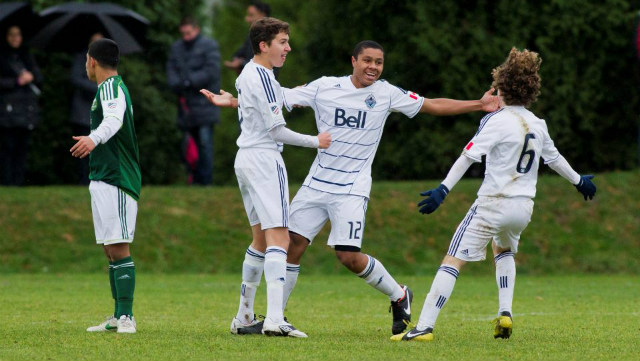 One of the matchups of the weekend saw the Academy version of the Cascadia Cup contested between the Portland Timbers and Vancouver Whitecaps. Vancouver’s U18s took a 2-0 lead into halftime during the first meeting of the day, only to see the Timbers score six goals after the break to win 6-3. James Nosack and Stefan Wutte had a hat trick each. The Whitecaps U16s earned a split on the day, winning 2-0. 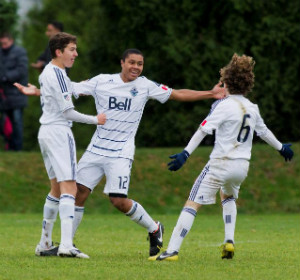 The two Northwest sides weren’t the only rivals to meet, as Seattle Sounders FC faced crosstown club Crossfire Premier. Two early goals from Jordan Morris and Henry Wingo helped Seattle to a 3-1 win, while the two U16 sides split the point 2-2.

Gian Carlos Rojas provided the perfect start for the Houston Dynamo U18s, scoring in the 12th minute against Solar Chelsea. Carlos Ibarra put the game out of reach in the 80th minute, his tally sealing a 2-0 result for the Dynamo. Solar’s U16s pulled out the 2-1 win to split the two matches.

A pair of games between FC Dallas and Texans SC Houston provided two forgettable matchups, as both ended in 0-0 ties.

The undefeated season for New York Red Bulls U18s continued, as they moved their record to 10-0-3 through the end of the year. The latest win came from a 4-2 defeat of Oakwood SC, Ethan Decker’s two goals leading to the victory. New York’s U16s also won, by a close 1-0 margin.

A quartet of games for NJSA on the road down in Virginia was a proving ground for success for the New Jersey club. Alexander Ramos scored the only goal for the U18s in a defeat of the Virginia Rush, while NJSA’s Josh Goldstern led the U16s to a 2-0 win. Only a 0-0 draw for the U18s against the Richmond Kickers prevented a four-win weekend, as Goldstern tallied again in a 3-1 victory.

McLean Youth Soccer wrapped up a fairly successful fall of 2012, as the U18s defeated the Kickers 4-1, while the U16s routed the Richmond side 7-0.