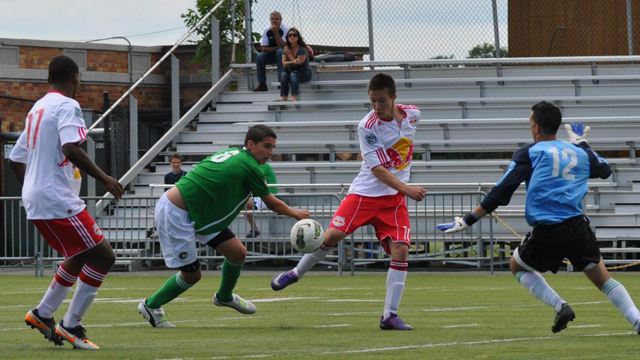 Orlando City Youth Soccer thought it was going to have to wait another year before it could join the U.S. Soccer Federation’s Development Academy.

After all, that is what the club was told in March by U.S. Soccer.

U.S. Soccer Director of Scouting Tony Lepore and his staff of advisors had many positives to say about what the club was doing, but thought it would be another year until there was a spot for the team.

Then in May, that spot, unexpectedly, opened up for Orlando City.

The Development Academy revoked Birmingham United Soccer Academy’s spot and awarded it to Orlando City to even up the numbers for that area. 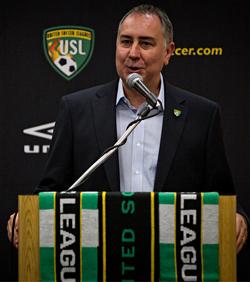 “I think the key change was the Southeast region losing a club in Alabama,” Orlando City owner Phil Rawlins told TopDrawerSoccer.com over email. “That opened the door for us to come in a year early, we were ready to step up and were pleased to be asked to fill the gap.”

While the inclusion is a pleasant surprise, Orlando City made some compromises for the early inclusion.

“I think our biggest challenge will be getting our boys ready for the competitive nature of the Academy, it’s a different level to where the boys have competed in the past,” Rawlings said. “The other big challenge is that as a part of our entry into the DA League we agreed to play several ‘home’ games on the road this first year. This brings its own challenges of travel and playing fewer home games.”

Orlando is also joining forces with Florida Rush to help bolster the rosters of the two Academy teams, but Rawlings said that OCYS has final say in terms of roster control.

“We have been talking to the Rush for more than 8 months now about our collaboration on the Development Academy, so it has been something of a natural evolution,” Rawlings added. “On player selection, as in all aspects of the relationship, it’s a collaboration between the two clubs, however, at the end of the day the two coaches and our Senior Academy Director, Paul Shaw, will have the final say.”

Orlando City will open up the 2012-13 season on September 8 with a game against North Carolina Fusion.

While OCYS waits five more months for their first taste of Academy play, many of the current Development Academy clubs were in action last weekend, which turned out to be one of the most lopsided weekends in Academy history.

In the South Conference, North Carolina Fusion U18 spanked Virginia Rush 8-0. Out west, Vancouver Whitecaps U18 crushed local rival Seattle Sounders U18 in a 9-0 win on Sunday.

But that was not even the most one-sided result of the weekend. Players Development Academy U16 holds that honor following a 10-0 thrashing of Met Oval on Sunday.

TopDrawerSoccer.com Team of the Week:

LA Galaxy Academy, even with players off at the reserve game, had little trouble with Nomads SC on Saturday and clinched the title in the SoCal Division for both the U16 and U18 age groups.

The U18 squad cruised to a 5-0 win over Nomads thanks to two goals from Justin Dhillon.  Chivas USA U18 finished second in the standings, one point behind Galaxy, after a 5-2 win over Arsenal on Saturday. Forward Mark Verso scored all five goals for the Goats.

In the U16 games, Galaxy trotted out an inexperienced squad and still managed a 2-0 win to claim the top spot in the division. Arsenal FC (California) U16, out of the mix for an automatic spot in the playoffs, still holds the top spot in the Wild Card Race after a 4-1 win over Chivas USA.

In the Northwest, Vancouver Whitecaps U18 destroyed Seattle Sounders 9-0 behind hat tricks from Yassin Essa and Caleb Clarke. The game was relatively meaningless for postseason implications, but the lopsided victory will carry some significance when these two clubs meet again.

On the opposite coast, Baltimore Bays Chelsea U18 continued its hot streak since the start of 2012 with a 5-0 win over Potomac. Richard Greensfelder led the way with two goals in the win. Ishmaiah Calwrie, Jeremy DeGraffenreidt, and Michael Gamble also scored in the shutout victory.

The Bays are top of the Mid-Atlantic Division and could clinch a spot in the playoffs with two wins next weekend against Match Fit Chelsea and NJSA 04.

Up the coast, New York Red Bulls U18 enjoyed a six-point weekend with wins over NY Cosmos Academy and Met Oval. Brandon Allen led the charge in the win over Cosmos with three goals in a 4-1 victory. NYRB is top of the division with a one-point lead over PDA, who drew 1-1 with Cosmos on Sunday.

PDA is top of the division in the U16 age group though. Beyond the 10-0 win over Met Oval, the New Jersey club also collected a 2-1 win over New York Cosmos on Sunday. Kazari Trought and Zach Knudson scored in the victory.

In the Northeast Division, Empire United is in prime position to claim a playoff spot. The New York club defeated Oakwood Soccer Club and South Central Premier over the weekend to usurp the top spot with only three games left to play.

In the U16 age group, it is a three-team race with Oakwood Soccer Club, FC Greater Boston, and New England Revolution fighting for the two automatic spots in the playoffs from each division.

By virtue of various results over the weekend, Shattuck-Saint Mary’s U18 clinched a berth in the playoffs without even playing. SSM is back in action this week with a chance to win its division. The Minnesota club only needs two points from its final three games to win the Frontier Division.

In the Great Lakes Division, Chicago Fire U18 suffered its first set back since April in a 3-3 draw against FC Milwaukee. The high-scoring affair ended a five-game winning streak for the MLS club. Fire bounced back on Sunday with a 1-0 win over Sockers FC.

Fire U18 have already won the division and look to be one of the top seeds for playoffs when they kick off at the end of June in Frisco, Texas.

Chicago Fire U16, top of its division, is still battling to secure a playoff spot with two games remaining on the docket. Crew Soccer Academy Wolves and Chicago Magic PSG are both nipping on the heels of the Fire in the division.

Over the weekend, Fire earned a pair of 1-0 win over FC Milwaukee and Sockers FC on the road. U.S. U15 national team midfielder Colin Fernandez and John Moderwell netted the winning tallies.

In Texas, Solar Chelsea SC U18 and Texans SC Houston are locked step for step in the battle for second place in the division. Both teams sit on 42 points with two games remaining.

Solar pulled level on points with Texans SC Houston with its 3-1 win over Andromeda FC on Sunday. William Webb, Mason Miller, and Zachary Mathers all found the back of the net for Solar.

It is nearly an identical story in the U16 age group with FC Dallas, Solar, and Texans SC Houston all within two points of each other for second place.

Virginia Rush U18 hit a historic low on Sunday. The Rush Soccer affiliate finished the regular season with a 0-14-0 record in division play after 8-0 and 4-0 losses to North Carolina Fusion and CASL Chelsea FC Academy.

The 12 goals surrendered also pushed the overall season tally for Rush to 100 goals conceded in 25 games.

At the top of the division, Charlotte SA notched wins over Richmond Strikers and McLean Youth Soccer. Roland Minogue and Benjamin Burdon scored for Charlotte in the 2-1 win over the Richmond Strikers. Kyle Parker and an own goal saw Charlotte top McLean 2-0 on Sunday.

Charlotte SA also holds the top spot in the U16 age group after a pair of wins over the weekend. Kipp Carriker and Tomas Hilliard-Arce scored in the 2-0 win over Richmond Strikers.

Down the coast, Weston FC U18 topped Kendall SC 2-1 in the Southeast Division. Weston FC is in second place in the division with two games remaining. The Florida club only trails division leaders South Carolina United Battery by a point.

For the younger age group, Weston FC U16 played to a 1-1 draw with Kendall SC. Sergio Lujan scored frist for Kendall before Darren Rios answered for Weston FC in the second half. Weston FC is also in second place in the division in the U16 age group behind South Carolina United Battery.