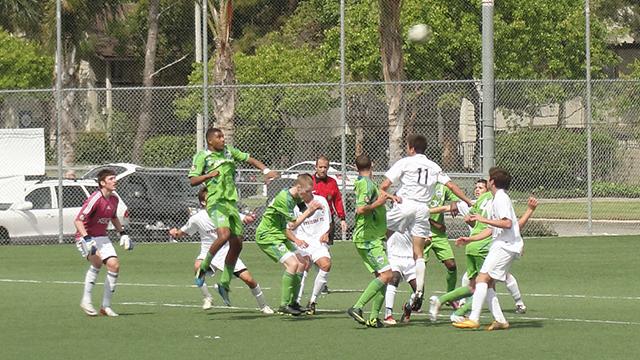 The rarity of special players is what makes seeing them in person so extraordinary.

On Saturday, UC Santa Barbara commit Emannuel Boateng showed exactly why it is easy to call him an exceptional talent.

It is pretty rare for a club to add a player of Boateng’s quality midway through the season, and that fact did not elude Strikers FC U18 head coach Ruben Fernandez after the game.

“We have been playing good soccer – this is a very hard-working group,” Fernandez told TopDrawerSoccer.com. “We just didn’t have that special player and it is a big help for us. He is obviously a special player.”

The coach went onto say that now that his team had added that missing piece, the wins will start to come after an unlucky, difficult start to the season.

His prediction rang true on Sunday, as Strikers topped Crossfire Premier 2-0 to improve to 7-10-2 on the season.

Boateng has escaped much of the national limelight while starring for Cate School, a small, private boarding school in the suburbs of Santa Barbara, California, over the past three seasons in the lowest division of CIF athletics.

The 18-year-old arrived in the United States in 2010 via the Right to Dream academy, which helps children in Ghana find new opportunities. Seattle Sounders midfielder Michael Tetteh and Marquette University’s James C. Nortey are also graduates of Right to Dream.

The explosive left-footed attacker figures to be a crucial piece for the Gauchos in the fall, but for now, can he do enough in the Strikers’ final eight games to push them into playoff contention?

Strikers FC U16 topped Seattle Sounders 4-0. The MLS academy had multiple players playing up with the U18 team and was a bit shorthanded. It also did not help when Ryan Harber was red carded shortly after half. Strikers took advantage of the numerical gain with goals from Christian Thierjung, Daniel Herrerea, Felipe Liborio Jr., and Adam Lenth.

Crossfire found some success on the trip to Southern California with a 3-2 win over Pateadores on Saturday. Pateadores’ prolific striker TJ Casner scored twice, but Crossfires’ Ian Adams answered with two of his own. Carlos Aceves-Dela Cruz netted the game-winner for the Seattle club.

In the U16 game, former Chivas USA star Christian Carrillo was on point for Pateadores in a 2-0 win. Nahum Paz also scored for the Pats.

In a Northwest Division showdown, Vancouver Whitecaps U18 beat De Anza Force in a meeting between top teams. The visitors from Northern California overcame an early goal by Spencer DeBoice via goals from Greg Singer and Luc Brubaker. But the visitors could not hold on and an own goal and strike from Ben Fisk secured three points for the MLS Academy.

In the younger fixture, De Anza Force fought back from a 2-0 hole at half to claim a draw on the road. Joseph Bolous scored early in the second half and Arya Haghighi equalizered in the final moments.

San Jose Earthquakes U16 defeated Cal Odyssey 1-0 behind a late second half goal from Roberto Mendoza. The Earthquakes are now 5-3-1 on the season and fourth in the Northwest Division.

In the lone fixture between SoCal Division foes, Arsenal U16 topped Real So Cal 4-3. Mason Klerks scored twice, while Paul Arriola and Jose Garcia also scored for the winners. Christian Chavez had a brace for Real So Cal and Luis Carbajal added another in a losing effort.

Indiana United Fire Academy claimed two wins on Saturday. The U18 team topped Internationals (Ohio) 2-1 thanks to goals from Ahmed Mitchie and Michael Galullo. Indiana United Fire U16 cruised to a 3-0 victory behind a brace from Joey Bastian. Rece Buckmaster scored the other goal.

In Texas, the Texas Rush U18 mounted an impressive comeback in a 3-3 draw against Solar Chelsea SC on Saturday. Solar’s Samuel Hayward, Ryan Condotta, and Chandler Crosswalt all scored in the opening 23 minutes, but Rush grabbed one back right before half via Diego Galdamez.

Rush carried the momentum into the second half and completed the comeback with goals from Carlos Mendoza and Philip Piper to steal a point after a horrendous start.

Dallas Texans U18 rolled over Classics Elite 5-0 on Saturday with five different players finding the back of the net. Brandon Aubrey, Barry Foster, Geoffrey Hill, Slyvester Contreras, and Andre Reyes all scored for the Texas.

The U16 game was not any kinder to Classics Elite. Cooper Whitfield, Christian Soldat, and Jason Machado each scored two goals apiece for Dallas Texans U16 in a 6-0 win. The Texans are now 16-1-7 on the season and ten points clear at the top of the division.

Roland Minogue IV scored both goals for Charlotte SA U18 in a 2-0 win over North Meck on Saturday. Minogue now has seven goals in 14 games, as Charlotte continues to close the gap at the top of the Atlantic Division.

In the U16 clash, Charlotte SA suffered its first loss of the season in division play. A second half goal from Chukwuka Anyafo propelled North Meck to a 1-0 win.

In Florida, Kendall SC U18 beat Clearwater Chargers 3-1 on Saturday. Daniel Gonzalez, Nahuel Medina, and Dario Vanegas scored for Kendall in the victory.

Clearwater Chargers U16 stormed past Kendall SC in the U16 game. Brandon Kim, Austin Myara, Bakie Goodman, and Nicholas Day all scored in the 4-0 result.

On Sunday, Nicholas Pappacena continued his stellar season with two goals in a 5-1 win for Weston FC over Clearwater Chargers. Pappacena now has 11 goals in 17 games.

This season is going from bad to worse quickly for the South Central Premier (Connecticut) U16 team.

Oakwood Soccer Club (Connecticut) was the latest to beat up on SCP. Luke Nguyen recorded a hat trick for Oakwood in a 3-0 win and SCP dropped 0-9-0 on the season with a negative 32-goal differential.

On the other end of the spectrum, New York Red Bulls had a perfect weekend with four wins in four games. It started on Saturday with a prototypical game-winner from Georgetown commit Brandon Allen in a 1-0 win over Match Fit Chelsea. Allen wasn’t done for the weekend though. He added another game-winner the next day in a 2-0 win over NJSA.

The scoring was more spread out for the New York Red Bulls U16 team. Malcolm Dixon, Derrick Etienne, Amando Moreno, Alex Muyl, and Adam Najem all scored in a 5-0 win over Match Fit Chelsea on Saturday.

Baltimore Bays Chelsea U18 ran its winning streak to five games on Saturday with a 3-0 victory over FC Greater Boston. Yaw Amankwa, Tanner Vosvick, and Ishmaiah Calwrie scored for the winning side.

In the U16 game, FC Greater Boston handed Baltimore Bays Chelsea its second loss of the season in a 1-0 game. Harrison Swartz scored for the Massachusetts club.