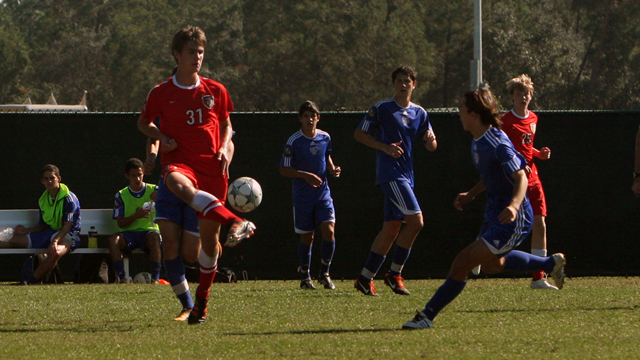 It was not a matter of if; it was a matter of when for the Dallas Texan’s U16 side securing a spot in the playoffs.

After starting the season with a 19-game undefeated run, the Texans U16 team held the top spot in the division for much of the season, and have yet to relinquish control. 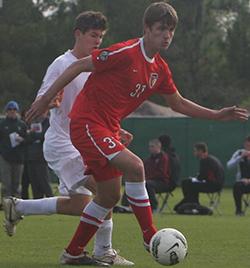 On Saturday, the boys from Dallas wrote their names in ink for a postseason berth to the USSF Development Academy playoffs with a 6-1 win over Andromeda FC. Christian Soldat scored three goals in nine minutes in the second half, and it was cruise control for David Hudgell’s side.

The Texans need four points from their final three games to win the division.

Pateadores U18 battled back from a two-goal deficit in the second half and claimed a 2-2 draw against San Diego Surf on Saturday. Santa Clara-bound Jared Hegardt and UC Davis-bound Eric Budniewski scored for the Surf. An own goal and Roberto Escuerdo put Pateadores back on level terms.

Saturday’s draw was the last fixture of the season for the Pateadores, which end the regular season on a five-game undefeated run and currently hold the final spot in the wild card race with a 1.63 points per game average.

It was a similar story in the U16 game with Surf finding an early opening goal via Kostas Kostellas, before Pateadores battled back with a goal from former Chivas USA Academy hit man Christian Carrillo.

In the other SoCal Division clash on Saturday, Strikers FC U18 topped Nomads 4-0 behind goals from Gbogo Adebayo-Ige, Emmanuel Bouteng, Joshua Rosenstrauch, and Avery Schwartz. Nomads claimed a 4-2 win in the U16 matchup.

On Sunday, Real Salt Lake-Arizona hosted Real So Cal in another SoCal Division clash. Real So Cal U18 pulled off a minor upset with a 2-1 victory. It is the first loss for RSL-AZ U18 at home this season. RSL-AZ U16 did protect home turf with a 2-1 victory in the afternoon game.
The two LA MLS Academies headed up into Washington for a pair of out of division games over the weekend.

Crossfire Premier U18 welcomed the competition with open arms, and then kicked them back to SoCal. The Washington club started the weekend with a 5-0 win over Chivas USA U18. On Sunday, Crossfire completed the six-point weekend with a 2-1 win over LA Galaxy.

Seattle Sounders U18 did not fare nearly as well with only one point from the two games. LA Galaxy won the meeting on Saturday 4-0 behind a brace from UC Santa Barbara commitment Drew Murphy.

Sounders managed to earn a point on Sunday against Chivas USA thanks to a late equalizer from Stanford recruit Aaron Kovar, who converted a penalty kick.

In the younger age group, both Galaxy and Chivas USA recorded four points from the two games. Galaxy played to a wild 4-4 draw against Sounders on Saturday, and defeated Crossfire 2-1.

Chivas USA fought to a scoreless draw against Crossfire, and then topped Sounders 3-2 on Sunday.

Chicago Fire U18 beat cross-town rival Chicago Magic PSG 4-1 on Sunday to keep its undefeated record in division play alive. Fire was short-handed due to an MLS reserve game on the same day, but still managed to extend its undefeated run to 15 games.

Crew Soccer Academy Wolves U16 continued its slip on Sunday with a 2-0 loss to Indiana United Fire Academy. Crew started the season with a 15-game undefeated run, but since the start of May, the Michigan club has only managed one point from three games.

Oliver Harvey scored twice in the final four minutes to help FC Westchester U18 secure a point against Albertson SC. Jake Freeman and Franky Villegas scored for Albertson. Freeman, the Harvard-bound midfielder, leads the New York club in scoring with 17 goals in 20 games.

Empire United U18 pushed its winning streak to four games on Sunday with a 3-0 victory over Seacoast United. Empire is top of the Northeast Division with a perfect 3-0-0 record.

The remarkable run of results from Baltimore Bays Chelsea U18 reached 14 games without a loss on Sunday. The only blemish from that 14-game run was a 3-3 draw against New York Red Bulls in April.

Over the weekend, the Bays beat PA Classics and FC Delco. U.S. U18 Men’s National Team defender Malcolm Harris had both goals in the 2-0 win over PA Classics.

South Conference
CASL Chelsea FC Academy and Charlotte Soccer Academy played to a draw in both ages on Sunday. In the U18 game, the two teams locked horns for a scoreless result, which left CSA in second and CASL in fourth in the division.

The U16 game finished in a 1-1 draw, which has CSA still in first place in the division and CASL in third with three games in hand.

Luis Betancur scored nine minutes after entering the match in the second half and Weston FC U18 held on to a 1-0 win over Kendall SC on Saturday. Weston U16 won the later clash 3-0 thanks to goals from Nicholas Pappacena, Ricardo Castro, and Nicholas Midttun.