One of the biggest challenges that comes up so often in the Development Academy is the vast distances teams must cover in the search for meaningful games. 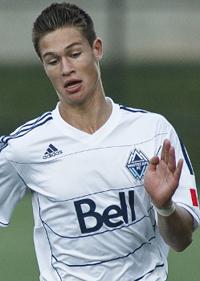 It was exactly what confronted both Chivas USA and LA Galaxy Academies over the past weekend, as the two teams traveled up to the Pacific Northwest for games against Vancouver Whitecaps and Crossfire Premier respectively. The results for both teams were decidedly mixed.

Chivas USA U18s got their weekend off to an emphatic start, securing a 3-0 win over Crossfire, thanks to two goals from UC Santa Barbara commitment Caleb Calvert. Crossfire’s U16s bested the Goats however, as Austin Giftopoulos and Samuel Gomez led the Seattle-based side to a 2-1 win.

On Saturday, LA experienced similar mirrored results against its Vancouver opponent. The U18s suffered a 3-0 loss against the Whitecaps, thanks to goals from Titouan Chopin, Brody Huitema and Mitch Piraux, but the Galaxy U16s scored three times in a 3-0 win for the visiting team.

Sunday saw the two teams flip flop opponents, with Chivas USA earning a pair of wins – Calvert was once against the hero for the U18s side, as he scored goals in the 85th and 87th minute to provide the difference. His winning tally came after a Huitema goal in the 86th minute tied proceedings at 2-2. The U16s earned a much more comfortable 3-1 win over their Canadian opponents.

The Galaxy, which crossed the border to matchup against Crossfire Premier, saw their U18s draw 2-2, and the U16s suffer a 3-0 loss at the hands of their domestic opposition.

Jose Navarro, Tony Murillo and Jonathan Stadler all found the back of the net as Real Salt Lake-AZ U18s took care of business on its home field, defeating San Jose Earthquakes 3-0. The Earthquakes U16s made sure to split the games on the weekend, as they scored two goals after the half to beat RSL by a 3-1 score line.

It continues to be strong season for the Houston Dynamo Academy from a results perspective, for both their U16 and U18 teams. Jose Agredo and Jose Rodriguez accounted for the goals in the U18s 2-0 win over Lonestar SC, while the U16s strolled to a 5-1 victory, which included a two-goal performance from Elochukwu Ozumba.

A trip to Georgia didn’t go very well for Orlando City Youth Soccer. In four games – two against Concorde Fire and two against Georgia United – the club conceded 16 goals and managed to find the back of the net three times. Orlando City’s U18s fell 6-1 at the hands of Concorde Fire, while the U16s were edged 2-1. Sunday saw the team match up against United, where they lost 4-0 and 4-1 respectively.