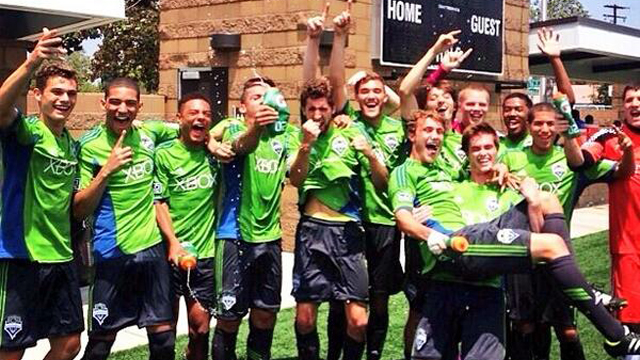 The Development Academy schedule was abbreviated for the holiday weekend, but there were still some meaningful games on the schedule including a showdown in Southern California that decided a division title.

It was a weekend for fireworks in the Northeast Division. New York Red Bulls U18, the division champions, started the weekend with a 7-0 thrashing of BSC CT Academy on Saturday. Star midfielder and Georgetown recruit Arun Basuljevic led the way with four goals. The two clubs battled to a scoreless draw in the U16 game. Red Bulls finished the day undefeated with a 5-1 win in the U14 fixture. Zach Ryan scored twice to lead the way.

Not to be outdone, Montreal Impact FC, the second place side in the division, captured a 5-1 win on Saturday over Albertson SC U18. Zie Mohamed Dagnogo scored a hat trick. Montreal also rolled in the U16 game with a 6-0 victory. Both Jimmy-Shammar Sanon and Louis-Philippe Paquin scored twice in the win.

New England Revolution made the loudest splash though, as the MLS academy rolled to a 10-0 win on Sunday against Everton FC Westchester U18. Amadu Kanuteh scored a hat trick. The two clubs played to a 1-1 draw in the U16 game. Daniel Sydor and Derek Blanchette scored for their respective sides.

PA Classics U18 scored a big win over the weekend thanks to a very late strike from Andrew Skundrich. Classics defeated NJSA 04 on Sunday 2-1 behind the 93rd minute goal from Skundrich. Armin Efendic scored the other goal. Classics have won four games in a row and moved into a playoff spot with three weeks left in the regular season. Classics U16 also recorded a win on Sunday with a 4-0 result. Austin Maloney scored twice and McKinley Curran and Justin Torres each had a goal.

Chargers Soccer Club U16 kept its dream alive of a spot in the playoffs with a 3-0 win over IMG on Saturday. With two games left in the regular season, Chargers sit in the final wild card spot for a playoff berth.

Caleb Smith scored the lone goal and Solar Chelsea SC U18 secured an important 1-0 win over Texas Rush on Saturday. Smith’s third goal of the season came with 10 minutes left in the game as he lifted Solar to its fourth win in a row. Solar holds a two-point lead over Houston Dynamo for the third spot in the division with both teams in action this weekend. Solar U16 also nabbed a win over the weekend with a 3-2 victory against Texas Rush. Twins Oscar Greene and Alex Greene scored in the win.

FC Dallas U18’s minor slip of form continued on Saturday as it was held to a scoreless draw against Sporting Kansas City. After starting the season with four wins for its first five games, FC Dallas has only taken one win from its last five games. Sporting KC U18, meanwhile, close out the regular season with two games against Houston Dynamo this weekend. Sporting KC, likely, needs four points from the series to stay in the hunt for a playoff berth.

Portland Timbers U18 ended the regular season on an eight-game unbeaten run after a four-point trip to Southern California. Timbers defeated Strikers FC 2-1 on Saturday thanks to goals from Nicholas Ballenger and Benjamin White. Timbers nearly had a second win on Sunday against Pateadores but a late goal from Bryan Chavez forced the teams to split the points in a 2-2 draw. Brian Pacheco scored the other goal for Pats while Anthony Macchione and Peter Prescott scored for the Timbers. Timbers sit in the 12th spot in the wildcard pool, which means it will be a nervous couple of weeks for the Oregon side as only 13 teams earn playoff berths from the wildcard pool.

Seattle Sounders U18 clinched the Northwest Division title with a 4-0 win over Strikers FC on Sunday. Pateadores delayed the party with a 1-0 win over the Sounders on Saturday, but the Washington club bounced back with a strong performance to end the weekend. Duncan McCormick and Victor Rojas both scored twice for Sounders in the win.

The fortune was not quite as kind to the Sounders U16 side as Pateadores struck late to snag a 3-2 on Saturday. Eder Oliva scored the game-winner in the final minute of the game, which was his second of the game. The same story played out on Sunday as the Sounders were denied full points thanks to a Zen Roten goal for Stirkers FC with four minutes left. The one-point trip left the Sounders two points back of the top spot in the division with only one game to play.