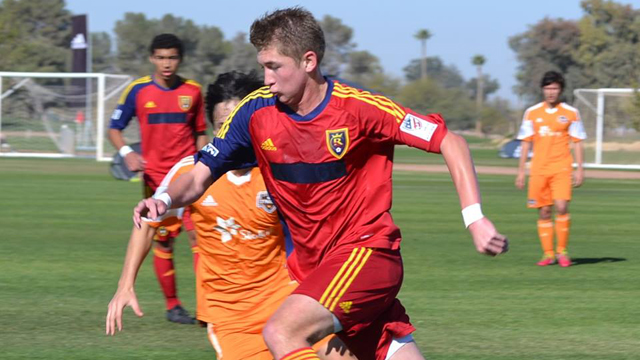 Texas Rush U18 pushed its unbeaten run to six games with a 3-1 win over Texans SC Houston on Saturday. Denzel Ward scored twice to push Rush to the win. Ryan Stinebaugh scored the other goal for Rush. Joshua Ayala had the lone goal for Texans SC Houston. Texans SC Houston U16 nabbed a victory in the second game thanks to a pair of late goals from Daityn Knutson. Fabian Adame scored for Texas Rush.

Houston Dynamo rolled to a 5-1 win over Lonestar SC Academy on Saturday. Mac Reyes, Emmanuel Usen, Christian Lucatero, Irvin Ramirez, and Thomas Barboza scored for the MLS academy. Ryan Porch scored for Lonestar. The two clubs battled to a 2-2 draw in the U16 fixture.

FC Dallas U18 stretched its lead at the top of the Frontier Division with a 2-0 win over Andromeda on Saturday. Oscar Romero and Alex Radilla scored late in the second half to give FC Dallas the win. The two clubs played to a 0-0 draw in the U16 game.

Stephen Ravazzoli, Oliver Smith, and Rolf Schlettwein scored for IMG Academy U18 in a 3-2 win over North Carolina Fusion. Benjamin Harris and Julian Montoya scored for Fusion. NC Fusion won 2-1 in the U16 game behind goals from Faisal Almubaslat and Nicholas Graves. IMG U18 nearly had a perfect weekend, but was denied full spoils against Capital Area RailHawks Academy- CASL on Sunday in a 1-1 draw. James Street scored in the final moments to earn a point for CASL. Christian Boorom scored the goal for IMG.

John Redquejo Jr. and Spencer Held scored in the final 20 minutes to lead Real So Cal U18 to a 2-0 win over Chivas USA. Justin Vom Steeg logged the shutout in goal. Chivas USA roared back in the U16 game with a 7-2 win. Jonathan Hernandez and Ivan Gutierrez each scored two goals. Arturo Garcia, Andrew Mendoza, and Iban Servin also scored for Chivas USA.

Real Salt Lake U18 rolled to a 4-1 win over San Diego Surf on Saturday. Eric Carbajal and Damian German each scored two goals for RSL. Washington commit Justin Fiddes scored for Surf. The two clubs played to a 1-1 draw in the U16 game. Sebastian Saucedo scored for RSL. Jacob Cintas scored for Surf. RSL U18 completed the six-point weekend with a 3-2 win over Nomads on Sunday. Sam Gleadle scored twice. RSL U16 also beat Nomads with a 2-0 result. Evan Waldrep and Saucedo scored.