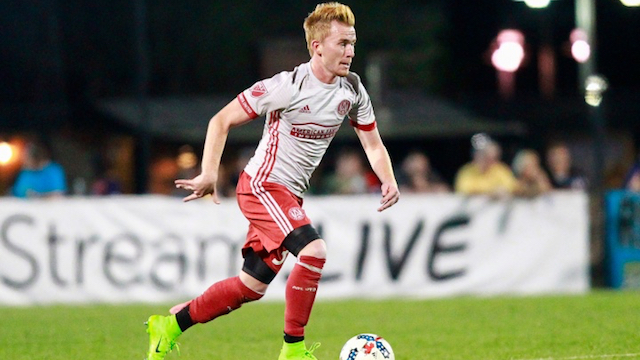 The Development Academy Season ends this weekend at the National Training Center in Carson, California with the semifinals and championship games from the U15/U16 and U17/U18 age groups. The action stars on Friday afternoon with the first semifinal from the U15/U16 age group. TopDrawerSoccer will be on hand for all of the games in Carson.

Check out a brief preview of the semifinal round below and check back tis weekend for exclusive TDS content from the event.

How they got here: FC Dallas finished the season as the No. 1 seed in this age group. The Texas MLS academy continued to roll through the competition in the postseason with a 5-2 win over Baltimore Armour and a 3-1 win over New York City FC in group play. A draw against Crew SC Academy on the final day of group play was enough to send FC Dallas into the quarter finals. FC Dallas destroyed Colorado Rapids 5-0 in the clash between Frontier Division rivals and booked a spot in the semifinals. Real Salt Lake AZ only surrendered one goal in pool play of the playoffs with 2-0 and 3-0 wins over Sacramento Republic and Real Colorado to kick off the event. Vardar held RSL AZ to a 1-1 draw in the final game of the group but it was a superficial result with RSL already on the way to the quarterfinal round. In the final eight, RSL AZ went on the road and beat Sporting KC 3-0. RSL AZ was the only U15/U16 team to win on the road in the quarterfinal. Friday’s meeting will be the first of the season between the two sides.

Players to watch: FC Dallas forward Jesus Ferreira, already a Homegrown signing, rejoined the U16 team in the playoffs after playing with the U18s or the first team all season, scored three goals in the quarterfinal win over Colorado Rapids. Ferreira very well could be the best player in Carson this weekend as he looks to lift FC Dallas to another Development Academy championship. There is plenty of talent on the other side as well. Midfielder Luis Arriaga and goalkeeper David Ochoa are the two to watch in the semifinal. If they are both on their game, RSL AZ should be able to pull off the update.

How they got here: Atlanta United squeezed through group play to get into the knockout round of the playoffs. United started the postseason with a 1-1 draw against Montreal Impact. United bounced back with wins against Chicago Fire 4-1 and PDA 1-0 to win the group. In the quarterfinal, Atlanta United beat Bethesda 4-1 behind goals from James Brighton, Dylan Gaither, Zyen Jones, and Andrew Carleton. A late goal from Keisean Brooks in the final game of group play from the playoffs put Vancouver Whitecaps into the knockout rounds of the competition. Whitecaps needed a win against LA Galaxy after splitting their first two games in the group. Brooks delivered the tally in the 73rd minute and the Canadian side moved into the quarterfinals. Goals from Jefferson Alade, Jose Hernandez, and Alessandro Hojabrpour pushed Vancouver Whitecaps to a 3-0 win over the Seattle Sounders and into the final four.

Players to watch: The Atlanta United attack is impressive. U.S. U17 Men’s National Team standouts Andrew Carleton and Zyen Jones will be the ones to watch in Carson. Jefferson Alade and Jose Hernandez have been the one-two punch for the Whitecaps this postseason. Both have scored in every game so far and could be the key pieces for Whitecaps pulling off the upset.

How they got here: Texans SC Houston advanced to the semifinal as the only non-MLS academy to reach this stage this season. Texans went 3-0 in group play with wins over Montreal Impact, Sockers FC, and Sacramento Republic. A 2-0 overtime win over Real So Cal in the quarterfinal last week pushed Texans into the semifinals. Aleandro Alaniz scored the game-winner against Real So Cal and Alex Bruce added the insurance goal. The Colorado Rapids went 3-0 in Group F of the playoffs with wins over Capital Area Railhawks-CASL, Chicago Fire, and Baltimore Armour. In the quarterfinal, Rapids beat Orlando City 2-1 on the road in one of the biggest upsets of that round. Rhys De Sota netted the game-winner in the 88th minute in the quarterfinal victory.

Players to watch: Christian Cappis has been a star for Texans SC Houston during the run to the semifinal. The midfielder has been pulling the strings during this dream run for the Texas side. Sam Vines was a key player for Rapids in the quarterfinal and will likely be in the spotlight in Carson. Vines’ ability to create from the outside back position sets him apart from the crowd and gives Rapids a different dimension.

How they got here: LA Galaxy qualified for the playoffs during the last weekend of the regular season. Galaxy, the No. 32 seed entering the postseason, looked like the underdog from the start. Close wins over Sporting Kansas City and FC Boston Bolts helped LA Galaxy win Group B and advance to the quarterfinals. Galaxy went on the road and defeated RSL-AZ in a penalty kick shootout. Seattle Sounders went 2-1 in Group C, but advanced thanks to a better goal differential than New York Red Bulls. Shandon Hopeau’s two goals in the final group game against Beachside were a major reason why the Sounders made it out of the group. In the quarterfinal, Sounders defeated local rival Crossfire Premier 3-2. Paul Rothrock netted the game-winner in the 111th minute. It was his second goal of the game.

Players to watch: Sounders center back Samual Rogers recently signed a professional contract with Sounders 2. He has been involved in the postseason with the U18 squad, and looks to be a player to watch for the future with the franchise. LA Galaxy relied on some of the LA Galaxy II players to help advance from group play. However, youngster Efrain Alvarez is the most talented player of the bunch. Alvarez, 15 years old, scored the lone goal against RSL AZ in the quarterfinal. Goalkeeper Eric Lopez will also be a key player for Galaxy this weekend.