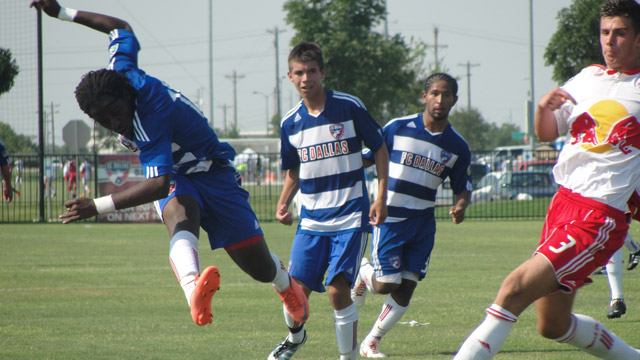 The USSF Development Academy’s 2011-12 season will end on July 23 in BBVA Stadium in Houston, Texas with the U18 title game. Over the past 10-months, 16 teams have stood above the rest to reach Finals Week – eight in each age group.

Here is a preview for the U18 age group, which faces some unique challenges with the absence of some players due to early move-in dates for collegiate athletes and U20 Men’s National Team Milk Cup call ups.

Despite being the lone Wild Card to make Finals Week, the North Carolina Fusion is not a team to overlook.

Fusion made Finals Week last year in the U16 age group with the core of this group. North Carolina ended up sixth at last year’s event with losses in the last two games.

Will that experience help the Fusion win Group 1?

How they got here: With a draw against FC Delco and a win over Shattuck-Saint Mary’s, Fusion needed a win against Crossfire in its final playoff game. Alec Rotunda delivered with the game winner in the 60th minute with a 1-0 victory.

The boss of the midfield demands the attention of the opposition at all times. He is crafty on the ball, but also smart with his runs. Marshall, a 2013 North Carolina verbal commit, tied for top honors in scoring this season with 12 goals. 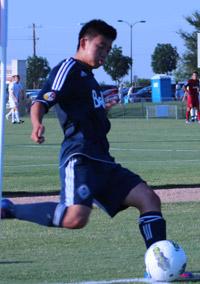 Vancouver is favored (by us) in
this group.

The Canadians are coming!

Controversially, the Vancouver Whitecaps were let into the Development Academy in 2011-12. The MLS Academy side has made its mark on the league since then with a storming run through the Northwest Division.

Even though this is its first appearance at Finals Week for the Caps, this team might be the favorites in the group with a very talented roster that plays an attractive blend of soccer.

However, leading scorer Caleb Clarke is out on loan and the Caps may need to find another consistent scorer to fill his void.

How the got here: After suffering a shocking defeat in the first game of the playoffs against the Pateadores (2-3), the Whitecaps bounced back with commanding wins over Weston FC (4-0) and Texans SC Houston (2-0).

While rarely called on during the season, Callum Irving, the goalkeeper, will need to be sound in Houston for the Whitecaps to have a shot at the big trophy.

De Anza Force is a perennial presence at Finals Week and this year will be no different. With a very organized and determined group, De Anza Force will be looking to do something in Houston that it couldn’t do twice during the regular season: beat Vancouver.

Force lost 3-2 in both meetings, but has a shot at redemption in the second group game, which could be the decider in this group.

How they got here: With a shocking comeback draw against CASL Chelsea FC (2-2) in the first game, Force’s week looked like it reached its emotional peak too early. But the experienced Northern California squad kept its composure and pulled off victories over LA Galaxy (1-0) and Vardar SC Freiburg (2-0) to win the group and spot at Finals Week.

Michael Amick, the center back, is the heart of the team. Amick’s kind nature is a façade on the field, and the 17-year-old is actually tough as nails when he laces up the boots.

The Rapids suffered through the heat and injuries in Frisco, but should have most of the regular starters back for Houston.

Among the U16 players playing up an age, Ricardo Perez was one of the standouts. The dynamic attacker opened up defenses with his darting runs at the outside backs. With Dillon Serna likely absent with the U20 MNT, Perez will need to take on the heavy lifting in Houston.

How they got here: The aforementioned Serna delivered the game-winning goal in the dying moments of the Rapids’ final game at the playoffs to secure a 2-1 result over the Dallas Texans and clinch a spot at Finals Week.

The Rapids expect O’Neill, the physically imposing recent Home Grown signing, to be fully fit for Finals Week (he only played one game during the playoffs due to an undisclosed injury suffered early in the second game). O’Neill is the anchor of the team in the center of the park, which allows others around him to be dangerous on the ball.

On paper, the Whitecaps look like the favorites. The team has hit stumbling blocks this season, but still looks like a formidable squad when it is sharp and ready to play. There is little separation between the other three, as each team possesses a difference maker who could decide this group if the ‘Caps slip out of the gate again.

Last season, FC Dallas went into Finals Week as the favorites, but lost, on national TV, in the title game to the Pateadores.

This season, FC Dallas is out for vengeance and has effectively steamrolled its way through the competition.

With an absurd plus 73 goal differential, FC Dallas has rarely been threatened this year. The incredibly talented roster that is chockfull of international caliber players is clearly the favorites of this group.

How they got here: Real Salt Lake AZ was the only team that kept it close with Dallas at playoffs, and even that game was not as close as the score indicates (1-0). Jose de la Tejera claimed the winner in that game, and FC Dallas cruised to a pair of 3-0 victories in its other group games.

The scuttlebutt is that both Jon Top and Daniel Garcia have declined call ups to the U20 MNT to play at Finals Week. With Top’s surprising availability, FC Dallas will have a consistent forward to rely when the chances become available. .  . and with this team, the opportunities in front of net will be readily available.

The Baby Goats are making their first appearance at Finals Week as a club, but the coaching staff has plenty of experience at this stage with assistant coach Mike Munoz leading RSL-AZ U16 to a third place finish last year.

Chivas USA is in for a battle in this group with a trio of other teams that play a similar style, but possess slightly better athletes across the board. Not to downplay the players on Chivas USA, but the Southern California squad will need to take the lion’s share of possession in each game to have a sporting chance in this Group of Death.

How they got here: Ben Spencer scored a tremendous game-tying goal against New York Red Bulls in the final game from Frisco and Chivas USA scraped into Finals Week.

Enabling Chivas USA to hold the both is its midfield maestro Marky Delgado. The tenacious central midfielder is one of the best distributors at this level. The season training with the first team has really paid off for Delgado, Ben Spencer, Jake McGuire, and Eric Gonzalez.

Head coach Kevin Smith and his staff should be a little upset that U.S. Soccer paired his group with FC Dallas once again. The two Texas teams have played three times already this season and the MLS Academy is a perfect 3-0-0 (10 goals for, 0 against).

Over those three games though, Solar missed some players and the squad for Finals Week is expected to be pretty close to fully intact as the Chelsea FC affiliate will faces it boogey monster for the fourth time in the last group game from Houston.

Although FC Dallas seems like the biggest obstacle, there are no easy games in this group and the opener against Baltimore Bays Chelsea should be a classic.

How they got here: Solar cruised through a group with a few difficult opponents including Chicago Fire. The passing for Solar was sharp in Frisco, and the opposition had trouble even taking the ball from the local favorites.

With shaggy dark hair, a laid back look, and a nickname like ‘Chachi’, Mathers looks like he walked off the set of ‘That ‘70s Show’ and onto a field accidentally. But, the midfielder is talented, very talented on the field.

He is especially dangerous on set piece opportunities, which is a massive plus in what is expected to be a very tight group.

While FC Dallas’ return trip to Finals Week seems to get more of the attention, Baltimore Bays Chelsea is back at this stage too. The Bays lost 1-0 against FC Dallas in the first game of group play in 2011 and ended up taking home fifth place at the event.

Despite the fifth place finish, the Bays were arguably the most enjoyable team to watch in Wisconsin last year. This season has been no different with a free flowing attack that leaves defenses saying prayers to try and stop the off-the-ball runs.

How they got here: Three wins in three games, the Bays were pushed a bit in the playoffs, but it never looked like their place in Finals Week was questioned.

Over the years, Michael Gamble, widely regarded as one of the top prospects to come out of the Baltimore area ever, has battled through a number of injuries. From his foot to his back, Gamble has seemingly always been a little dinged up.

Now, in his last Academy season, Gamble is chasing the object that has somehow eluded him, an Academy National Championship.

Group prediction: FC Dallas is on another level than most Development Academy clubs, and is the clear favorite of this difficult group. Bays will probably give Dallas the most difficult challenge in the second game, but the MLS Academy’s quality should see it through to another championship berth.