Dickey puts U15 GNT through training 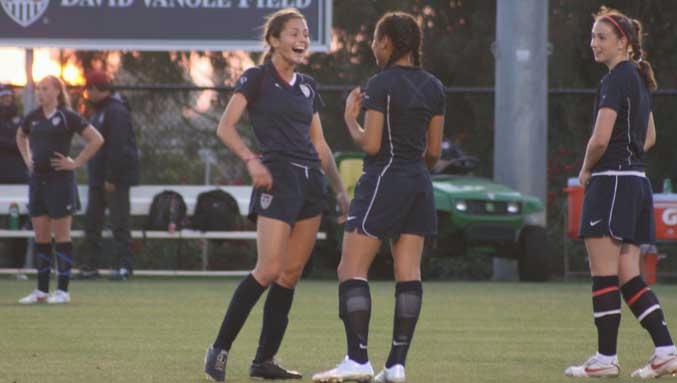 CHULA VISTA, CALIFORNIA – It was a teaching session taking place here Monday at the Olympic Training Center as Mike Dickey conducted training for the U15 Girls National Team, in camp this week.

Dickey, who at least for now is serving double duty with the U17 Girls National Team, is directing the U15s (mostly 1995 birth year players) in a weeklong camp complete with a series of practice matches at the facility nestled within a few miles of the Mexican border in San Diego County.

Regardless of what US Soccer decides in terms of coaching personnel for its girls youth national teams, Dickey knows this group will be integral to the next FIFA U17 World Cup cycle. The current cycle was shocked earlier this spring at the CONCACAF Qualifying Tournament and will not compete in this summer’s World Cup in Trinidad after falling on penalties to Canada in the semifinal at Costa Rica. 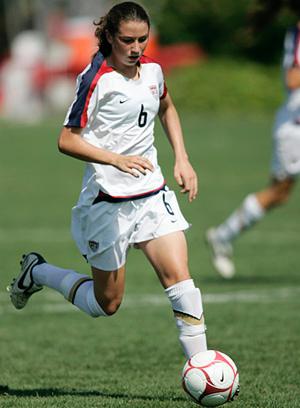 Morgan Andrews
Moving on, Dickey, a Louisville-based US Soccer staff coach who was an assistant with the current U17 squad, was stopping and starting an intrasquad scrimmage Monday, pointing out player responsibilities in a 4-4-2 system.

“The idea is they are our next U17 cycle, so it’s a building block for the 2012 World Cup. The first idea was to come up with some of the better players that we’ve seen across the country and continually build upon that,” Dickey said. “We want to teach them how to play in some different situations. The last time we played in a 4-3-3 because for one reason we had a lot of forwards and not a lot of defenders. But we also thought that was important because it’s something they might have to play down the road in a World Cup. This time we’re playing a 4-4-2. Again it’s personnel based, but it’s something we may have to play when they get into world cup qualifying and a world cup.”

Dickey also aims to supplement the individual skills being developed for each player at the club level.

We’ve also spent a lot of time reinforcing technique – technique under pressure, how to use technique in certain parts of the field whether it be attacking midfield or center midfield, wide midfield, center back, outside back,” Dickey said. “These kids are coming from their club settings where they’ve all played different spots and so we’re putting them here and putting them there where we think they can be successful at the international level if they can make this team – and starting to give them some ideas about how to play in those places.”

The 24-player roster includes some familiar faces to youth national team watchers, including a few who were with the previous cycle’s version of the U15 GNT, including Stars of Massachusetts standout Morgan Andrews, CASL Spartan Elite midfielder Joanna Boyles, So Cal Blues forward Amber Munerlyn and Michigan Hawks’ midfielder Summer Green.

Dickey expects such players to take a leadership role in the cycle. 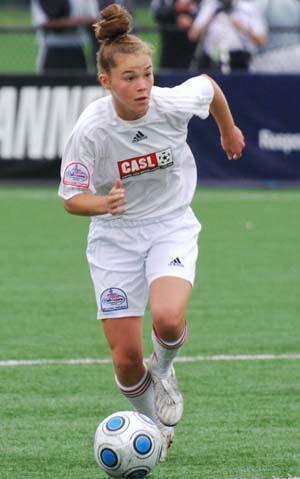 Joana Boyles
“They are more experienced. They’ve been in with older players and I expect them to do some things at a higher level and take a leadership role and lead by example,” he said. “Also I expect them to communicate some ideas to the others, because if we go on the road for a week or four weeks there will be a lot of leadership needed on those players’ parts. You’re seeing some maturity on the part of those players.”

During the scrimmage Monday, these players stood out, with Munerlyn in particular showing other-worldly acceleration in the forward third, including one run where she scored an excellent goal by blowing by the defense. Naperville Fury forward Zoe Swift also scored a nice goal on a breakaway. Other players who caught my eye in an unscientific survey were Team Boca (Florida) defender Miranda Freeman, Seacoast United midfielder Lydia Simmons and North Atlanta SA goalkeeper Jane Campbell.

Dickey is high on the group overall.

“There are some really terrific players and we’ve got some new kids where it’s there first time in an international situation. We’re taking a close look at them to see how they respond and perform and come together,” he said. “It’s important they learn how to perform as a national team player. We’re at an Olympic traning site and it’s great to be among other world-class athletes not specific to soccer to see how they operate here as well. But there’s a chance a bunch of kids could do that (play in the World Cup) provided they keep getting better. We did some skill testing yesterday to measure where they are at from the last camp and we’ve seen some improvement. We’ve also seen some improvement in their play. I saw some things on our first day and usually our first day is a little bit shaky, but this first day I thought was an exception. Some of the stuff we did was hard and they were able to do it, so I was pretty happy with that.”


U15 GNT Roster (Courtesy US Soccer)