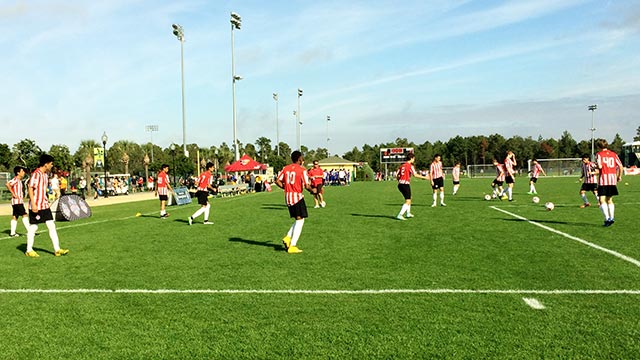 The Disney Soccer Showcase at ESPN’s Wide World of Sports is two days gone. The men’s groups played day two in the hot Florida heat, and while it helped the hometown kids, it seemed to bog down players from cooler areas.

United FA showed Baltimore Celtic why they’re the No. 1 ranked team in the Grande Sports Academy Team Rank Top 25 as they defeated them 1-0. It was Baltimore’s goalkeeper Quantrell Jones who made it such a close game, though. Jones had a showing of his own; he showed why he suited up for the U.S. U14 Boys National Team.

“He [Jones] had a great game. That’s the reason he’s on the National team,” said Jose Marcelo Pinho, head coach of United FA. “We created opportunities. We knew it was going to be hard to score … It’s very hard to score on him.”

United found it very difficult to put the ball past Jones. They only managed to tally one goal against the No. 10 U15 team in the nation. Although, it was mostly United on the offensive tear. Baltimore managed only a few quality scoring chances, and only one came in the first half.

United had the first few chances of the match, including a shot from deep in the box by Saul Tinoco, free kick from the foot of Eric Garcia from just beyond the box, header from the foot of Alonzo Millsap that connected with Tinoco and another header, this time from Carlos Reyes, but all four were stopped by Jones.

In the 49th minute, United finally found space between Jones and the pipes. Zachary Ernst crossed the ball into the middle of the field to Dalton Seckinger who one-timed it into bottom left with a right foot.

In the final few chances of the game, Baltimore’s Juver Navarrete almost tied the match in the 53rd minute, but sailed a blazing shot just high of the net. Out of very few chances Baltimore had in the early morning match they would get another in the 59th minute. Ian Reger started the play with a pass up field to George Nichols. Nichols got the ball to Aidan Welsh, who dribbled in deep but couldn’t sneak it by the diving United keeper, Niko Tzevelekos.

Dix Hills had three chances off the foot of Taylor Kaczynski to start the match, but Sunrise’s keeper, Daniel Ragoo, made all but one save. In the 22nd minute, it was Benjamin Prince who made a sliding play to keep a ball from rolling past the goal line on the first ball that got by Ragoo.

Prince’s perfect play propelled the Sunrise offense during the next five minutes. It started in the 23rd minute with a shot from the foot of Donald Emerson. Taylor Willman received the rebound and made no mistake when he put it in the back of the net. Two minutes later, it was Frederick Gil with a free kick that dinged the crossbar. In the 28th minute, Willman laid a perfect pass over the shoulder of Emerson, who beat the only defender and knocked the ball into the bottom left with a left foot.

Dix Hills showed fight shortly out of the gate in the second half, though. Joseph Destefano headed a corner kick across the box in the 58th minute. Everyone scrambled for the ball in the box, but it was Kyle Honor who picked up the tap in tally for Dix Hills to make it a 2-1 game.

The rest of the game was all Sunrise. They tallied markers in the 76th minute on a head ball by Emerson for his second of the game. In the 83rd minute, Gil was sent on a run by Willman, and was tackled in the box. The foul resulted in a penalty kick for Gil, who found the low left side of the net as the keeper dove right.

All Boca needed was an early score on a penalty kick to earn the win. They got the early tally and the rest of the game was a battle at midfield in between whistles.

“They made us stretch every minute. Super good team,” said Keith Fries, head coach of Team Boca. “It’s a win you like to get.”

Boca opened the game with a penalty kick in the ninth minute. Harrison Fuster was tackled hard in the box, the team decided to let Mark Faeth take the PK on the ensuing foul. Faeth pulled a stutter-step before he put the ball in the back right of the net with a right foot as the Bayside’s keeper, Anthony Billeri, dove to the left.

The rest of the game was filled with whistles as the game of cards came to a close. The referee whistled every questionable play in the U17 match, and each team received four cards. Boca had four yellows while Bayside had three yellows and a red.

Esrli Giron had the majority of chances for Bayside, including a settled chest ball he got on net with a bicycle kick in the 33rd minute. It was Andrew Medeiros, Ahmad El-Asmar and Alexander Do Rego that stopped Boca from scoring in the back field, though.

Boca’s Kelvin Aalo, Edgar Ayala and Joshua Adejunmobi stopped the opposing scorers throughout the match as well. Although, Boca was put on the tips of their toes in the 84th minute when Bayside’s Victor Rey was tackled in the box by Fuster, and was awarded a penalty kick. Rey missed the chance wide right with a right foot, and that sealed the game for Boca.

After Florida Kraze won their first match 5-0, they struggled to find their footing until late in the game. FC United stuck with five defenders against the Kraze, and it worked well for them.

“We had a few chances in the first half, but just didn’t time our runs,” said Joseph Avallone, head coach of Florida Kraze. “We talked at halftime about some things we needed to do.”

Florida Kraze had two quality chances in the first half, but missed both wide right. The first miss was off the foot of Anotonio Arocho in the 14th minute and the second miss was from Dylan Chopra in the 18th minute.

In the 40th minute, FC United got one of their best chances of the game. It came off the head of Caleb Couselman on a cross field feed from Dustin Bosch. Their other premier chance came four minutes later when Christopher Beck put a left footed ball toward the net from the goal line. The ball hit the crossbar and rolled all the way across the bar until it made its way out of bounds at the other side of the net.

Charles Coleman created an opportunity for Florida off of a free kick. He got the ball to Nicolas Macaluso, but his shot was knocked out of danger by FC United’s defenseman, Austin Miller.

Florida finally tallied its only marker in the 71st minute. Nocholas Hinds sent a laser beam shot from just outside that box that found the fingertips of the keeper. The save caused a corner kick which was taken by Brandon Jose. Jose put the ball on target and William Coleman was in position to put the ball in the back of the net.