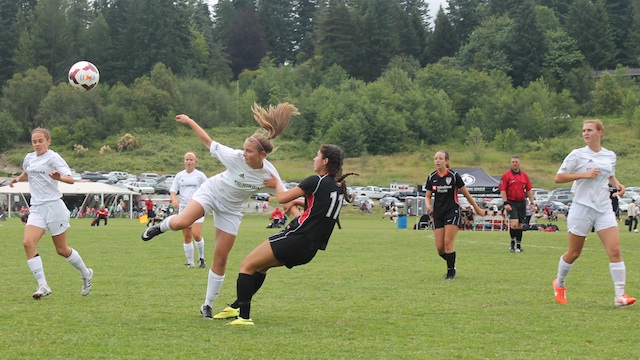 REDMOND, Washington — One of the best players in Seattle slung her team onto her back Thursday and carried them to three points. Thursday was some way to start the playoffs for Rachael Dorwart and the Penn Fusion U15 team.

Dorwart scored a pair of goals to guide Penn Fusion to a week-opening 2-0 win over Mustang SC on a cool, overcast summer day at Sixty Acres Park. Thursday marked the first day of competition for U15, U16 and U17 teams, who started two days after the U14 and U18 sides began national championship group play on Tuesday. For the middle three age divisions, Seattle is only a stepping stone to next month’s national finals in Richmond, Virginia. And at least for the Penn Fusion U15s, it was a sturdy stone.

Last month, Dorwart was named the No. 1 recruit in TopDrawerSoccer.com’s class of 2018 rankings after a prodigious 20-plus goal season playing up with primarily 2017s on the Penn Fusion U15 side. As a creative attacking midfielder, Dorwart’s uncanny finishing ability makes her arguably the most dangerous U15 player in Seattle. And she proved it again on Thursday with two silky goals.

“Rachael is just a dynamic, special player,” Penn Fusion coach Craig Scangerella said. “She draws a lot of attention towards her, which allows other players to free up and get involved. And her footwork is really just out of this world at times. Behind her, Kailee Coonan, she gives her that security blanket that she can go and do that, so that helps her a lot too. They work together very well.”

They certainly did on Thursday. With Dorwart straying high and Coonan hanging back, Penn Fusion weathered two early Mustang goal scares. Mustang flubbed an indirect free kick from six yards when the keeper handled a back pass about two minutes into the game, and Kira Noel Debro smacked the crossbar with a volley not long after.

From there, though, Penn Fusion settled in, and the rest of the meaningful passages were primarily on their side. Dorwart got the opener 25 minutes in when the keeper lost the handle on a 50-50 ball and Dorwart poked home the rebound. She added the capper later in the second half by cutting a tight angle and sneaking the ball inside the near post. The win gave Penn Fusion a leg up on its chase to make the finals. Two wins and a draw will do it.

“It’s vital. It just puts you on a positive foot going forward,” Scangerella said. “Now you’re not chasing results. Now the rest of the week is in perspective.”

Few U16 teams enter the postseason with as much expectation as FC Virginia. No team scored more than FCV’s 50 goals in the regular season, and only teams in the Southwest Conference - who played six more games - matched their 43 points entering Seattle. So there were some nervy moments during FCV’s cautious and uncertain opening to the week against Strikers FC, a Southwest Conference wild card.

Darcy Weiser, the newest member of the team, changed that with a thunderclap just before halftime. With the game scoreless, Weiser skipped past a challenge and finished high and to her right to allow the team to head into halftime with more sure footing. But it didn’t alter Strikers’ quality. FCV struggled to break down Strikers’ sturdy back line, which stood up to wave after wave of attack. The teams entered the final 15 minutes separated by just one goal.

But Strikers couldn’t hold out any longer. With about 10 minutes left in the match, Emily Fox made her quality tell by slicing in a beautiful curling ball that crept into the far corner to double the lead. The dam fully cleaved in half, Julia Phillips finished it off with a header off a corner five minutes later.

FCV will have aspirations of not only getting through Seattle, but also winning a U16 national title in their home state next month. They’re off to a speedy start in that regard.

Depending on the measurement you use, Dallas Sting might come out atop your power rankings for the nation’s top U17 girls club squads. Fresh off a Texas Conference championship, the Sting are the top overall seed for U17 sides in the postseason, and they opened up against a Penn Fusion side that qualified as the 26th of 32 teams.

And yet the Sting, with all their attacking prowess and defensive mettle, suddenly found themselves on the brink just five minutes into their postseason odyssey.

Penn Fusion jumped all over Dallas out of the gate, and when a Deirdre Bradley header smacked off the crossbar, Haleigh Echard was there to head back in the rebound for a surprising 1-0 edge nearly as soon as the game started. Rocked back on its heels, the stunned Sting were suddenly searching frantically for a response to a goal that could’ve had enormous implications.

The Sting soon proved it did not. Ten minutes after conceding first, the Sting got back on level terms when Blair Thorpe scored in nearly the exact same manner Penn Fusion did earlier. Sting slowly began taking control from there, turning possession in its favor until, by the midway point in the second half, the Fusion hardly had a touch on the ball. The second came 24 minutes into the first half when Kaycie Tillman finished in a scrum.

The Sting polished off the game in the second half. Midfielder Jordan Harr turned one in about 15 minutes into the second half, and leading scorer Mimi Asom found the net off a picture perfect Taylor Cobb assist just seconds later. After an early setback, the Sting’s train to finals is back on the tracks.