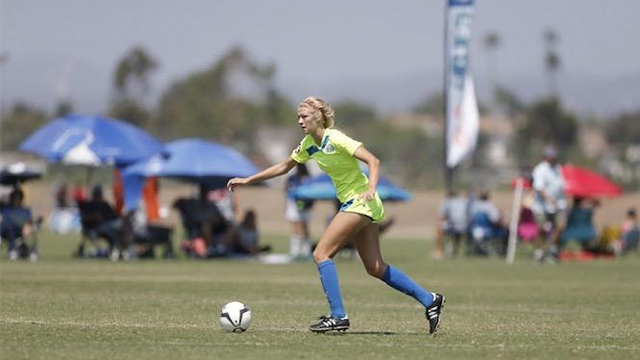 It is with great honor and pride that we can announce the ECNL All-America Team, as well as ECNL Player of the Year for the 2018-2019 season. Each of these athletes has made extreme sacrifices to put themselves in the position they are in today, whether it was sacrificing time with friends and family, or their bodies on the pitch. These #AmazingYoungWomen are a representation of what it takes to become the best that you can be.

Overall, thirty players were selected to the ECNL All-America Team by the All-America Committee. The committee includes technical representatives from each of the eight ECNL conferences located across the country.

Greg Baker — head coach of Whieldon’s So Cal Blues U18/U19 team — said, “Marin Whieldon is the epitome of work rate. She has an engine that never quits and she has an incessant drive to win. She will put in the time to do the skill work, the dirty work, or the goal-scoring, that her team needs. Marin does whatever it takes to be the best. She is very deserving of this prestigious award.”

Congratulations to these selected athletes on their impressive achievements throughout the 2018-2019 season. The ECNL would like to thank each and every one of you for helping raise the game this past season and for exemplifying what it means to have #NoCeiling.