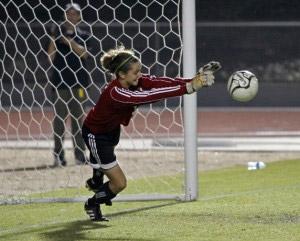 Emily Rusk (Photo by Scott Sharpe/Raleigh News & Observer)
For starters, she was named to the All-Event Team which speaks to her performance during the three-game event.

Rusk, a U17 goalkeeper, was honored alongside Charlotte Soccer Academy teammates Hannah Robinson and Katherine Bach as her team finished the competition with a perfect record of 3-0.

Just what her squad needed.

“Going into the tournament my team was ranked at the bottom of the A division and these wins pushed us up to a more secure position,” said Rusk, who credited her defense for a successful run of matches. “It's awesome to make these All-Event teams. The competition is tough and soccer is such a big part of my life, it's really cool to get recognition after such a high level tournament.”

SC Del Sol U15 players Emily McShane and Mary Claire Danilevics made the All-Event squad as their team went 2-0-1 for the weekend.

CASL and CESA had two of the stronger showings on the U16 side with both teams finishing at 2-0-1. CASL’s Sydney Curtis and Cameron Castleberry were honored for their performances as well as CESA’s Chelsea Drennan.

In U18 action, Lonestar SC also finished with a 3-0 record and midfielder Sharis Lachappelle earned her spot on the All-Event Team.

The final event of the 2010-11 ECNL regular season, the ECNL PDA College Showcase, will take place May 28-30 in Zarepheth, New Jersey.