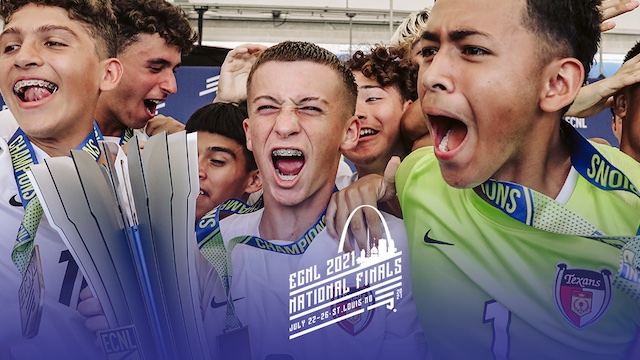 Following the success of the first-ever ECNL Boys Postseason, which saw the league crown its inaugural National Champions for all age groups U13-U18/19, as well as the first-ever Overall Club Champion, the league announced today an expansion to the National Playoffs and National Finals, which will see an additional 80-plus teams competing for hardware during the 2021-22 season.

“Our first-ever National Playoffs and National Finals were a tremendous success,” said ECNL Boys Commissioner Jason Kutney. “More than 250 teams across all age groups participated in the postseason with an extremely high-competitive standard on display for more than 450 scouts from the professional and collegiate levels. Because of that success, and due to the incredible growth of ECNL Boys this offseason, we are increasing the number of teams competing in the postseason at the U13, U14 and U18/19 levels in an effort to provide more opportunity in this unparalleled atmosphere and environment for youth soccer’s top performers.”

For the 2021-22 season, the U13 age group will expand from 16 teams to 48 teams, moving from a single-elimination one-stage competition bracket to a group format and two-stage competition. The 48 teams will be placed into 12 groups of four teams each at the ECNL Boys Playoffs. Each group winner, along with the top four second-place teams, will advance to a 16-team, single-elimination knockout round, with the eight winners advancing to the ECNL National Finals.

At the U14 age group, the new postseason structure will see 64 teams competing in a two-stage competition. The group stage will feature 16 groups of four teams, with each group winner advancing to the knockout stage. The knockout round will then consist of a 16-team single-elimination bracket, with the top eight clubs moving on to the ECNL National Finals.

At the U18/19 level, the top 16 teams in the country will compete in a single-elimination Champions League bracket to determine the National Champion, in the same format as last season. However, to provide more opportunity for this age group in 2021-2022, the league will be introducing the U18/19 North American Cup for the next-best 16 teams to compete in a single-elimination bracket for the trophy.

“One of the key ingredients of the ECNL has always been communication with the club directors and such is the case here,” Kutney said. “There was a strong desire for more postseason opportunities across more teams and this is an important step in that direction. By providing more postseason opportunities, the added playoff races and increased high-level contests will continue to raise the level of competition within the league and continue to push the game forward for our athletes.”