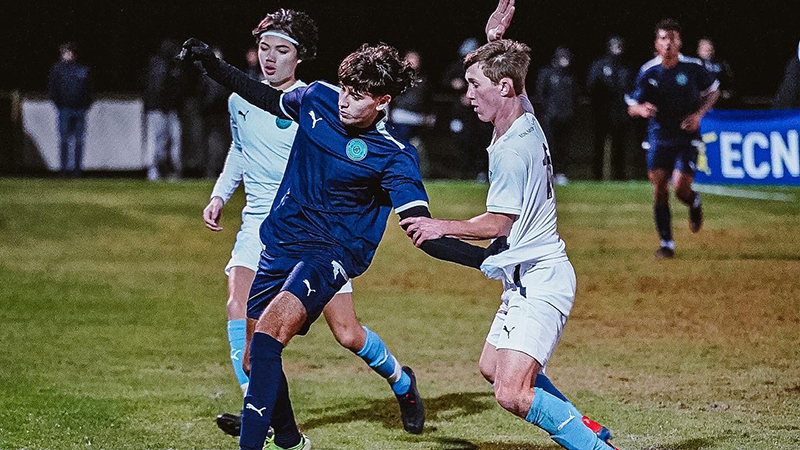 Once again, the ECNL National Selection Game did not disappoint.

The third installment of the National Selection Game took place at ECNL Florida – Club Saturday night, with thousands of college coaches, teammates and other spectators in attendance, and the contest was exciting from the opening whistle.

Right off the bat, it was clear the teams would waste no time trying to feel each other out and instead would attack as fully as possible. Within the first 10 minutes, both Team East and Team West had quality scoring chances, putting pressure on defenses that just met each other. And while both sides had their chances, it appeared Team East was going to take the game’s first lead.

In the 12th minute, Team West committed a foul in the box, and up stepped Santiago Castaneda (Florida Premier FC) to take the penalty kick. He rocketed a shot that appeared destined for the back of the net, but it rose just too much and clanked off the post. He unfortunately then touched the ensuing rebound before any other playing, blowing the play dead.

“I was very confident before the shot,” Castaneda said. “I think I went for too much power and hit the crossbar. It came right back to me, but obviously, according to rules, that’s not how it goes. I had to just move on with the game and hope I’d get another chance.”

mediately after the missed PK, Team West raced down the pitch, getting a fantastic look on a back-post play, but the shot just missed, nearly sending the crowd into a frenzy.

As the half wore on, the two squads continued to play a physical brand of soccer, testing their opponent and daring them to play through them to earn that elusive first goal. But through the first 45 minutes, the goaltenders and defense held the offense in check just enough to head into the break tied 0-0.

“I wanted to score the first time I got the ball,” Hakim Karamoko (Manhattan SC) said. “But I missed my chances. My coach then moved me back to the 10, which I had never played before. But it was fun and that’s where I finished the game.”

After controlling most of the first half, Team East was on its heels for the second, as Team West came out and applied pressure immediately to the boys in blue. They traded chances back and forth, with the Team East goalkeeper making numerous diving saves and the Team West netminder being peppered with close-range shots.

As the clock wound down, Team West earned more and more looks. From corner kicks to free kicks well within range, Team West routinely and consistently put balls on net, but each time, the shot went just wide or was well saved. Meanwhile, Team East looked for its counterattacks, eventually earning a few scoring chances of its own, including one in the final minutes of the match.

Those chances included Karamoko getting a free kick 20 yards out with just minutes left, but he put his shot into the chest of the goalkeeper. Meanwhile, on the other end of the pitch, Team East put the ball inside the six-yard box, where it bounced between defenders and attackers before eventually it was cleared off the goal line and out of danger.

“I wanted to get a goal,” Karamoko said. “But I just hit it a bit low. But that’s how it goes sometimes. Whatever’s meant to be is what is going to happen.”

Thank you to the thousands of fans, 200+ scouts, our NSG staff, and all of the athletes who participated and continue to make this game something you DO NOT want to miss. #ECNLFL #ECNLNSG pic.twitter.com/znfqkZqmta

Ninety minutes proved to not be enough, and for the second consecutive National Selection Game, the contest went to penalty kicks.

Each of Team East and Team West’s missed their first penalty kicks, but Team East got on the board first, followed by another miss by Team West. The two teams then traded goals in the third and fourth rounds. Leading 3-2, Kenny Delson Kwizera stepped up to the spot. He ripped his shot and hit the back of the net.

The National Selection Game pits the best in the game against each other, and that was fully on display at ECNL Florida – Club Competition. The game featured an incredible pace, beautiful shots, intense tackles and so much more. And once again, the players rose to the occasion, sending all of those in attendance home with memories from an incredible game.

It is most definitely a game no one on the field will soon forget.

“Growing up, I’ve always played ECNL,” Castaneda said. “It’s always just been an intense league full of great players. I love it. It was great to play here tonight and I’m excited to suit up for my club the rest of the weekend.”

“Tonight was a great experience,” Karamoko said. “This is my first year playing in ECNL and this was my first National Selection Game. Like the league says, we’re just all trying to always be more. That’s what I’m going to take from tonight.”