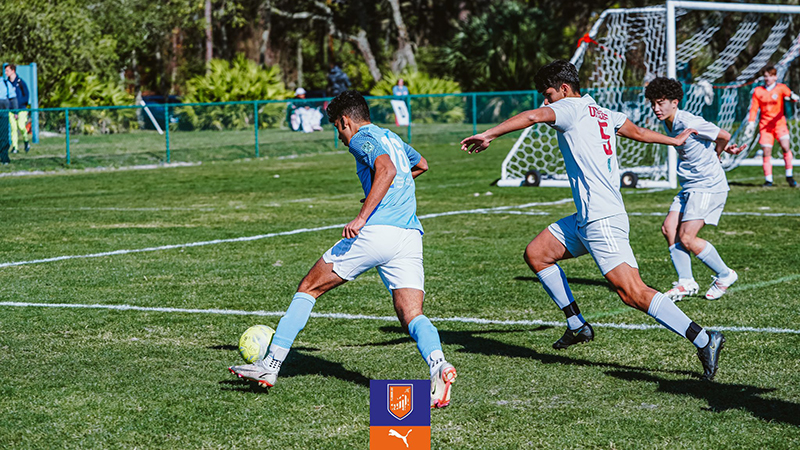 On Day 2 of ECNL Florida – Club Competition, United Futbol Academy faced off against Match Fit Academy in the U17 age group in an East Coast showdown. Heading into the game, UFA leads the Southeast Conference with a 19-2-2 record, while Match Fit Academy comes to ECNL Florida for its first action of the season.

The game opened up with Match Fit Academy getting the better of the play, generating scoring chances right from the opening whistle. Gabriel Nickerson said those first 10 minutes were tough for UFA, but necessary for setting the tone for the rest of the match.

“I think it started with the warm-ups,” Nickerson said. “I think we came in a little bit lackadaisical. After a few fouls early, we knew it was time to get it together. It was time to wake up.”

After weathering the Match Fit attack, UFA was able to counter and get numbers forward, which resulted in a foul in the box, setting up a penalty kick. Tomas McCurry earned the chance to convert and he made no mistake, burying his shot to give UFA a 1-0 lead.

The penalty kick breathed life into UFA and allowed them to fully get their heads into the contest. Coming off the restart, UFA searched to double its lead, testing the Match Fit backline. But as the half progressed, Match Fit slowly started to claw its way back into the contest, closing out the half with a flurry of chances, but UFA stood strong and took the 1-0 lead into the half.

After one particular attack early in the second half, UFA stopped a Match Fit scoring chance and raced upfield on a counter, leading to a foul 30 yards out from the net. A seemingly inconspicuous free-kick turned out to be anything but, as Nickerson slipped a shot around the wall and into the back of the net, doubling UFA’s lead to 2-0.

“I go through shots like those in training,” Nickerson said. “Although they’re usually from closer range, and I usually try to pin them to the back post. But lately, the keepers have been sitting on that back post positioning their wall. I walked through my steps and I just realized I’m a little bit too far back. And then I saw him on the back post and I wanted to get it around the wall. He’s a big keeper, very skilled, and so I thought if I could go low, I maybe would have a chance. So I re-did my steps, didn’t pull it and I put it around the wall low and it went in.”

Holding a 2-0 lead, UFA refused to sit back and let Match Fit control the rest of the game. The Georgia-based club continued to send numbers forward, looking to keep scoring goals. Through set pieces and corners, UFA had their looks, but Match Fit’s netminder Stephen Deak kept the ball out of the net.

As the minutes ticked off the clock, Match Fit rededicated itself to chipping away at UFA’s lead and got plenty of good looks in the final minutes of the contest. However, Johnson stayed strong and earned himself a big shutout at the final whistle.

“It was a really good, competitive game,” Nickerson said. “We knew they were going to be a very good team. It was the Featured Match of the Day, so you know that they were going to come out and just try and beat us. It was really a two-way game and I was really excited because it was great competition. I’m glad my team and I had enough tenacity to keep on going through the game and get a good result.”

The 2-0 win, along with a 2-1 win against NEFC Saturday, sets up a game against Florida West Monday with a chance for UFA to end the weekend a perfect 3-0-0.