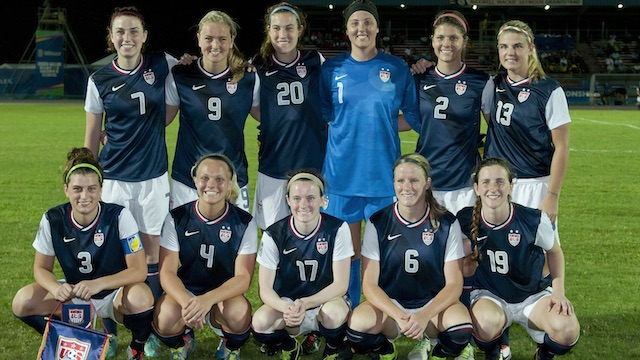 Whether or not the U.S. Women’s National Team is the favorite to win the fast approaching Women’s World Cup in Canada, it’s certainly on the shortlist. Led by international superstars Abby Wambach, Alex Morgan and Sydney Leroux, it’s impossible to ignore the latent talent on this team. Winning a first Women’s World Cup since 1999 is a big goal, but it’s also an eminently achievable one.

But there’s a common thread running through this team that will almost assuredly be prevalent for the last time in history. This entire 23-player roster was reared through a developmental formula that had existed since the Women’s World Cup had its beginning in 1991. That is, under the provincial auspices of high school soccer and local clubs.

After this Women’s World Cup, things will never be quite the same again for the full women’s national team. The ECNL era will begin in earnest.

Since its foundation in 2009, the ECNL has exerted an increasingly large influence on U.S. Soccer’s youth national team system. Only recently, the snowball’s become a bourgeoning avalanche. At last year’s 2014 U20 Women’s World Cup, 18 of the U.S.’s 21 players had direct ties to ECNL clubs. Similar influence has stamped itself on every tier. At a U14 GNT camp last November, 28 of the 35 players called in were ECNL players. Earlier this year, a January U15 camp (19 of 24), a February U16 camp (20 of 24) and a February U17 invitational (16 of 21) were brimming with the league’s products.

That influence hasn’t made it to the full national team just yet, but that’s primarily because the league hasn’t been around long. During the 2009-2010 season, its first, the league added U15, U16 and U17 leagues in “limited scope,” broadened the scope the next year and then added its full complement of programming with U14 and U18 leagues for the 2011-2012 season.

So while the first players who traveled through its entire spate of leagues, from U14 all the way through U18, won’t be of college graduation age until the 2019-2020 season, the league is already close to producing its first batch of professionals. In fact, Morgan Brian became the first ECNL-connected player to make a Women’s World Cup roster this year, even though her experience was in the non-developmental U23 league. As the years stretch on, it’s merely a matter of when, not if, ECNL-developed players headline future Women’s World Cups.

These are heady days for the ECNL, which is likely watching the last U.S. team in a Women’s World Cup without serious participation from its growing list of alumni.

“I think it’s an exciting time for women’s soccer in general, and ECNL plays an important role on the development side of things,” ECNL commissioner Sarah Kate Noftsinger said. “We can’t write the future, but we can try to predict it. With the ECNL players, you’re seeing more and more they’re getting called into the youth national teams. On the full national team level I think you’ll see that impact.”

What that looks like down the line is anyone’s guess. The ECNL is full of upwards of 80 programs with varying coaching techniques and approaches, and heralding a single style of player from the ECNL is all but impossible. But the fact that the U.S. has struggled to cross the finish line at World Cups over the last 16 years was part of the clarion call heeded by the ECNL, which saw it as a mission to produce a higher class of player in more volume than ever before. In a world previously filled with localized high school and club development systems, the ECNL quickly became the largest and most comprehensive girls league apparatus ever.

Inevitably, that’s filtered into the women’s youth national team system. Real Colorado star Mallory Pugh, who’s just a high school junior, will be 21 years old during the next Women’s World Cup in 2019. Striker Lindsey Horan, who emerged from the Colorado Rush system, will be 25. Defender Cari Roccaro? 24. And midfield string-puller Rose Lavelle will be 23. All of these players are next generation talents reared in some way by the ECNL, and all four - along with a number of teammates - started at last year’s U20 Women’s World Cup.

The next cycle presents an interesting opportunity for the ECNL’s growing (and maturing) stable of players. Of the 20 outfield players suiting up for the U.S. in Canada this summer, nine - nearly half - will be north of 30 by the time the tournament ends. That includes key pieces like Carli Lloyd and Abby Wambach, both of whom are probably playing their last World Cups as anything approaching centerpiece players. Roster spots will be hard to earn, as they have always been, but the stampede of players raised under the banner of the ECNL is coming.

It will take some time for the ECNL to stamp a deeper imprint on the national team scene, but the organization is  doing its best to promote a fluid style in concert with U.S. Soccer leadership, starting with senior team coach Jill Ellis at the top.

“I think you’re seeing a more confident, complete player developing,” Noftsinger said. “These players from a young age now are playing in the most competitive environment there is. It’s almost like your muscle reactions to things. You can train the mind to get used to those moments, and on a big stage they’re having those at a younger age. And that’s really good for them, so that when they are playing in a World Cup final, it’s our hope they’re prepared for it.”

The ECNL is independent of U.S. Soccer as a league, but Noftsinger says the relationship the two organizations have forged over the years has led to a smooth transition between the two for players down the line. Indeed, as recently as nine months ago Ellis herself was at an ECNL event scouting players.

“(U.S. Soccer) has hired some of these developmental coaches across the country now that we work with on scouting and have close relationships with the coaches,” Noftsinger said. “That’s so essentially the coaches in the ECNL, they’re the ones seeing the players day in and day out, and they’re just an extension of what’s going on in a national team environment.”

The two are so integrated, in fact, that if a player returns from a national team camp with constructive feedback about her game in tow, that’s often relayed to her club coach and integrated into his game plan.

“In the six years the ECNL has been around, that relationship with the federation has become stronger and stronger, and it’s very collaborative,” Noftsinger said. “Because at the end of the day, we’re not the federation, but we are here to support them and help them be the best in the world.”