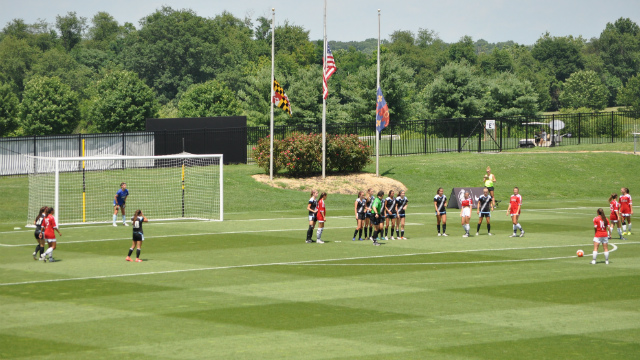 BOYDS, Md. — The final games of the 2015-16 season wrapped up with a high-scoring U15 finale, and a pair of dramatic finishes that included goals in extra time.

Here’s how the three teams earned their titles on Saturday.

U15: Slammers 4-1 FC Stars of Massachusetts

While the game was closer than the final score might suggest, Slammers FC’s team won a second straight national championship with this squad with a breakout offensive performance.

FC Stars goalkeeper Bethany Dunk kept Slammers at bay with a couple of early sharp saves, and it would take a special effort to open the scoring.

Natalie Hueston took possession of the ball in midfield, starting a mazy run that beat one, two and then a third FC Stars defender. Seeing just enough space at Dunk’s far post, she finished with aplomb to put the California side out in front.

The goal titled play in favor of Slammers, as Jenna Nighswonger looked dangerous just about any time she touched the ball. FC Stars’ attack, led by Alexandra Panaggio, Halle McCabe and Payton Linnehan sought to tie the game, but it ended with Slammers up a goal at the half.

After the break, Slammers started to pull away. Nighswonger won a penalty, finishing it herself to double the lead. An impressive cut back, dribble and finish by Genevieve Watkins made it a 3-0 lead.

FC Stars had a glimmer of home when Panaggio converted a penalty kick. But the Slammers would add a third from a set piece when Jesse Loren headed home a Nighswonger corner kick to clinch the title.

With seconds left off the clock in the second half of extra time, penalty kicks seemed inevitable between PDA and Real Colorado.

Just when it looked like it was going to finish 0-0, Kayla Lee popped up at the far post to tap in a deflected shot that somehow squirted out of a cluster of PDA and Real Colorado bodies packed into the left side of the box.

Lee popped up at the right place at the right time to cue the celebrations of another title heading to North Jersey.

Leading up to the goal, neither side created very many clear cut chances. Lee and Amelia Paternoster looked for gaps in behind the defense, though Real Colorado looked prepared for that threat, cutting out passes and breaking up play before anyone could break free.

Real Colorado’s Abby Kassal offered a threat from distance, and had a number of decent looks on goal, including one that she fired just wide in the second half. Lacking U.S. youth national team players Jaelin Howell and Sophia Smith, Real Colorado slowly but surely took control of the game as it progressed.

However, PDA held firm, setting the stage for the late drama to edge the encounter.

Both teams took the field less than 24 hours after lightning delays pushed back the U17 semifinals, leading to a plodding, tired affair between the Hawks and Force.

Drama took the forefront once again when Catherine Dager beat the offside trap, latching onto a driven long ball from one of the Michigan center backs. De Anza’s goalkeeper stopped Dager’s initial effort, but she followed up to slot home and put the Hawks on top in extra time.

A fascinating tactical battle between De Anza’s whirring possession machine and Michigan’s effective counter attacking, the fatigue certainly left its mark on both sides. Michigan’s attackers Alexxis Lipsey and Grace Krygler looked to take advantage of opening on the break, with Lipsey coming close on more than one occasion during the first 90 minutes.

Golden chances were few and far between. Michigan’s Sarah Clark fired a dangerous free kick into the wall. Luca Deza got on the end of a Samantha Tran cut back, only to spurn it high of the goal in the second half, in what turned out to be one of De Anza’s best chances of the game.

As the game progressed, Deza looked the most likely to create for the Force, though Michigan’s impressive back line was consistently up to the task. Abby Willerer led the effort from central defense, with Jaimie Leas solid and steady in goal.

In the end, Dager’s effort proved to be enough, as the Hawks held on over the final 10 minutes of extra time to kick off the celebrations.

.@HawksWolves 1-0 in the 1st OT. The keeper saved the first shot of the breakaway, but then this... #ECNLFinals pic.twitter.com/K6ldjCHei5