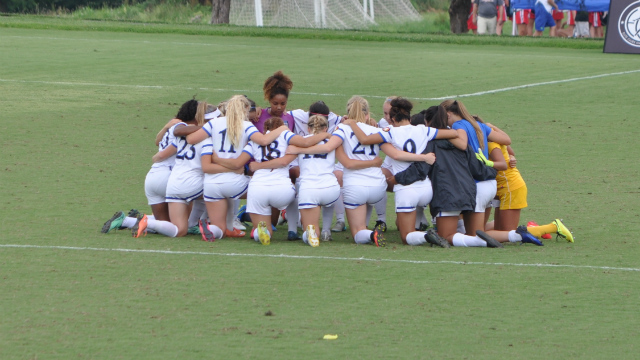 The national semifinals in the D.C. suburbs took place under sunny skies with a layer of humidity hovering over the match. Throw in a lightning delay, and it was par for the course for a Mid-Atlantic summer.

Here’s how things played out in Friday’s ECNL semifinals.

It was a dream start for Mustang SC when Ailani Price found the back of the net early in the first half.

Price scored from a rebound off a tremendous save from FC Stars goalkeeper Bethany Dunk. But the East Coast club slowly but surely turned the game in its favor, equalizing shortly after Mustang opened the scoring.

Saves from Mustang goalkeeper Angelina Anderson kept FC Stars at bay until the second half when a penalty broke the deadlock. A driven cross was handled in the box by a Mustang defender and Alexandra Panaggio put FC Stars ahead from the spot.

A great sliding finish from Halle McCabe late in the second half put the game out of reach and punched FC Stars’ ticket to the championship game.

In a clash of two California clubs, Slammers FC started strong and didn’t look back.

Emily Johnson’s free kick early in the first half snuck into the far corner to nudge Slammers out in front. The attacking verve of Jaida Smith, Jenna Nighswonger and Sara-Jayne Affleck proved to be difficult for West Coast to handle. Smith smashed a shot against the crossbar from a nice cutback from Nightswonger, before Affleck got in behind the West Coast defense to make it 2-0.

As Slammers continued to control the game, Natalie Hueston provided the goal of the game. Receiving the ball just outside the penalty box, she cut past a defender, beat a second one, and found the upper corner to put Slammers up by a 3-0 score.

There was little separating PDA and FC Stars, both on the score sheet and the field, as a Amelia Paternoster’s first half goal secured PDA’s spot in the national championship.

A brilliantly timed run past the last defender gave Paternoster one of the only chances of the game, and she smashed home a nice finish to the far post to stake the New Jersey club to an early lead.

FC Stars worked to make inroads in the PDA defense, but found little to offer. PDA nearly grabbed a second when Kayla Lee struck the crossbar with a shot from distance.

In the end, Paternoster’s strike was the difference in the tightly contested affair.

Crossfire Premier nearly erased a two-goal deficit, spurning a couple of late opportunities to tie its semifinal against Real Colorado.

The Colorado side, without youth national team players Jaelin Howell and Sophia Smith, jumped in front thanks to a tidy finish from Erin Hohnstein. Gracie Armstrong nearly extended Real Colorado’s advantage, though it remained a close game at the half.

Sophie Hirst fired a chance high of the target early in the second half, as Crossfire ramped up the pressure in search of an equalizer. Their aggression eventually cracked opened the door for Real Colorado’s second goal, as Armstrong scored to double their lead on a break.

However, Crossfire wasn’t ready to give up. With just a few minutes left on the clock, Emma Roehleder gave the Pacific Northwest side a glimmer of hope finishing off a rebound. That wasn’t the final chance of the game, as Denae Antoine flashed a shot just wide of the post, missing the tying goal by inches.

The two California clubs renewed their rivalry on the opposite side of the country, and it delivered perhaps the best of Friday’s action.

Without a conference loss and just three defeats on the season, De Anza looked to cap off another impressive season with a national title. Standing in the way was vaunted San Diego Surf, pitting together two sides that knew each other well.

And it was the Surf that nearly took the lead in spectacular fashion. Forward Catarina Macario received the ball in space down the left flank. Cutting back onto her right foot, she unleashed a shot from outside the area that eluded the goalkeeper, but only cracked the crossbar.

Not long after Macario's effort, midfielder Joelle Anderson put De Anza up front. Dribbling around the defender, she created just enough space to drive a tremendously accurate shot that nostled in the bottom corner of the goal.

Just under 10 minutes later, the Force extended its lead. Luca Deza worked the ball down to Kayla Fong on the right flank. Fong’s deflected cross fell to Samantha Tran at the top of the box, who lashed home De Anza’s second of the game.

A lightning delay of nearly an hour and a half gave both teams time to regroup and plenty to think about. Surf came out and took the came to the Force once play finally restarted. Macario produced a poacher’s finish to reduce to the deficit, but that was as far as Surf could push De Anza on the day.

Played simultaneously, there were striking similarities in the other Under 17 semifinal, as the Michigan Hawks hung on for a 2-1 victory.

Like De Anza, Michigan got off to a fast start, getting goals from Danielle Stephan and Catherine Dager, staking them to a 2-0 lead by the half.

Slammers pushed and prodded their way back into the game, however. Putting Michigan under pressure through set pieces and a long throw, a hand ball in the box prior to the lightning delay allowed Haley Hopkins to pull a goal back.

That would be as far as the SoCal side would get. Despite knocking on the door for the final stretches of the game – including hitting the post on a corner kick – the Hawks held firm, advancing to face De Anza in Saturday’s U17 finale.