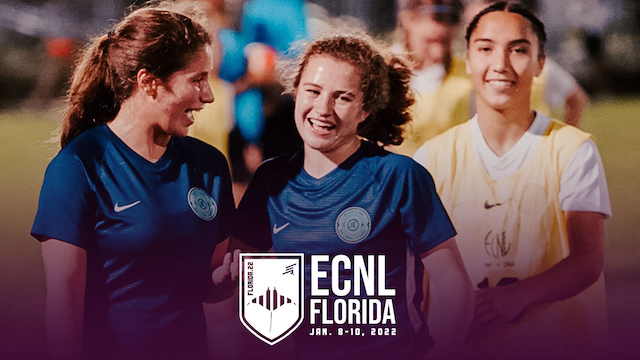 The National Selection Games are some of the best games at every ECNL National Event. All-star teams battling each other and showcasing the talents of each and every player.

It was much of the same at ECNL Florida – Club Competition, where the two National Selection Games had very different results and yet did a fantastic job of highlighting the high level of play by every athlete and what makes these types of games so special.

The U16/17 National Selection Game was filled with action straight from the opening whistle. Right off the bat, Team East took it to Team West, and it wasn’t long before East found the back of the net. Coming out swinging, Izzy Engle of Minnesota Thunder Academy opened the scoring for Team East, and she was quickly followed by World Class FC’s Claire Hutton, giving her squad a 2-0 lead 15 minutes into the match.

“There’s a reason some of them thrive in this type of environment,” said Team East coach Santino Quaranta. “Our midfielders, Claire Hutton and Izzy Engle, they were very confident all night and when you talk about big stages, sometimes a player may be nervous. But they thrived in those moments.”

Despite falling into a 2-0 hole, Team West refused to be discouraged and started chipping away and their deficit. Midway through the half, the team was rewarded for their efforts, cutting into their opponent’s lead by making it a 2-1 game.

As the half came to a close, Team East regained its firm grasp on the game, knocking in two tallies in the final minutes of the half to take a 4-1 lead into the break.

“I think our group tonight was really good in their approach,” Quaranta said. “The way they went about the game, they were aggressive and confident from the start and to score four goals in the first half was really impressive.”

That 4-1 lead was very short-lived, however. Making adjustments at halftime, Team West exploded for three goals within the first 15 minutes of the half, completely erasing Team East’s lead and setting up a very exciting close to the contest.

The two teams continued to trade punch and counterpunch, looking for the go-ahead goal that would keep their respective side in the lead for good. And each team had their moments, where it looked like victory was imminent. However, it was Team East who has able to finally pull ahead for good, scoring two goals late in the half to give Team East the 6-4 win.

“Before the game, we talked about enjoying these moments, but these girls are also competitors,” Quaranta said. “We wanted to perform well, but the girls also wanted to win the game. After those goals, Keri (Sarver, Team East’s Co-Coach) made some changes and the girls responded. They found a way to win and I thought they deserved to win.”

Meanwhile, in the U18/19 game, it was a battle between the NSG roster and FC Stars. The two sides were completely committed to defense throughout the match. Throughout the game, each attack was met with stifling defense, doing just enough to keep the ball out of the net.

For the first half, both sides were feeling each other out, trying to find weaknesses in each backline. But as the half wore on, it became apparent that finding those weaknesses would be tough. Both the NSG squad and FC Stars each had close chances to break through, but ultimately, the two sides headed to the half deadlocked 0-0.

The defensive battle continued into the second half, and it appeared the game was destined for a scoreless draw until Shae O’Rourke (WNY Flash) found the back of the net for the U18/19 NSG team midway through the second.

“Scoring that goal was amazing and such a rewarding experience,” O’Rourke said. “Without the team, it wouldn’t have been possible. Our team was amazing and I couldn’t have played as well as I did without their support and the support of my WNY Flash teammates cheering me on from the sidelines.”

Now armed with a lead, the NSG team reaffirmed its dedication to keeping the ball out of their net, while FC Stars, already pushing for a tally, put more numbers forward in hopes of an equalizer. However, the NSG backline stood strong, and at the final whistle, the NSG side earned a tough 1-0 win.

“Playing in this game was an amazing experience,” O’Rourke said. “The whole atmosphere was intense but so much fun to play in. Playing with and against some of the best players in the ECNL is something I’ll never forget.”