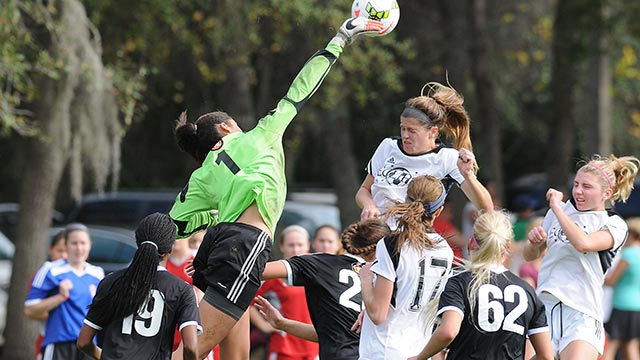 The final day of the ECNL Showcase took place in rainy conditions at Seminole Soccer Complex, as each elite team had one last showing in front of the hundreds on college coaches in attendance.

The early afternoon fixture between FC Dallas and Ohio Premier featured a tale of two halves. FC Dallas were the more dominant side early on in the game, dominating possession in all areas of the park.

Dallas were effective in combining in the final third, yielding an eventual goal in the first half to move ahead. After earning a corner, FC Dallas scored their first game of the match when Emily Sample nodded home a strong header to give the Texas club a 1-0 advantage.

The second half featured a more inspiring performance from Ohio Premier, after spending the previous 45 minutes bunkering in behind. Ohio Premier began attacking FC Dallas relentlessly, yielding an equalizer midway through the first half when Bella Shivley scored off an assist from midfielder Jordan Taylor.

Berry opened the scoring for CSA and Walker quickly followed up with a finish of her own to give the North Carolina- based side an early 2-0 advantage. Walker went on to secure a hat-trick as she tucked away two more clinical finishes and then a fourth goal in the second half.

Moments before the break, Tatiana Cruz provided the opening goal for World Class. In the second half, World Class made a push to equalize, however CSA found the back of the net five times, resulting in a 7-4 final score.

The final match of the day between Orlando City and NC Fusion was a defensive affair as both sides battled to 0-0 score-line in the first half.

Orlando City were the more dominant side, in terms of possession and chances created, however the Lions were unable to produce the finishing touch required to open the scoring in the first 45.

Nevertheless, Christen Barney would provide the breakthrough for Orlando City in the second half, capping off an impressive build up from OCYS. Beginning from deep inside their own half, Orlando City combined well to work the ball into the channel, leading to a dangerous cross inside the 18-yard-box.

Midfielder Christen Barney was lurking inside the area and was able to place the cross into the back of the net, providing the game-winning goal for Orlando.

Solar Chelsea’s Taryn Torres and West Coast’s Athena Mukanos fought hard against each other in the midfield the entire game.  West Coast was putting pressure on the Solar Chelsea defense, but defender Hannah Webb came in with many big tackles to save her team. While both teams fought hard for 90 minutes, neither was able to put one in the back of the net.

Virginia commit Hana Kerner wrapped up a strong showing in Florida with a goal and two assists, as the New Jersey club side topped a quality McLean outfit. Maxine Blackwood, Allysa Cronin and Samantha DePinho each tallied for MFA as well, while Kerner finished the three games with three goals and three assists. Jarena Harmon had the consolation for McLean.

Although Surf moved the ball well, they were unable to stop the pressure of the NC Fusion. Cameron Keating scored Fusion’s first goal on a free kick from just outside the box. Three minutes later a Fusion forward stole the ball from a Surf defender and finished her chance. Another chance for Fusion came just before the end of the first half when Ellen Harris had a break away, but the Surf goalkeeper Hanna Deweese came up with a huge save and denied her the goal. Surf scored once in the second half to end the game 2-1.

The U17 PDA team finished their weekend playing another Texas team, the Dallas Sting. The first goal of the match came from Sting’s Cyera Hintzen 20 minutes into the first half. Hintzen beat a PDA defender and placed a shot in the upper left corner, putting PDA behind 1-0. Right before the half, PDA puts in the equalizer with a finish by Siobhan McGovern. The game was scoreless in the second half, leaving the final score 1-1.