Excelling at an ECNL Showcase is no easy task. Three games in three days are not optimal for elite talent to show their best stuff.

However, with the quality in the league, plenty of players manage to put their best foot forward. Here’s a small sample of stars who just managed to do that last weekend at the Frisco Showcase:

The KC standout was another top player able to live up to her reputation – she was called in to an upcoming U.S. U17 WNT camp in March – influencing each game her club was involved in and finishing the weekend with one goal and two assists. 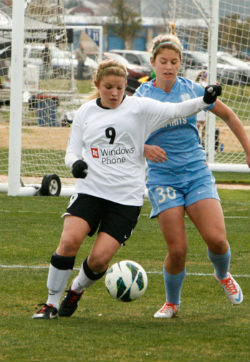 Her breakout game came on Saturday with a goal and two assists in a 3-1 win against the Richmond Strikers. Helped keep clean sheets in the other two games of the weekend, both 0-0 draws.

The rising star continues to live up to her billing, as the forward found the back of the net four times in Frisco, as her club side won all three games over the weekend.

Another promising striker bound for a big collegiate program – Ball is committed to Penn State – the Richmond product notched a goal in all three games she played in, including a couple impressive tallies.

A back line anchor for a Lonestar side that enjoyed a successful spell in Frisco, the defender played a prominent role in each result: beating Santa Rosa United 4-0, Charlotte Soccer Academy 2-0 and tying Crossfire Premier 2-2.

It was a successful ending to CESA’s season, as they won all three games down in Frisco, thanks to a strong team effort and standout play from Chelsea Drennan. The attacker scored twice in the opening game and assisted on the game winner in the second game.

Dobbs led a strong defensive effort for the Hawks in two wins and a draw, and added a goal as the team's defense helped carry the club to a solid and successful road trip.

The U.S. youth international found the back of the net twice in what was an all around excellent performance, one of her best at an ECNL national event.

A complete defensive effort from her center back spot helped WPFC win all three games without conceding a goal in Frisco.

The attacker scored three goals in three games, which included impressive wins over Sporting Blue Valley and the Dallas Sting. Crossfire tied their third game of the trip, producing an unbeaten trip to Texas.

The defender put in three consistent shifts at her center back spot, as Internationals went unbeaten in its three games, featuring two wins and a draw in the club’s first trip to an ECNL National Showcase.

The midfielder found the back of the net three times in three games for the Texans, as they posted a 2-1 record in Frisco. That included a two-goal performance in a 2-1 win over Crossfire Premier on Sunday.

The leading scorer on her club side, Neidert scored three goals in two games at Frisco, as her club secured two draws and wrapped things up with a win. The forward now has 14 goals on the season.

While her club struggled at times during its conference schedule, thanks to a three-goal, three-assist performance from Kondikoff, D’Feeters won all three games in Frisco, scoring nine goals and conceding zero.

The midfielder scored two of her team’s three goals on the weekend, and also added an assist for good measure, as FCV posted a 1-1-1 record down in Texas.

The dynamic forward was one of the leading offensive producers on the weekend, scoring six goals and adding three assists as the Tulsa club cruised to three comfortable wins.

Scored a pair of goals as her club went undefeated in three games, including a 4-1 win over the Dallas Sting.

Playing with a fracture in her foot, the center back showed plenty of ability, helping FCD to two wins and a draw, while conceding just one goal on the weekend. Also set up one of her team’s goals.

The future Maryland Terrapin provided a fantastic offensive punch for Carmel, scoring a goal in each of their three games and adding an assist as the Indiana club posted a 1-1-1 record, including a close 2-1 loss against Lonestar SC.

A four-goal performance in a 5-1 win over Charlotte Soccer Academy highlighted Pounds’ weekend, and she also notched an assist as her club side finished with two wins and a loss.