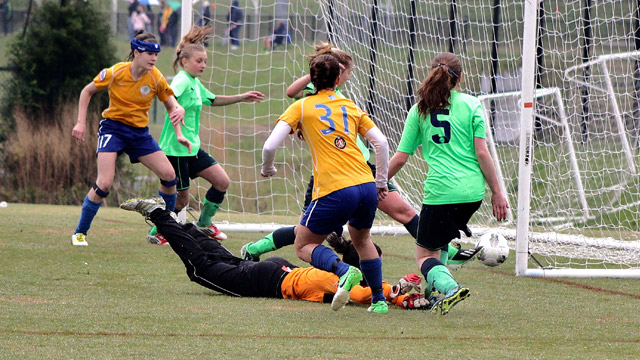 One of the top early games of the ECNL U14 Inter-Conference Event took place between FC Virginia and the FC Stars of Massachusetts. 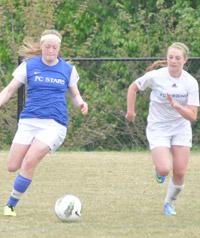 Virginia entered the contest as the top team in the Midatlantic Conference, and Massachusetts, a team made up of players from several states, is second in the Northeast Conference behind PDA.

Massachusetts took a 1-0 first half lead when Gabrielle Brummett scored on a cross from Elysia Paolillo. Virginia tied the match before intermission after Casey Kent found the back of the net when Massachusetts was able to clear the ball on a corner kick. The goal was Kent’s sixth in 17 games.

While both teams had scoring chances in the second half, Massachusetts scored the only goal. Jennifer Herrera provided the game-winner when her soft touch in traffic rolled past Virginia goalkeeper Randi Palacios.

The goal was Herrera’s fourth in 17 games, and coach Tom Phillips said it could prove to be a confidence builder for his young star.

“She is technically a very, very good player,” Phillips said. “We talk about that when you are on the field, you have to effect the game in a positive way, and she did that today. She is tough on herself because she wants to be the best. A goal like that will only give her confidence going forward.”

Brummett’s goal was what has become expected of the speedy forward, giving her 33 in 18 games.

“She is very difficult to defend,” Virginia coach Christian Cziommer said. “There is a good reason she already had 32 goals this season.”

Overall, Phillips was pleased with his team’s performance, especially with it being against a top-notch opponent and the first game of the tournament.

“I thought both teams were very, very good,” Phillips said. “With the amount of travel involved in getting here, I thought there were some tired legs at the end. The quality of the match was good, and both teams competed well. I thought we actually lacked that little bit of quality going forward, but that is why you come here, to play against top teams, to compete against top teams.”

Like Phillips, Cziommer said it was good to begin the tournament with a high-caliber opponent.

“I thought it was quite even on both sides,” Cziommer said. “I thought they controlled more of the ball in the first half, and we controlled it more in the second half. We didn’t seem to have the creative ideas to break them down in the back. The times we got through, we just couldn’t connect.

“I think we are two of the better teams in the tournament, and it could be another good game between the two teams down the line.”

Casey Kent, Forward (FC Virginia) – The forward scored her team’s only goal against the FC Stars of Massachusetts, but gave the squad several chances to tie the game with spot-on passing.

Katie Le, Forward (FC Virgina) – The forward entered the game with two goals and five assists, and looked as though she may add to those totals with a handful of chances. Her speed with the ball and ability to pull away from defenders makes her a difficult assignment.

Randi Palacios, Goalkeepr (FC Virginia) – Palacios, the only goalkeeper on the team's roster, made several saves and showed why her team had only allowed eight goals entering the match. Her point-blank stop against Massachusetts’ Brummett kept Virginia within a goal.

Gabrielle Brummett, Forward (FC Stars of Massachusetts) – The forward entered the tournament with a league-leading 32 goals, and showed why. She is a brilliant player with the ball, and her speed not only allows her to break away from defenses but to quickly close in on the ball when in pursuit.

Elysia Paolillo, Forward (FC Stars of Massachusetts) – Paolillo has proven that she can score with 14 goals this season, but is also a strong passer. Her height makes her dangerous in front of the goal, and she is surprisingly quick.

Jennifer Herrera, Forward (FC Stars of Massachusetts) – Along with Brummett and Poalillo, Herrera helps to form a formidable front line for her squad. She is the fifth-leading scorer on the team, but has a nose for the ball and is capable of scoring against the toughest defenses, as she did against Virginia.

Despite pouring rain and strong winds, day two of the U14 Inter-Conference Showcase still provided quality matchups as teams from the Southeast Conference, Mid-Atlantic Conference and Northeast Conference had a chance to show off their skills.

The most competitive match of the day came with the first match as Carmel United topped Scorpions SC 3-2 in a thriller from start to finish.

Check out a recap of a few of the featured matchups from day two of the ECNL Inter-Conference Showcase below.

Carmel United, Grande Sports Academy Team Rank Top 25 for girls U14, got two goals from the foot of second-leading scorer Hope Van Wagner and another from Laura Lentz in tightly contest battle with Scorpions SC of the Northwest Conference.

Carmel United was on the offensive early and often as a shot by Lentz was deflected by Scorpions SC defender Emma Burleigh. On the ensuing corner kick, Lentz again had a shot on goal but was left of target as Scorpions SC was able to survive the early attack.

Scorpions SC flipped its offensive switch soon after, driving deep into Carmel United territory and netting the game’s first goal as Rachel Boule placed a shot into the back of the net for an early lead.

Van Wagner continued the Carmel United attack and broke through mid-way through the first half. Leading scorer Alexandra Rice sent a free kick into the box that found the foot of Van Wagner to tie the game at one goal apiece.

A diving save from Scorpions SC goalkeeper Megan Adams kept the game tied at 1-1 heading into the halftime break.

After intermission, Carmel United’s offense continued to put the pressure on scoring early in the second half of action. Midfielder Alicia James sent a shot in from outside the box that bounced off the crossbar. The rebound found Lentz in the box who drove home the shot to put her team ahead by a one goal margin.

Carmel United added a third goal minutes later as James' shot was deflected by the keeper but Van Wagner collected the rebound and score her second goal of the game to give Carmel United a 3-1 advantage.

Scorpions SC did not give up as the persistence paid off late in the game when a bouncing ball in the box was settled and driven into the back of the net by Eve Hewins to cut into the lead.

A shot by Elizabeth Weimer in the closing seconds was on target but Carmel United goalkeeper Cailyn Kootz collected the shot and seal the 3-2 victory.

In a contrast of playing styles, the top team in the Mid-Atlantic Conference and Top 25 member FC Virginia was able to shutout Southeast Conference member Birmingham United on day two.

The fast-paced FC Virginia wasted no time in putting pressure on the Birmingham United defense, firing shot after shot in the opening minutes. However, Birmingham United goalkeeper Ashley Orkus made two diving saves, punching one shot over the cross bar, to keep the game all square in the early going.

FC Virginia finally broke through with its first goal of the game as Casey Kent brought down a deflection, make a move around the keeper and push the ball into the net for a one goal lead.

Minutes later, Grace Mondloch settled a rebound at the top of the box and send a shot into the top corner to provide FC Virginia with a 2-0 edge at the half.

The second half of action held much of the same for FC Virginia as Katie Le and leading-scorer Gabriella Gordon each recorded a goal to give their team a four-goal victory.

Hope Van Wagner, Forwad (Carmel United) - An offensive star on day two, scoring two goals, including the eventual game-winner, in the team’s 3-2 victory over Scorpions SC. Van Wagner was constantly in the middle of the offense for Carmel United as almost every possession involved the forward as the team controlled the second half of action, claiming the win.

Ashley Orkus, Goalkeeper (Birgmingham United) - In spite of being hit with a loss, she had a solid game against offensive powerhouse FC Virginia. Orkus recorded nine saves in the defeat as FC Virginia was able to fire 17 shots in the game, including 13 on goal as the goalkeeper was kept busy all game, dazzling with multiple diving saves in an effort to protect the net.

Who else excelled this weekend? Tell us in the comments below!