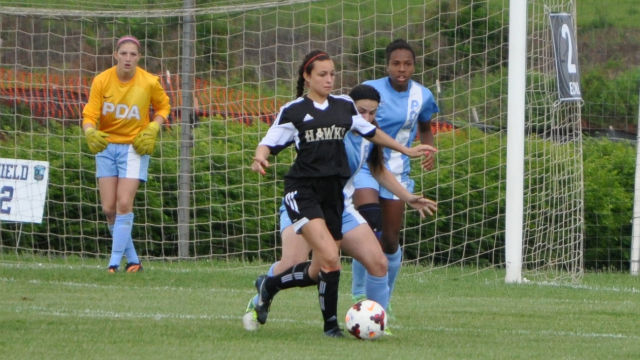 SOMERSET, N.J. — Every ECNL National Event is an opportunity to line the best clubs in the country against one another.

That was certainly the case on the first day of the final ECNL event of the regular season up in Northern New Jersey, as PDA played hosts to a smattering of clubs from across the country.

The big matchups on Saturday delivered some entertaining encounters, even if goals were lacking in a few of them. Here’s a look at the highlights:

One of the games of the day, a ferocious Match Fit Academy blitzed a depleted Michigan Hawks side in the game’s first 30 minutes, before holding on for a one-goal victory.

The scintillating start for Match Fit game was the Hana Kerner show, as the Virginia recruit found the back of the net twice within the game’s first 20 minutes. Her first effort was a dipping, curling shot from distance off her right foot that eluded the Hawks goalkeeper, while her second came after she won a footrace to the ball, beating Michigan’s defense to slot home.

Kayla Jennings extended the lead to 3-0 for Match Fit with another shot from distance, as the New Jersey club looked the stronger side out of the gates.

However, slowly but surely the Hawks clawed their way back into the game. Courtney Petersen turned home a cross to make the score 3-1. And it could’ve been 3-2, but Match Fit goalkeeper Phallon Tullis-Joyce saved a penalty kick from Petersen and maintained the two-goal advantage.

After the break, the advantage tilted toward the Michigan side, as Petersen provided numerous moments of danger along with Marisa Viggianao. The former ultimately narrowed the deficit even further, and the Hawks were in control. The search for the equalizer came up short, as the defensive efforts of Alana Cook, Jennings and Joyce-Tullis secured the win.

Two premier clubs tussled, and neither could solve the other’s back line, as PDA and Eclipse fired a couple of blanks early Saturday morning.

Dangerous scoring chances were limited – PDA goalkeeper Penelope Edmonds had to be alert on a first half lob from 20 yards out, tipping it over the bar to keep things even early on in the game.

Elizabeth Woerner looked to push the Eclipse offense into gear, only to be stymied by Northwestern recruit Jenny Haskel.

The best chance of the game came in the second half, when a cut-back to the top of the six-yard box found Taylor Racioppi, but she steered her shot just wide of the post, under pressure from the Eclipse defense.

An early Eclipse Select goal waived off for offside was the harbinger for things to come, as Eclipse SC and FC Stars duked out one of the day’s highest scoring encounters.

After the close call, Eclipse goalkeeper Radhika Patel made a couple of important early saves to deny FC Stars attacker Gabrielle Brummett, who would be in the mix of things through most of the day.

Shortly after Patel’s saves, Eclipse jumped out to a 2-0 lead, thanks to goals from Janeece Ader and Channing Foster. That pairing went on to run the show the rest of the first half and helped extend the lead to 4-0 before the break.

Brummett and the Stars weren’t down however, and her marauding run was turned in for an own goal, reducing the deficit to 4-1 at the halftime whistle.

An early FC Stars goal after the half cut the lead to 4-2, but Ader scored another, restoring the three-goal lead. FC Stars weren’t done though, as a scrambled home goal from a set piece made it a 5-3 game, and Mackenzie Vlachos tallied for the Stars to make it a one-goal game.

With just minutes left, FC Stars were practically shooting on site in an effort to secure the draw, but came up shy of a tying goal.

A goalkeeping clinic from PDA netminder Evangeline Soucie secured a point for the host side in what was a match that pushed both sides to the test.

The Hawks came out the more dangerous of the two sides, as Madeleine Lucas proved to be a thorn in the side of PDA early on. Lucas was slipped in behind the PDA defense, only to see Soucie stay big to snuff out the opportunity.

After weathering the early Hawks storm, PDA played its way into the game, looking to unlock the Michigan defense through Alexa Ferreira and Zoe Steck.

Both sides had great looks in the second half. Ferreira was played in behind into space, though the Michigan defense closed quickly and stymied her before she got a dangerous look at goal. Hawk attacker Alexxis Lipsey nearly won it herself with minutes to go, outmuscling a PDA defender, only to see Soucie make a tremendous reaction save to keep it scoreless.

The forward duo of Hannah Stammer and Summer Mason provided most of the dangerous moments, as Mason scored in the West Coast club’s triumph against its Virginia opponent.

Mason had a couple of clean looks in the game’s first five minutes that were snuffed out and handled easily by the McLean ‘keeper.

Midfielder Toni Holland scored what turned out to be the game winner, delivering her strike from a set piece, while Mason capped her day by finally getting an insurance goal late in the game.

Julia Panko’s goal later in the second half secured a draw for the Pennsylvania side that trailed 2-1 thanks to goals from Nicole Cox and Madison Moroi. The result was pretty fair on both sides, as the game seesawed back and forth through most of the day.