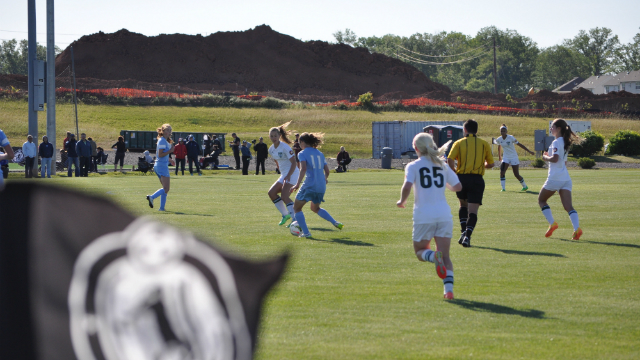 ZAREPHATH, N.J. — The first day of action at the 2015 ECNL New Jersey National Showcase was packed with quality, as a number of top teams tussled for superiority, bragging rights and three points.

Below is a highlight of a handful of matches from Saturday’s opening salvo of action.

Host side PDA Gunners opened the weekend in classy fashion, scoring three times in the first half and eventually pulling away from McLean for a 5-1 win.

After a strong start to the game that saw PDA control possession for long stretches, Amelia Paternoster got things going, controlling a cross in the penalty area and lobbing it over a charging McLean ‘keeper. PDA doubled the advantage from a set piece later in the half, and extended its advantage to three when Sophie Brause stole the ball from the McLean restart and slotted it into the back of the net to put the home side up 3-0.

Despite the deficit, McLean seized the initiative as the first half drifted to a close, determined to build the ball from the back and work it around the field to creat scoring chances. The Virginia side was rewarded with a goal just before halftime when Aleigh Gambone pressured the PDA goalkeeper, intercepting a pass and chipping it into an empty net to cut into the lead.

Hopes of a comeback were short-lived however. Midfielder Jessica Schildkraut powered home a nice free kick from outside the penalty area, and Laura Jackson tacked on to the lead when she blocked a goalkeeper’s clearance into the back of the net.

De Anza midfielder Tierna Davidson earned a second half penalty that was converted by defender Sophia Derterossian in a tight win over the So Cal Blues.

Looking to impress a possession-style of play on the game from the start, De Anza found it difficult to break pas the press of the Blues, thanks in part to hard work up front by forward Isabella Bellinghausen and Jada Talley in particular.

Right back Emily Smith had a pair of opportunities to score herself, only to see a first effort go wide and the other opportunity was snuffed out by goalkeeper Emma Malsy.

Best look of the first half for the Blues fell to Celina Alvarez when a cleared corner fell to her at the top of the box, though she could only fire it over the crossbar.

Just when it look like it was destined to go to 0-0 at the half, Reina Bonta nipped in to steal the ball from the Blues back line, rounding Malsy and tapping it into an empty net.

De Anza continued pressing forward after the break, eager to build on its lead. Goalkeeper Hillary Beall had other ideas after entering the game at the half, palming a Kayla Fong shot wide in the first few minutes.

From there, momentum was up for grabs, but De Anza Force eventually seized momentum with Fong, Luca Deza and Davidson all impressive. With the Force controlling most of the game but failing to create clear scoring opportunities, a run by Davidson into the box was rewarded when a sliding So Cal Blues defender clipped her leg, providing the chance to win.

Defense reigned supreme in a matchup of a pair of club powerhouses, as neither side managed to find the back of the net in a scoreless draw.

Perhaps the best chance of the first half fell at the feet of Hannah Drkulec. A bouncing ball from a half-cleared corner came to her at the penalty spot, though her firm blast struck the bar.

Real So Cal goalkeeper Brooke Littman tidied things up after that, intervening on a couple of dangerous chances in the second half. Samantha Bruder spearheaded the attack, while Courtney Gazmarian was lively on the right flank. Despite enjoying the lion’s share of the ball, Hawks defense held firm, thanks in part to Avery Hay holding firm against a handful of big, physical players.

A late goal from Mary Alice Vignola secured a tie for Ohio Elite SA in a seesaw affair with Orlando City SC.

Both teams led at one point in the game. Ohio surged ahead on the back of a strong first half performance, punctuated by a nice long distance strike from defender Chandler Backes. Behind dominant flank play from left-sided stalwarts Virgnola and left back Brooklyn Rivers, the Ohio attack surged forward time and time again, only to lack that final pass in the penalty box or to see the chance snuffed out by Orlando goalkeeper Olivia Printy. It left Backes’ goal as the sole strike in the opening stanza.

Orlando grabbed a foothold after the break and eventually punished the Ohio profligacy. Natasha Castellano’s goal early into the second half leveled proceedings, and a scrappy Makenzie Burton finish gave the Florida side its first lead of the game.

Backes would strike again from a set piece. A diagonal delivery into the box beat a pair of Orlando defenders, and Backes was perfectly situated in front of goal to tap home with Printy out of her net.

Parity was short-lived however, as forward Maria Munoz beat Ohio Elite’s back line to a long, looping cross to head home and restore Orlando’s lead.

Vignola ensured that the points would be split with about five minutes to go, outracing and outmuscling an Orlando defender to slot home the game’s tying goal.