ZAREPHATH, N.J. — Soccer in the sun on Sunday was the order of the day as the ECNL National Event continued.

Here are some of the highlights as college coaches continued to scout recruits and the battle for playoff spots continued.

A beautiful goal from midfielder Mia Corbin and a scrappy finish by Madison Schultz paved the way for Crossfire Premier’s win against a solid FC Stars outfit.

Crossfire had to hold on for the full points after Sydney Brackett won and converted a late penalty in the last ten minutes of the game, but the Pacific Northwest club survived without any further scares to pick up the victory.

Forward Allyson Reynolds produced a number of dangerous first half moments dribbling down the left flank for the Stars, while Crossfire’s Asia Brisco was stuffed on the break in the game’s first half.

Corbin eventually opened the scoring with a powerful shot from distance midway through the opening stanza. FC Stars nearly answered right back from the ensuing kickoff, as Reynolds was slipped in behind the back line, only to see Crossfire goalkeeper Natalie Dierickx make a tremendous one-handed stop to keep out a point-blank effort.

Schultz doubled the lead for Crossfire in the second half when she bundled home a corner kick that bounced around in the goalmouth, punctuating a morning where the attacker bombed up and down the flank.

Brackett pulled a goal back in the final minutes of the match thanks to a crafty move in the area, but Crossfire came the closest to score again, as both Corbin and Megan McCaughey hit the post.

Very little separated the two sides during the morning battle, as a second half goal from Eve Hewins provided the margin of victory for the Breakers.

Hewins was one of a handful players creating havoc in the final third, as she showed the ability to dribble and combine with her teammates to create space.

Richmond had the earlier chances to score however, as Emily Layman and Laurel Ness had opportunities that just missed. Amia Canada provided a lot of service from the left flank, as she showed a willingness and ability to beat the opposition off the dribble.

Goalkeeper Grace Young was forced to make a save early in the second half to keep Boston off the board. Just when it seemed like neither side would break the deadlock, Hewins popped up to provide the winner, finishing a nice move at the top of the box.

Another billing of top programs from each coast delivered an entertaining encounter, as the So Cal Blues survived two penalty kicks to pull away with a 3-1 win.

A sensational strike from midfielder Samantha Hobert provided the winning margin, and forward Isabella Bellinghausen’s delicate chip put the game out of reach late in the second half.

It certainly wasn’t easy as hosts PDA put up a tough fight on the day. Defender Sabrina Encisco put So Cal Blues up 1-0 in the first half off a corner kick, as the ball bounced out from a scrum of players to Encisco, who roofed the game’s first goal.

PDA had a chance to tie with a penalty late in the first half, but goalkeeper Hillary Beall saved Ciarra Snyder’s spot kick. The New Jersey side got a second penalty after the break, and midfielder Meme Taylor Morgan made no mistake, converting this opportunity to make it 1-1.

Bellinghuasen set the table for Hobert’s winner. Going on a mazy run down the left flank, the forward poked it to Hobert who was about 25 yards away from goal. She picked her head up and ripped an unstoppable left-footed shot past the goalkeeper to put the Blues up 2-1.

PDA had chances to tie the game, with both Morgan and Snyder came close to tying the game. Bellinghausen made sure that the Blues would win, however, as she outmuscled a defender on the right flank, coasted in on goal and lofted the ball up and over the ‘keeper into the back of the net.

Second half goals from Camryn Evans and Samantha Kleedtke carried the Hawks to a come-from-behind victory against a tenacious World Class FC side.

Forward Rebecca Jarrett finished off an early opportunity to put World Class up 1-0. From there, momentum began to swing towards the Hawks, as they looked to put their foot on the ball and control possession.

The equalizer eventually came from the head of Evans, but Madison Donley did a lot of the hard work on the goal. Donley, whose rampaging runs down the flank had provided a number of dangerous chances, eventually found some space to loft in a beautiful cross that Evans nodded into the net.

World Class goalkeeper Kerry Sammon made a pair of great saves to keep the scores tied, included a one-v-one battle against Donley. Eventually, Kleedtke provided the breakthrough, curling a free kick into the upper corner to put the Hawks up 2-1.

Jarrett had a couple of chances to equalize, but goalkeeper Julia Lower stood strong in net to help preserve Michigan’s win.

A set piece was the difference in this one, as Kiersten Madsen’s point blank header in the second half accounted for the game’s lone tally as Washington Premier edge Indiana Fire.

While each side had scoring chances prior to that, it was a very even game. Indiana Fire’s attack, led by Alexandra Rice and Ryanne Browne, carved out a handful of opportunities in the game’s early stages. McKaley Goffard and Jenna Killman were two of the strong offensive performers for Washington, as they showed the ability to break things down off the dribble.

Madsen’s header came sandwiched between a pair of chances Indiana had, as Rice nearly scored a goal of herself, nodding the ball wide on one occasion and curling another chance just past the post.

Ultimately, Madsen’s goal proved to be enough as Washington held on down the stretch.

Abby McNamara scored the third and winning goal for the Ohio outfit, breaking a 2-2 tie in the second half. Olivia Brown and Annabelle Hopper also provided the offense for Ohio Elite, which managed to hold onto the lead and win for the first time during this year's trip to New Jersey. 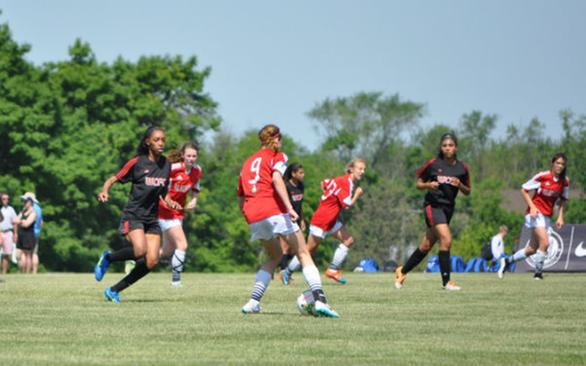