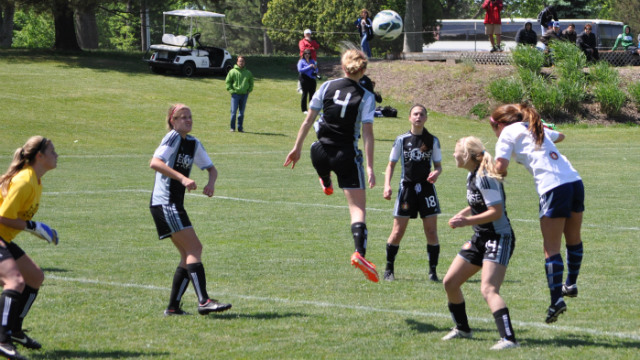 ZAREPHATH, N.J. – The sun broke through on Sunday, but the challenges from Saturday lingered on day two at the ECNL PDA event.

With the clouds departing but the wind staying, the majority of each game was a tale of two halves – whichever team with the wind at its back usually enjoying the better of the two sides.

The blustery conditions aside, another common thread of the day was strong second half performances, as several teams scored early and often after the break to pick up the full points. Here’s a look at some of the action from day two:

Three goals in the second half secured a win for the Indiana side in one of many close encounters on the day. 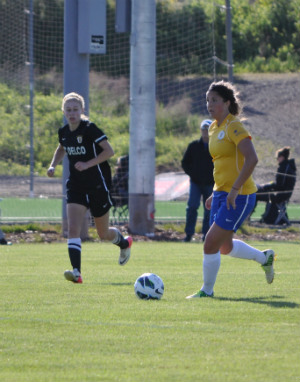 At first, it looked like a heroic performance from FC Delco goalkeeper Christiana Ogunsami would keep Carmel off the score sheet altogether, as she made several outstanding saves against an extremely dangerous attacking squad. She made several stops on Michigan-bound attacker Reilly Martin, who terrorized Delco’s flanks during the match, while Katy Keen also tested Ogunsami from distance on several occasions.

The ‘keeper’s play – including a sensational one-handed stop on Kenadie Carlson early in the second half – allowed FC Delco to take the lead when Rebecca Sherry scored from a corner kick before the break.

In the second half, with the wind at their backs, Carmel looked even more dangerous, only to see Ogunsami come up with an answer almost every time. Finally, Carlson broke the deadlock, tapping home after Madison Turner recovered her shot that was initially blocked by Ogunsami.

Martin, who didn’t hesitate to shoot often throughout the game, finally got her goal just a few minutes later. After turning her defender on the right side of the box, Martin beat Ogunsami at the near post to take a 2-1 lead.

Despite the setback, Delco continued to press, attacking through Linnea Faccenda in midfield and Mikayla Smith up front. But Carmel would strike again and extend the lead to 3-1, bagging a set piece goal through a thunderous header from Madilyn Mann on a corner kick.

Delco would pull one back through Smith, who snuck a shot past Catherine Schmidt in the game’s last ten minutes – but Carmel’s tough and tenacious defense, buoyed by a strong outing from Gabrielle LaMere, would see out the win.

For the first half, FC Dallas couldn’t find a way past Utah Avalanche goalkeeper Isabel Jones.

The sure-handed net minder dealt with everything the Texas club threw at her through the first 40 minutes, denying forward Madeline Barnes and the rest of her teammates until the break. Jones hardly put a foot wrong, but was eventually beat by Barnes who deflected a cross into the back of the net early on in the second stanza.

FCD added a second a few minutes later from a set piece, as defender Cassandra Marciante’s glancing header doubled the lead. Utah looked to Kyra Fawcett and Bayley Bruner to get back into the game, but they were unable to solve the Dallas defense.

The Illinois club had several chances to find the back of the net, but thanks to some unlucky finish, the offside flag (twice) and some good goalkeeping, it was West Coast FC who won the matchup.

A composed finish by Emily Steil in the second half proved to be the winner, as she deflected home an excellent cross by Kaitlyn Cook, who stormed down the right flank to in a great ball during the winning sequence.

Eclipse thought they took an early lead when defender Megan Kalkofen’s free kick from just inside the halfway line snuck into the far post – only to be denied by the offside flag. Forward Maya Neal and Kayla McCoy were definitely a handful, showing quality when on the field, but West Coast’s back line was up to the task to lock the Eclipse SC attack down.

But the California club went down a player when Hailey Hite was shown a red card, though they were able to weather the storm and get the winning goal through Steil. 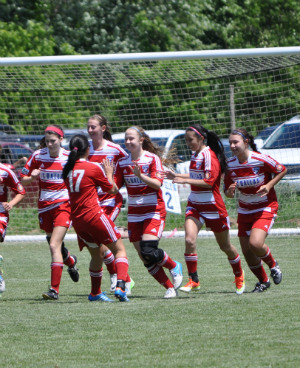 Another team that scored three times after the break, Slammers FC won its second straight game in New Jersey on the back of an outstanding performance from MacKenzie Cerda and Lauren Guerra.

The UCLA recruit was one of many Slammers players to put in a hard-working and standout shift. Jessica Wong, whose energy on the flank troubled Sockers for most of the match, was tripped up in the box to earn a penalty, which Guerra calmly dispatched home to open the scoring five minutes into the game.

The lead wouldn’t last till halftime however, as a wind-aided corner kick from Sockers midfielder Mary Rose Pettenuzzo went straight in to tie the score at 1-1.

Cerda stepped up her game after the break, spraying balls across the field and quickly restoring the lead thanks to a strong individual effort. After winning a ball in the corner, Cerda turned her defender, outmuscled another and hit a curling effort into the upper corner to restore Slammers FC's advantage.

From there, Slammers continued to cruise, scoring two more goals. Guerra got her second goal of the game cleaning up Jessica Wong’s shot that hit the post, and Wong added the final tally with another fantastic effort from range.

FC Virginia nearly kept a talented Hawks side at bay for a full game, only to concede two late goals in the second half in a tough encounter.

Strong midfield play from Courtney Petersen on the flank and Zoe Morse in the middle of the park were quite the handful, as the duo created plenty of early scoring chances the Hawks couldn’t quite put away.

On the other side of the field, Laura Malacane and Emma Lark nearly delivered goals for Virginia, as they hit the crossbar in the first half, and Makayla Lewis just missing the rebound.

Jaclyn Engel eventually struck for the Hawks, cleaning up a spilled rebound, before Alexis Warner put the game away with a determined effort, winning a footrace with an FCV center back to make it a 2-0 game – a lead that Michigan was able to hold.

It was a great comeback for Kylie Williams.

The forward scored the decisive goal in SoccerPlus Connecticut’s win, as she continued her return from an ACL injury this spring. Her instinctive run to the back post and glancing finish off the far post was enough after Katrina Hersh opened the scoring.

Taylor Kemmeling grabbed a goal in the final ten minutes, but Gwinnett couldn’t find a second goal on the day.