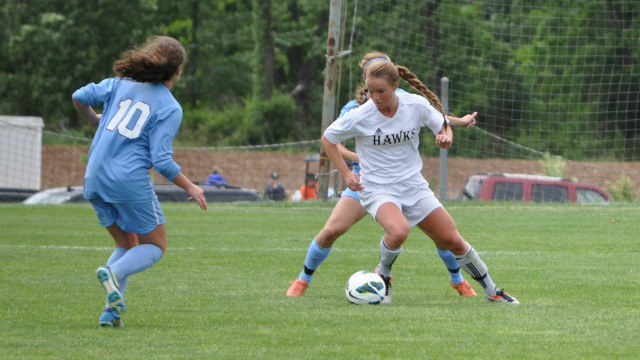 ZAREPHATH, N.J. – Most Memorial Day weekends in northern New Jersey are hot and humid – far from the perfect backdrop for soccer.

This year was a bit different, at least on the first day, even if it presented another type of challenge. 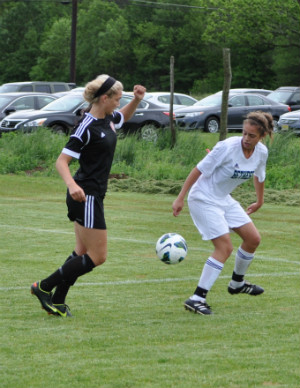 Under an overcast sky and chilly day, the final National Event of the ECNL regular season kicked off, with players flocking from all corners of the country to compete in front of scores of college coaches.

The wind became the story for much of the day, as it handed a huge advantage to whichever side was playing with the wind at their backs, causing at times some wild bounces and goal kicks that were blown back into the face of a goalkeeper. Despite the so-so conditions, the players stepped up and put in some entertaining and quality performances.

A matchup of two of the most prestigious clubs at this weekend’s event delivered the goods, as PDA and Michigan Hawks collaborated for an entertaining 2-2 draw during the morning.

The Hawks nearly came away as winners on PDA’s turf as well, getting goals from Megan Buckingham and Jamie Cheslik, only to be denied in the second half by a Rachel Corboz tally from the spot to level the score.

The North Carolina-bound Buckingham showed her class all game, making menacing runs and putting her side out in front early in the match. Making a run behind the defense, Buckingham cut back in the PDA box and unleashed a beautiful, right-footed shot into the far corner. Her and Cheslik were in dangerous form throughout the game, as PDA controlled possession during stretches and the Hawks looked to their strike duo to make the offense tick.

Michigan’s lead would last until just after the half, when Bree Livingston prodded home the equalizer to tie the score at 1-1. Neither side conceded much after that, but Cheslik finally pushed the Hawks back out in front once again, bundling home the rebound of her saved shot.

But hopes of a win were dashed when Natasha Ntone Kouo was clipped down in the penalty area. Corboz stepped up and calmly slotted the penalty home as the two sides shared a point.

The No. 4 ranked forward in the 2016 IMG Academy 150 couldn’t be stopped by Bethesda. Westendorf opened the scoring with a beautiful strike from outside the box, rifling home a left-footed shot from 25 yards out that found the back of the net.

Westendorf scored another before the break, controlling a loose ball in the area and burying her shot to the far post. The Maryland side, playing without U.S. youth international Mia Gyau, pulled a goal back when Alizah Johns-Boehme scored to cut the deficit to 2-1.

After the break, Gwinnett pulled away, as Westendorf picked up her hat trick before the team added two more to finish up the scoring.

A pair of goals from Danielle Hogarth helped an undermanned Freestate side overcome a tough and tenacious Orlando team during the early hours of the morning.

Hogarth struck twice in the second half as the Maryland side navigated its way past the feisty Florida bunch. Without midfielder Casey Martinez (injury) and forward Margaret Purce (national team duty), Freestate was on the back foot at times during the match, as forward Sarah Medina showed her quality, holding up the ball and getting in behind the opposing defense.

But thanks also to a strong performance from Megan Hinz in the Freestate goal, Medina and her strike partner Gracen Jacks were kept at bay for the majority of the day, allowing Hogarth’s tallies to stand up as the decisive margin.

Like in most games, the wind quickly became a factor, perhaps no more than in the clash of these two western-based clubs.

After a 0-0 first half, SC Del Sol quickly seized the initiative with the wind at their backs. Midfielder Nicole Seaman bagged a goal from 25 yards out to edge SC Del Sol out in front, and it quickly became a two-goal lead when Bethany Block rounded the Strikers FC ‘keeper and scored.

As the wind picked up, it was harder and harder for Strikers to find a way into the game – and when Block added her second of the game, the result was no longer in doubt.

In a game that was much closer than the final score indicates, the San Diego Surf bagged three goals in the game’s final 15 minutes to pick up the lopsided victory.

For the majority of the game, little separated the two sides, as they traded goals in the first half – though the Surf should have been in the lead, as Pilar Torres saw her penalty saved by the FC Dallas goalkeeper.

The Surf did edge out in front shortly after the break, as Jessica Morales’ wind-added corner kick went straight into the net to make it a 2-1 game. Torres, Morales and forward Kyra Carusa were all a handful and with the wind in their favor, the Surf slowly began to take control of the game.

But first, FCD would tie the game off a set piece, Natalie Schmutz glancing a header home off a lofted cross from just inside the halfway line. The goal sparked life into the Texas side, though it wouldn’t last long.

After the equalizer, the Surf really turned things on, tacking on three more as Torres and Carusa were too much for the FCD defense to handle – Torres scoring one of the nicest goals of the day as her angled, glancing header off a tidy Carusa cross found the back post and glanced in.

The California side played them tough, but one of several talented PDA squad in action on Saturday got the win.

A powerful header from Bryce Watts from a corner kick broke a 1-1 deadlock, and the home side added a late insurance goal to pick up the win in front of friends and family.

It actually looked like the day would end in disappointment, as a plucky Real So Cal side showed little fear, getting on the board first thanks to a smart header from Courtney O'Brien, who was a thorn in PDA's side all afternoon. U.S. youth national team forward Taylor Racioppi, another player who enjoyed a strong showing in the game, equalized from distance to make tie the game.

Before Watts nudged PDA back out in front, Real So Cal certainly had their chances, with most coming through O'Brien as well as storming runs down the flank by Paige Fecske. However, their inability to cash in on those opportunities was ultimately punished by Watts.